“....the Abbot was arrayned, and the next daye putt to execution, with ii. other of his monkes, for the robbyng of Glastonburye Churche ; on the Torre Hill, the seyde Abbottes body beyng devyded in fower partes, and his heedd stryken off, whereof oone quarter stondyth at Welles, another at Bathe, and at Ylchester and Brigewater the rest, and his hedd upon the abbey gate at Glaston." - Letter of 16th November 1539, Lord Russell to Thomas Cromwell.

The Final days of Richard Whiting
The years from 1530 – 1539 were a politically complex time driven by a desperate monarch wanting for a legitimate male heir and financial gain. The Dissolution of the Monasteries provided a means of achieving both. Systematic eviction of the religious communities from their houses with seizure of their assets for the crown was the order of the day, the buildings extensively robbed, with lead, glass and facing stones removed for reuse elsewhere.  Glastonbury, the penultimate Abbey to be dissolved, survived until the autumn of 1539. Finally, with the fall of Waltham Abbey, the scheme faltered with the death of Thomas Cromwell, the Vicar General, sent to the block in 1540 for his disastrous involvement in the arrangement of Henry VIII's fourth marriage to Anne of Cleves, who the king divorced just six months later.

The Last Abbot of Glastonbury, Richard Whiting, along with two other monks, the Abbey treasurers John (Arthur) Thorne and Roger James (Wilfrid), being indicted of treason, were sentenced to be hanged, drawn and quartered.  On 15 November 1539, following a mock trial at Wells the previous day, the three were taken to Glastonbury. On the outskirts of the town the old Abbot was spread-eagled across a horse drawn hurdle and dragged through the streets of Glastonbury, past the desolate Abbey and up the Tor for the vile execution. 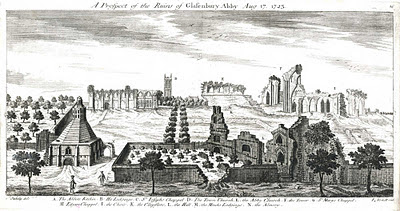 Imprisonment and execution of the head of the establishment was not unusual during the dark days of the Dissolution. John Marshall, the last Abbot of the Benedictine Abbey of St. John's at Colchester, was convicted of treason and hanged on 1st December 1539. His crime was to refuse to acknowledge the King of England, Henry VIII, as head of the Church, and to resign the property of his abbey over to the crown. Indeed, on the same day as the execution of the three Glastonbury monks, the last Abbot of Reading, Hugh Cook Faringdon, along with two other monks John Rugge and John Eynon, were executed, also suffering the ultimate humiliation of the traitor's death.

Like Whiting and many other Abbots, in 1530 Faringdon signed petitions to the Pope supporting Henry VIII’s divorce and in 1536 took the oath of Royal Supremacy. The King had even called Faringdon “his own abbot”, and made him Royal Chaplain in 1532. But like Abbot Whiting, Faringdon's fall from grace in 1539 was swift, predetermined and terminal.

There were rumours that Faringdon was connected to the Exeter Conspiracy and he was accused of funding the rebels in the Northern uprisings, a brief period of Roman Catholic dissent against the Church of England and the dissolution of the monasteries following the closure of Louth Abbey resulting in the Lincolnshire Rising. It would seem that at the trial some attempt was also made to implicate Eynon in the brief York uprising, known as the Pilgrimage of Grace, which followed.

Yet, ultimately the charges levelled against Faringdon were of upholding papal supremacy on three separate occasions. Faringdon had refused to retract his loyalty to Rome, “they had confessed before and written it with their own hands that they had committed high treason against the king's majesty,” He was subsequently imprisoned at the Tower and indicted of high treason and taken to Reading where, on November 15th, after being dragged through the town, he and two fellow monks, were hung, drawn and quartered before the Abbey gates. After his death the Abbey was dissolved, its lands and goods taken by the Crown with the monks, under suspicion of complicity in their Abbot's alleged treason, not awarded pensions normally provided under the Dissolution of the Monasteries.

But the Abbot of Glastonbury made no such admission; Whiting asks “forgiveness, first of God, and then of man, even of those who had most offended against justice in his person and had not rested until they had brought him to the gallows”. In their final moment, his two monks, John Thorne and Roger James, begged forgiveness of all and "took their death also very patiently." Even Pollard, the Royal Commissioner who had played no small part in orchestrating the Abbot's downfall, seemed moved by the moment, showing a rare touch of compassion, added "whose souls God pardon." 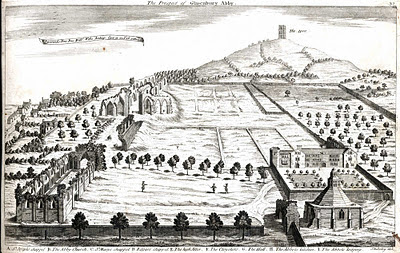 Yet, unlike the Abbots of Colchester and Reading, there appears to be no evidence of the Abbot of Glastonbury denying the King of England as head of the Church, or refusing to resign the property of his abbey to the Crown. Whiting had after all signed the petition to the Pope supporting Henry VIII’s divorce and in 1536 he had taken the oath of Royal Supremacy. Although records for Whiting's interrogation and trail are incomplete with key documents missing from archives, from what sources that have survived, the charge of treason seems to have been changed at the mock trial at Wells at the last minute to one of robbery, suggesting that treasures that the Royal Commissioners thought to be in Glastonbury Abbey could not be found. What were they searching for?

Too much of the last days of Richard Whiting fail to make any sense. Glastonbury was the largest and wealthiest Abbey in England, the Benedictine Monastery owned extensive lands and manors in the West Country. There was no attempt to preserve the Abbey for the Crown. Pillage of the Abbey treasures was the soul aim. The buildings ripped apart, lead, glass and facing stones removed, and the library ransacked with books sold off for a quick price. The King needed cash, not more property to maintain. Within a few weeks of the Abbot's execution, Abbey lands were being passed down to those who assisted the Crown in its downfall, like vultures picking over the carcass. One such was the knight Sir Thomas Dyer, member of parliament for Bridgwater during the mid-sixteenth century, who acquired lands from the former holdings of Glastonbury Abbey, obtaining Sharpham Park, which included the Abbot's manor, immediately after the dissolution in 1539 and a few years later the Manor of Street. Dyer soon held former Abbey lands at Weston, Middlezoy, Othery, Glastonbury, Greinton, and elsewhere.

The whole episode of Glastonbury Abbey's downfall and the execution of its Abbot raise some startling questions: why was Whiting and his two fellow monks executed on Glastonbury Tor; why not outside the Abbey gates as with the Abbot of Reading; why the Tor?

The execution is reminiscent of a scene from the crucifixion. The hanging and dismemberment on the Tor possesses elements of ritual execution. One is compelled to agree with Arthurian scholar, the Avalonian Geoffrey Ashe, who knows the Tor better than many and states, “If the object was to strike terror, the place to do it was in the town. The ascent of the Tor was the act of madmen or mystics …”

In 1538 Abbot Whiting had received assurances from the Vicar General, Thomas Cromwell, that the Abbey was not under threat. At some time there appears to have been a change in the game plan. When the Royal Commissioner Richard Layton visited the abbey in 1535, he had given it a complete clean bill of health, reporting that “there is nothing notable; the brethren be so straight kept that they cannot offend,” he even praised the Abbot to Cromwell. In the same year Nicholas FitzJames, as friend of the Abbot, had written to Cromwell supporting Richard Whiting and petitioning against the Vicar General's impracticable injunctions upon Glastonbury.

Yet when he returned a few years later in 1539 Layton retracts his praise of Abbot Whiting with these odd words: “The Abbot of Glastonbury appeareth neither then nor now to have known God, nor his prince, nor any part of a good Christian man’s religion.” Further, according to a letter written by Pollard on the 16th November, Nicholas FitzJames was one of the jurors at the trial of the Glastonbury three at Wells, along with Thomas (Jack) Horner, the Abbot's steward. Friends turned into enemies, trustees became traitors. Why did fortune change for Whiting in just a few short years?

Indeed, Pollard's comments make Whiting sound like an ungodly man who worshipped something else. Clearly Whiting's faith had no bearing on the matter and the old Abbot went silently to his death like the guardian of some great secret. And with the destruction of the Abbey the Secret of Glaston, which some say to this day lies beneath the floor of the old Abbey, was irretrievably lost.


"This church, then, is certainly the oldest I know in England, and from this
circumstance derives its name (vetusta ecclesia)... In the pavement may be seen
on every side stones designedly inlaid in triangles and squares and figured with
lead, under which, if I believe some sacred enigma to be contained...." 1

Continued in Part III: The Bones of Richard Whiting


Notes
1. This mysterious passage is contained in the history of the Abbey written by William of Malmesbury in the early 12th century; De Antiquitate Glastoniensis Ecclesiae.