Arthuriana: Early Arthurian Tradition and the Origins of the Legend 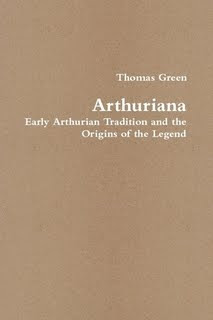 Following the publication of 'Concepts of Arthur' by Tempus in January 2008, Thomas Green has now issued a hard copy collection of the academic and popular articles which have appeared on his ‘Arthurian Resources’ website since 1998.

Arthuriana: Early Arthurian Tradition and the Origins of the Legend was published by The Lindes Press on 31 October 2009. This book has been created in response to requests from readers for a print version of the material on the website, for both ease of reading and referencing of the material archived online; as such, the articles from the website are reproduced with the minimum of alteration but have been professionally typeset and formatted.

However, be warned, if you are looking for yet another identification for the historical King Arthur you won't find him in Green's work, who concentrates on the Arthur before Geoffrey of Monmouth, pre-Galfridian, the Arthur of early welsh poetry who was accompanied on his adventures by an early mythological pantheon of Gods. This Arthur is far removed from the knight in shining armour of Mallory's tales.

This work on Green's Arthurian Resources website was the precursor to the book 'Concepts of Arthur', published last year, presenting a detailed study of the ultimate origins of Arthur and the nature and development of the early Arthurian legend, providing a comprehensive overview of recent scholarship, including the author's own academic research into the sources of the early Arthurian tradition.

Fundamentally, 'Concepts of Arthur' provides an analysis of the entire non-Galfridian Arthurian legend. Unlike many previous studies of Arthur, it avoids a priori assumptions about the origin and development of the Arthurian legend, preferring to argue from first principles. Most importantly, it considers the 'historical Arthur' as a genuine part of the tradition itself, to be treated alongside – and not artificially separated from – all the rest of the early source material.

Green knocks down the myths of later Arthurian Romance, without ever 'poo-pooing' them, and presents a stripped down, originally folkloric or mythical figure who became historicised in the 9th century, but in doing so never comes across as negative or anti-Arthur, and produces the most common sense approach yet to the eternal enigma of Arthur.

Arthuriana: Early Arthurian Tradition and the Origins of the LegendThomas Green
Contents:

Preface
1. The Historicity and Historicisation of Arthur
2. A Bibliographic Guide to Welsh Arthurian Literature
3. A Gazetteer of Arthurian Onomastic and Topographic Folklore
4. Lincolnshire and the Arthurian Legend
5. Arthur and Jack and the Giant-killer
* Jack & Arthur: An introduction to Jack the Giant Killer
* The History of Jack and the Giants (1787)
* The 1711 text of The History of Jack and the Giants
* Jack the Giant Killer: a c.1820 Penny Book
* Some Arthurian Giant Killings
6. Miscellaneous Arthuriana
* An Arthurian FAQ - Some frequently asked questions.
* The Monstrous Regiment of Arthurs - A critical guide.
* An Arthurian Reference in Marwnad Gwên? - the manuscriopt evidence examined.
* The Other Early Arthurian Cycle: the Tale of Tristan and Isolt.
* Myrddin & Merlin - a guide to the early evolution of the Merlin Legend.
* 'But Arthur's Grave is Nowhere Seen' - Twelfth-century and later solutions to Arthur's current whereabouts.
* Bibliographic guide to the characters of the Pre-Galfridian Arthurian legend.
* A Guide to Arthurian Archaeology


Arthuriana: Early Arthurian Tradition and the Origins of the Legend is available online as a 'Print on Demand' book and can be either purchased directly from the print company Lulu (from October 2009 onwards) or from Amazon (from January 2010).