Mystery has surrounded the identity of the group since they were discovered at Ridgeway Hill, near Weymouth, in June 2009. It is one of the largest examples of executed foreigners buried in one spot. Any mass grave is a relatively rare find, but to find one on this scale, from this period of history, is extremely unusual. Archaeologists from Oxford believe the men were probably executed by local Anglo Saxons sometime between 910 AD and 1030 AD. 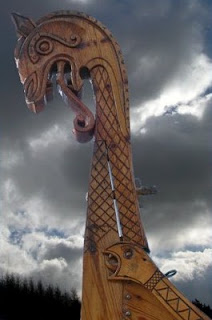 The execution trail started in April 2007 Dorset County Council's planning committee gave the go ahead for the construction of a controversial new £80M relief road, a 3.75km (2.3m) stretch of carriageway designed to reduce traffic congestion between the A354 and the A353 routes from Weymouth to Dorchester, due be completed by 2011, prior to sailing events coming to Portland in the 2012 the Olympic Games.

Protesters claimed the new road from Weymouth to Portland will have a major adverse impact on the environment as it is routed across Ridgeway Hill, an Area of Outstanding Natural Beauty (AONB). Campaigners, including Campaign to Protect Rural England (CPRE) and Transport 2000, claimed the route will cut through the legally protected countryside and affect the ancient woodland and a nature reserve. But clearly “protected” status means nothing when it comes to road building.

It was announced that there would be no public inquiry into the road building scheme with the Government confirming it would not interfere in the local planning process. Environmental groups went on to lose a High Court legal challenge to stop the route and in September 2008 Archaeology work started ahead of the building of the relief road through the so-called “protected” countryside of the Dorset Ridgeway and an area of 50,000 sq/m was fenced off in preparation for the start of excavations.

Oxford Archaeology, under the guidance of Senior Project Manager David Score, carried out the advance investigations. Shortly after excavations had begun more than a dozen skeletons thought to be thousands of years old, from the Bronze and Neolithic eras, had been found by the Oxford archaeologists working at the ancient site in Dorset. In various states of preservation, the better condition skeletons were thought to be Roman, archaeologists suspected they had uncovered a burial site on Ridgeway Hill near Weymouth, initially thought to date from the Iron Age, 800BC to early Roman times in the 1st Century AD, after examining pottery found in the pit.

In the summer of 2009 archaeologist started to unearth dismembered skeletons, fifty-one in total found in one burial pit on the site. The pit is thought to be a disused quarry, used out of convenience rather than having been dug specifically for burials. Initial radio-carbon dating returned a date between AD 890 and AD 1030, the classic Viking period in Britain. The remains are all male with the overwhelming majority aged from their late teens to about 25-years-old, with just a small number of older men.

Most of the skulls show evidence of multiple blows to the vertebrae, jawbones and skulls with a large, very sharp weapon such as a sword. The lack of any other finds with the skeletons indicates that the men were probably stripped naked either before being killed or before being buried because there was no evidence of clothing, such as pins or toggles. 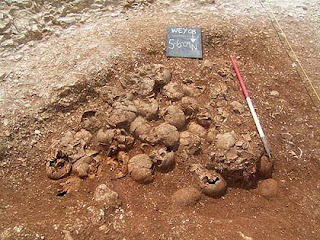 "The time period we are now looking at is one of considerable conflict between the resident Saxon population and invading Danes. The burial location is typical of places used for executions during this time; in a prominent location and next to a main road and a parish boundary. However, the large number of individuals and method used make it unlikely that normal criminal justice is being practised in this instance."

The rare discovery of this mass grave at Ridgeway Hill, gives the impression of being the aftermath of a massacre; decapitated, naked bodies of at least 51 young men found thrown into an old quarry and their heads piled on top. The men had all been executed, their heads hacked off with swords.

The speculation of who the 51 men were has led to suggestions that they may have been a Viking party raiding along the South coast. It has also been suggested that they could have been feuding rival Saxon groups or even Saxons killed by Vikings.

The fact that all 51 were male, generally robust, healthy and strong, most of them were in their late teens to early 20s, with a handful of elders in their 30s, a typical warrior band, would seem to support the theory that they were a group of Vikings landing on the coast, coming inland to raid, and perhaps being caught by the local population.

There appear to be more bodies than skulls, with possibly one or two skulls missing, which could have been the skulls of the bands leaders kept as trophies or perhaps put on stakes as was the Saxon way as evidenced by Bede who tells that at the battle of Maserfeld (Oswestry?) in 642, Oswald of Northumbria was slain by Penda, who 'ordered that his head and hands with the forearms be hacked off and fixed on stakes'. 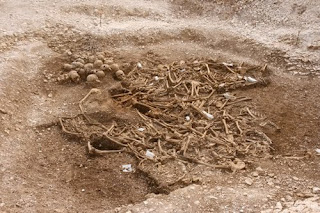 The bodies showed no obvious battle wounds indicating that the men were captives who were executed at about the same time, all decapitated with a very sharp weapon, most probably a sword but it was not a straight one strike and head off. The bodies seem to have all been hacked at around the head and jaw, on one the collarbone has been sliced through. It would appear to have been a rather messy mass execution. One man has had his hands sliced through, he may have been trying to grab hold or fend off the sword as he was being executed. The site is a typical place for a Saxon execution site, on a main road and parish boundary and close to prehistoric barrows.

Context
The next step was to carry out isotope analysis to ascertain the victims origins, which would indicate if they were a Viking raiding party from across the seas from Scandinavia, or from the north of England where Vikings had settled in the Danelaw or even originated from Dorset. Once the origin of the men has been established, it may be possible to establish the historical context of the mass execution. The Anglo-Saxon Chronicle records Viking raids on this area:

980 - ...and in the same year was Southampton plundered by a pirate-army, and most of the population slain or imprisoned.

981 - In this year was St. Petroc's-stow plundered; and in the same year was much harm done everywhere by the sea-coast, both upon Devonshire and Wales.

982 - In this year came up in Dorsetshire three ships of the pirates, and plundered in Portland.

In the Chronicle the term 'pirate' is commonly used for seaborne raiders. In Old English the term 'viking' first appears in the 9th Century as 'wicing' probably derived from wic = 'village, camp' in reference to the raider's temporary camps, while the later Norse raiding armies who settled in England were generally referred to as 'Danes'. In old Norse a 'víkingr' was known as 'one who came from the fjords' the word being found on several Scandinavian rune stones and in the Norse prose histories known as Icelanders' Sagas the word refers to a seaborne warrior taking part in an oversea expedition, such as their famed longship journeys as far afield as the Russian Volga and across the northern Atlantic to Newfoundland in the New World.

Results of the analysis of teeth from 10 of the men, released in March 2010, revealed they had grown up in countries with a colder climate than Britain's. The samples were identified as Scandinavian by Dr Jane Evans and Carolyn Chenery, of NERC Isotope Geosciences Laboratory, part of the British Geological Survey, Nottingham. The men had scattered Scandinavian origins, with one even thought to be from north of the Arctic Circle. Isotopes in the men's teeth also show they had eaten a high protein diet, comparable with known sites in Sweden. However, we must show a little caution with dental analysis as tooth enamel is fixed once the crown has formed therefore the results will only indicate the individual's likely childhood, and not necessarily their adulthood, but it does provide a useful indicator to the homeland of their early years.

Although these results are not conclusive as only 10 of the 51 have been sampled, it does appear to indicate that they were indeed a Viking group raiding along the south coast of Britain, that had ventured a short distance in land, captured by the locals and executed, their bodies stripped and thrown into an old quarry. It is hoped further insight into the lifestyles and activities of the warriors will come to light as the analysis continues.

It is tempting to speculate that they may have been part of the Viking raid on Portland in 982 AD recorded in the Anglo Saxon Chronicle, as more accurate radio-carbon dating has returned a period of between 910 – 1030AD.