1. The Island of Apples

Writing around 1150 in the Vita Merlini, Geoffrey of Monmouth introduces the Island of Apples as the place where Arthur is taken to be healed of his wounds after the battle of Camlann.

"The island of apples, which is called the Fortunate island has its name because it produces all things for itself. There is no work for the farmers in plowing the fields, all cultivation is absent except for what nature manages by herself. On its own the island produces fertile crops and grapes and native apples by means of its own trees in the cropped pastures. On its own the overflowing soil puts forth all things in addition to the grass, and in that place one lives for one hundred years or more. There nine sisters give pleasant laws to those who come from our parts to them, and of those sisters, she who is higher becomes a doctor in the art of healing and exceeds her sisters in excellent form. Morgen is her name, and she has learned what usefulness all the herbs bear so that she may cure sick bodies. Also that art is known to her by which she can change shape and cut the air on new wings in the manner of Dedalus. When she wishes, she is in Brist, Carnot, or Papie; when she wishes, she glides out of the air onto your lands. They say that this lady has taught mathematics to her sisters Moronoe, Mazoe, Gliten, Glitonea, Gliton, Tyronoe, and Thiten the most noteworthy on the cither. To that place after the battle of Camblan we brought Arthur, hurt by wounds, with Barinthus leading us, to whom the waters and the stars of the sky were known. With this guide for our raft we came to that place with our leader, and with what was fitting Morgen did honor to us, and in her rooms she placed the king upon a golden couch and with her own honorable hand she uncovered his wound and inspected it for a long time, and at last she said that health could return to him...." - excerpt from Vita Merlini by Geoffrey of Monmouth

Geoffrey's Island of Apples is clearly based of The Fortunate Island account by St. Isidore of Seville a 7th Century Bishop:

"... the western limit of the world is furnished by the Fortunate Isles, so named because 'they are blessed with abundance of produce; their woods yield apples naturally, their ranges of hills are clad with unplanted vines and everywhere there are crops and vegetables in place of pasture. Hence the false opinions of pagans, and the poems of secular poets, claiming that these islands were Paradise".

Isidore may in turn have been influenced by The Garden of Hesperides in Greek mythology.
The Hesperides were a group of nymphs who tended a garden in a far western corner of the world, located on a distant blessed island at the edge of the world Ocean.

Geoffrey introduces Morgen as an enchantress of the Island of Apples, capable of healing Arthur after his final battle. Geoffrey's Morgen is based on Circe and Medea, sorceresses from Greek Mythology with a Celtic twist in her name, probably from the Morrigan.
Morgen, before she became the dark witch Morgan le Fey and tales of incest by the Grail Romancers, was respected by Geoffrey as the head of the nine maidens on the Island. 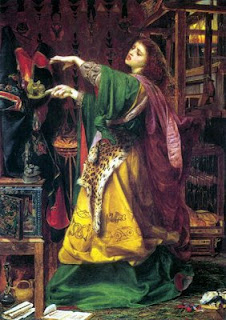 ‘It is Morgan le Fay,’ he said. ‘It is difficult to explain her.’
‘I should not try.’ …
The Wart thought it was time to ask a tactful question, so he made a polite cough and said: ‘Please, who is Morgan the Fay?
All three answered at once.
‘She’m a bad ‘un,’ said Little John.
‘She is a fairy,’ said Robin.
‘No, she is not,’ said Marian. ‘She is an enchantress.’

Morgan the Enchantress - Skilled in the arts of healing and changing shape, she ruled Avalon. (painting by Frederick Sandys, 1864)

MERLIN AND THE GLEAM 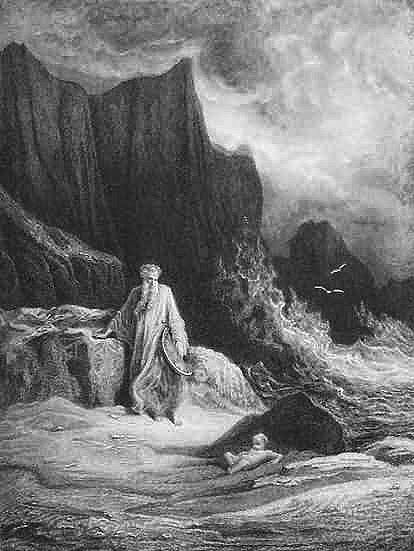 O YOUNG Mariner,
You from the haven
Under the sea-cliff,
You that are watching
The gray Magician
With eyes of wonder,
I am Merlin,
And I am dying,
I am Merlin
Who follow The Gleam.

Mighty the Wizard
Who found me at sunrise
Sleeping, and woke me
And learn'd me Magic!
Great the Master,
And sweet the Magic,
When over the valley,
In early summers,
Over the mountain,
On human faces,
And all around me,
Moving to melody,
Floated The Gleam.

Once at the croak of a Raven who crost it,
A barbarous people,
Blind to the magic,
And deaf to the melody,
Snarl'd at and cursed me.
A demon vext me,
The light retreated,
The landskip darken'd,
The melody deaden'd,
The Master whisper'd
"Follow The Gleam."

Then to the melody,
Over a wilderness
Gliding, and glancing at
Elf of the woodland,
Gnome of the cavern,
Griffin and Giant,
And dancing of Fairies
In desolate hollows,
And wraiths of the mountain,
And rolling of dragons
By warble of water,
Or cataract music
Of falling torrents,
Flitted The Gleam.

Down from the mountain
And over the level,
And streaming and shining on
Silent river,
Silvery willow,
Pasture and plowland,
Horses and oxen,
Innocent maidens,
Garrulous children,
Homestead and harvest,
Reaper and gleaner,
And rough-ruddy faces
Of lowly labour,
Slided The Gleam.--

Then, with a melody
Stronger and statelier,
Led me at length
To the city and palace
Of Arthur the king;
Touch'd at the golden
Cross of the churches,
Flash'd on the Tournament,
Flicker'd and bicker'd
From helmet to helmet,
And last on the forehead
Of Arthur the blameless
Rested The Gleam.

Clouds and darkness
Closed upon Camelot;
Arthur had vanish'd
I knew not whither,
The king who loved me,
And cannot die;
For out of the darkness
Silent and slowly
The Gleam, that had waned to a wintry glimmer
On icy fallow
And faded forest,
Drew to the valley
Named of the shadow,
And slowly brightening
Out of the glimmer,
And slowly moving again to a melody
Yearningly tender,
Fell on the shadow,
No longer a shadow,
But clothed with The Gleam.

And broader and brighter
The Gleam flying onward,
Wed to the melody,
Sang thro' the world;
And slower and fainter,
Old and weary,
But eager to follow,
I saw, whenever
In passing it glanced upon
Hamlet or city,
That under the Crosses
The dead man's garden,
The mortal hillock,
Would break into blossom;
And so to the land's
Last limit I came--
And can no longer,
But die rejoicing,
For thro' the Magic
Of Him the Mighty,
Who taught me in childhood,
There on the border
Of boundless Ocean,
And all but in Heaven
Hovers The Gleam.


The Gleam
Unrelated to Idylls of the King, “Merlin and the Gleam” holds a special place in a study of the Arthurian poetry of Tennyson. Disliking the notion of a long, formal biography, Tennyson wrote the poem "for those who cared to know about his literary history".1

Merlin's pursuit of Nimue, unrelated to the story of her seduction of the aged soothsayer that stands behind Romance tales of Merlin and Vivien, represented the poet's pursuit of his literary vocation.
Of Merlin and the Gleam, written in 1889, Tennyson says, "In the story of Merlin and Nimue I have read that Nimue means the Gleam - which signifies in my poem the higher poetic imagination. Verse IV is the early imagination, Verse V alludes to the Pastorals."

Wordsworth was another poet who identified the "Gleam" as the "fitful nature of inspiration" in
Elegiac Stanzas Suggested by a Picture of Peele Castle in a Storm, Painted by Sir George Beaumont (1806):

“Ah! then , if mine had been the Painter's hand,
To express what then I saw; and add the Gleam,
The light that never was, on sea or land,
The consecration, and the Poet's dream;”

Without doubt Tennyson's identification of Nimue  with the "Gleam" resulted from his reading of the poem "Merlin" by the Scottish poet, philosopher, and historian John Veitch (April 1889).

Veitch writes of the Merlin of the North, Merlin Caledonius, known also as Merlin Wylt and Silvestris, and stresses he should not be identified with Myrdin Emrys, or Merlin Ambrosius, the prophet of Vortigern. The is the Merlin who was present at the battle of Ardderyd in 573 who, after the defeat of his leader Gwenddoleu and his army, fled into the Caledonian forest.

In Veitch's poem, “The Gleam” is Merlin's early love, the Hwimleian, who appearing as a glint on the hill, sings:

“The daughter of the Sun, I come,
His joy, his free first-born;
As birthright fair the gleam I wear
Of the golden hair of morn.”

From the earliest accounts of Merlin the wizard has been attached to sources of inspiration. Veitch's Merlin seems to have been inspired by the Myrddin poems from the Red Book of Hergest and the Black Book of Carmarthen centred on the Merlin (Myrddin) of the North. Veitch's poem is a conversation between Merlin, Gwendydd (The Dawn) his twin-sister and Hwimleian (The Gleam) his early love. This is reminiscent of Cyfoesi Myrddin a Gwenddydd ei Chwaer ('The Conversation of Myrddin and his Sister Gwenddydd').

In the Myrddin poems from the Books of Hergest and Carmarthen the Hwimleian is a spirit, the Voice of the Forest and the source of the wizard's prophetic inspiration.

Posted by Edward Watson at 16:42 No comments: