Saint Cynwyl
The earliest account of the survivors of Arthur’s last fateful battle at Camlan is found in the 11th century tale Culhwch and Olwen. Embedded in this tale is a triad reciting the three survivors of the battle: Morfran son of Tegid, Sandde Angel-face and Cynwyl Sant, who was the last to leave Arthur, on Hengroeon his horse.

The name of the steed Hengroen means ‘old skin’ and is said to survive in the name Dinhengroen in Abergele on the north coast of Wales, but quite why a settlement should be named after a horse is beyond me. 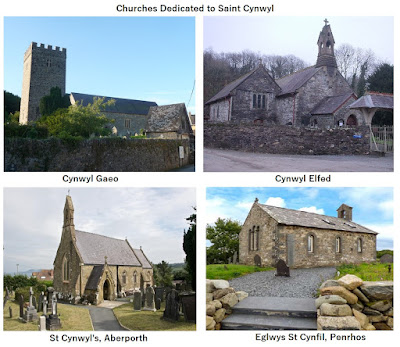 This is probably the Saint who was patron of Cynwyl Gaeo and Cynwyl Elfed in Ystrad Tywi, a region of south-west Wales situated on the banks of the River Tywi that was to become the county of Carmarthen.  It is said there is a place in the River Annell where the saint used to kneel in the cold waters and pray. Farmers would scoop water from the depressions made by Cynwyl’s knees and pour it over their cattle to purify them. Alternative stories claim that Cynwyl Gaeo is named after the giant, Cynwil Gawr.

Located between Llandovery and Lampeter is the village of Gaeo; at the centre of the settlement stands the parish church, a grade II listed building, dedicated to St Cynwyl. This church stands on an ancient site occupying a position near the Roman road linking the Roman forts at Llandovery (Alabum) and Llanio (Bremia) to the Roman gold mines at Dolaucothi. This ancient road remained in use as a Drover's road until the 18th century. Wirt Sikes, who studied Welsh folklore, noted the survival of Roman names in the parish, a people, he said, who pride themselves in their Roman descent.

Cynwyl Elfed is situated about 5 miles north of Carmarthen. The church of St Cynwyl at Elfed is said to have been founded in the 6th century, although like many ancient churches little survives of the original structure today as many were rebuilt in medieval times and restored again in later times. The enclosures (llannau) of the earliest Celtic Welsh Saints were typically circular, or oval, and rather tellingly the churchyard at Cynwyl Elfed is curvilinear and bounded by the Afon Duad to the east. Two churches with the same patron saint in close proximity almost certainly indicates the existence of a local cult.

It seems Saint Cynwyl is also remembered at of Aberporth on the west coast of Wales in Ceredigion, where the church is depicted as St Cynfil's on historic maps. The medieval church was replaced by a new structure in the mid-19th century. 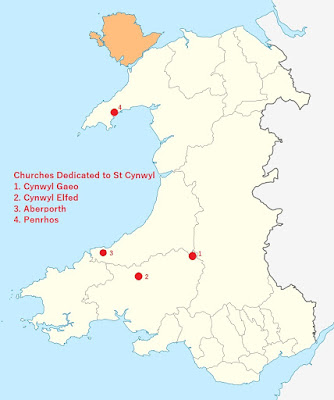 And at Penrhos in Llŷn, North Wales, sometimes called Llangynwyl, is St Cynfil’s church some 2 miles from Pwllheli, on the western shore of Cardigan Bay. This church was, again, a 19th century construction built on an ancient site within a circular churchyard. The Grade II listed building has now been converted to a holiday cottage but the exterior remains unspoilt.

Saint Cynwyl is often confused with a son of King Dunawd of Pabo Post Prydyn of the North Pennines who migrated to North Wales, but this is based on a miss-reading of genealogies of Gwŷr y Gogledd, or Men of the North.

All we have for Saint Cynwyl, the last man to leave Arthur at Camlan, is scant evidence for a local cult at two sites near Carmarthen, singular sites at Aberporth on the west coast of Wales and Penrhos on the Llyn peninsula, and a settlement on the north Wales coast apparently named after his horse.

We can’t even be certain he was a historical person, let alone known of any miracles connected with a St Cynwyl, yet four churches named after the same saint tends to indicate his existence, even if somewhat localised. It is likely he spent his early days around the Carmarthen area; the highest concentration of churches tends to indicate the main popularity of a saint’s cult. Cynwwyl, like many Celtic Welsh Saints, would have spent the last years of his career on pilgrimage to Bardsey Island (Ynys Enlli), off the tip of the Llyn Peninsula, said to be the burial site of 20,000 saints. On route to Bardsey he may have left the Carmarthen area, moved to Aberporth, his cell becoming popular with local people seeking cures to their ills, before making his way to Penrhos where he founded a church before ending his days at Bardsey watching the sun set over the sea in the west. 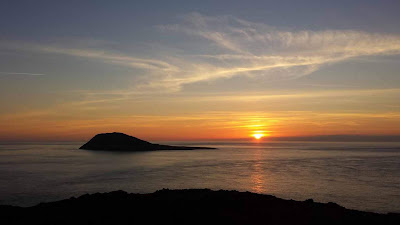 In conclusion, very little is known of St Cynwyl; he is absent from most books on the Celtic Welsh Saints. And even more obscure is his relationship with Arthur and his presence at the battle of Camlann and why he appears in the Triad embedded in Culhwch and Olwen with Morfran and Sandde. Neither St Cynwyl, or his horse Hengroen, appear to provide any clues in plotting the location of Camlann.

Email ThisBlogThis!Share to TwitterShare to FacebookShare to Pinterest
Labels: Camlann


The Mabinogi: A Book of Essays
Edited by C. W. Sullivan III
First published 1996 by Garland Press
Reissued in 2015 by Routledge Revivals 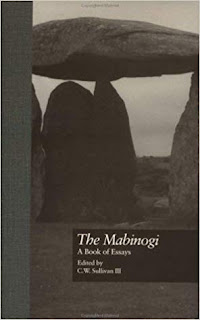 The Lost Tale of Dylan in the Fourth Branch of the Mabinogi
"Throughout the Four Branches of the Mabinogi, the mystical Otherworld encroaches upon the realm of mortal kind, and one of the more powerful appearances of it takes the form of animals that participate in metamorphoses with human figures. These can signify an Otherworld incursion into mortal nature in several different ways. They can signal a thinning of the barriers between the realms of the Otherworld and this world; they can represent characteristics associated with the mysteries of fertility and tribal magic; and they can appear to enhance or, at times, take the place of the principal figures in the tales. It is this third role of Otherworld animals that I wish to concentrate on, because among the many named, and hence characterised animal shapes into which figures are transformed, we come across an unnamed animal whose dis-closure may shed light on the puzzle of the lost tale of Dylan in the Fourth Branch." - Sarah Larratt Keefer


The purpose of this collection, which was first published in 1996, is to provide both an overview of the major critical approaches to the Four Branches of the Mabinogi and a selection of the best essays dealing with them. The essays examine the origins of the Mabinogion, comparative analyses, and structural and thematic interpretations. This book is ideal for students of literature and Medieval studies.

Part 1: Origins
1. The Mabinogion and  Lady Charlotte Guest Rachel Bromwich
2. The Date of the Four Branches of the Mabinogi T. M. Charles-Edwards;

Posted by Edward Watson at 21:32 No comments: