Murder and the Making of a Saint

By the mid-12th century Thomas Becket was one of Henry II’s closest friends and most trusted advisers. Yet within twenty years the relationship had turned sour and Becket, now Archbishop of Canterbury, was murdered in his cathedral by four knights associated with the King.

This exhibition at the British Museum from 20 May to 22 August 2021 tells the dramatic story of Becket’s life and the murder that shook the Middle Ages. 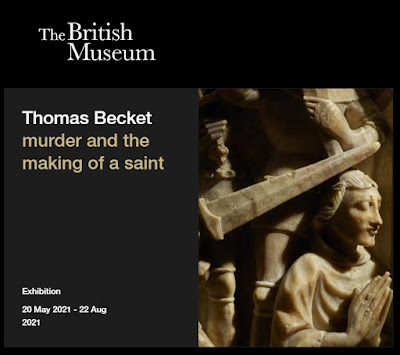 Born about 1119 on Cheapside, London, on 21 December, the feast day of St Thomas the Apostle, Becket began working as a clerk in the service of Theobald of Bec, Archbishop of Canterbury, when King Henry II first noticed him. He was soon promoted and by 1154, Theobald named Becket Archdeacon of Canterbury. Held in such high esteem by the King that when Archbishop Theobald died on 18 April 1161 in his palace in Canterbury Becket was quickly named as his replacement.

Becket was ordained as a priest on 2 June 1161 and the very next day consecrated Archbishop of Canterbury. The rapid appointment did not hold the approval of many in the English Church who saw Becket as unfit for office on numerous accounts and quickly won the resentment of the monks of Canterbury Cathedral who would normally elect the archbishop.

On his appointment Becket immediately began to distance himself from royal policy and argued over Church lands with the nobility. He constantly sent requests to the Pope to assert the authority of Canterbury over York. It was as if overnight he had become the opponent of the king switching allegiance from the Crown to defender of the privileges of the Church.

The rift between the two men became absolute in 1164 when Henry introduced a set of legislative procedures known as the Constitutions of Clarendon in an attempt to restrict ecclesiastical privileges and reduce the authority of the Church and the Pope in England.

The sixteen articles forming the constitutions was the King’s attempt to establish clear demarcation between Church and royal authority. Yet the issue of heinous clerics led to the relationship between the two men deteriorating further throughout the summer. Henry was informed that in the nine years since he became king over one hundred murders and many other criminal acts committed by clerics had gone unpunished.

With Becket opposing the king at every opportunity Henry aimed to have the archbishop removed for being in breach of the Constitutions of Clarendon. Judicial proceedings were brought against Becket at Northampton castle but he refused to listen to the final judgement and walked out of the room. He fled England not to return for five years.

Henry made efforts at reconciliation with Becket at Montmirail  and then Montmartre in 1169 to no avail. The following summer he crossed The Channel bringing his eldest son to Westminster Abbey where the younger Henry was anointed king by the archbishop of York.

When Henry, feasting at his Christmas court in Normandy, heard what Becket had done he is said to have he uttered the words:

“will no one rid me of this troublesome priest?” 1

Within days, the archbishop had been murdered. On 29 December 1170, Becket was assassinated in Canterbury Cathedral by four knights with close ties to King Henry II, an act that sent shockwaves across Medieval Europe. Soon after his grisly death, Becket was canonised by Pope Alexander III.

The Exhibition
Marking the 850th anniversary of his brutal murder, this special exhibition at the British Museum presents Becket's tumultuous journey from a merchant's son to an archbishop, and from a revered saint in death to a 'traitor' in the eyes of Henry VIII more than 350 years later.

The exhibition provides the visitor with a unique opportunity to get close to the man, the murder and the legend through an incredible array of objects associated with Becket; from illuminated manuscripts, some of which include eyewitness accounts of the murder, to jewellery and sacred reliquaries. The exhibition features objects from the British Museum collection as well as important loans from major collections across the UK and Europe, including an entire medieval stained glass window on loan for the first time from Canterbury Cathedral.

>> The Thomas Becket Exhibition: Murder and the Making of a Saint
The British Museum - 20 May to 22 August 2021

Further Reading:
The Sword that Killed Thomas Becket
The Mystery of Becket’s Bones

Notes:
1. This phrase has been incorrectly recorded throughout history. Henry II actually said: “What miserable drones and traitors have I nurtured and promoted in my household who let their lord be treated with such shameful contempt by a low-born clerk!” - Dan Jones, The Plantagenets: The Kings who made England, William Collins, 2013.

Posted by Edward Watson at 23:30 No comments:

The Green Knight is an American epic fantasy adventure film produced and directed by David Lowery based on the 14th-century Middle English chivalric romance. The anonymous poem is one of the best known Arthurian tales, its plot combining the beheading game and the exchange of winnings. David Lowery's Green Knight is a fantasy re-telling of this classic story in a fresh and bold spin on a classic tale from the knights of the round table.

The Green Knight tells the story of Sir Gawain, King Arthur's headstrong nephew, played by Dev Patel, who embarks on a quest to confront the gigantic green-skinned stranger who bursts into King Arthur's hall laying down a challenge to the knights. In this fantasy version Gawain contends with ghosts, giants, thieves, and schemers in what becomes a deeper journey to define his character and prove his worth in the eyes of his family and kingdom by facing the ultimate challenger.

>> The Quest for the Green Knight

Posted by Edward Watson at 12:21 No comments: