The Fire of the Sons of Constantine


Little Doward Hillfort
The ancient fortress at Little Doward occupies a substantial hill, peaking at 724ft at the north west corner of the ramparts, an outlier to the Great Doward and Lord's Wood massif on the north bank of the River Wye, some 2 miles from Monmouth in Herefordshire. The single rampart hillfort was constructed in the Iron Age but the history of the Doward's goes back many years beforehand.

In Post-Roman days this area was known as Erging (or Ercing) centred on the Roman town of Ariconium. Later the English called the region Archenfield. Today, the area of western Herefordshire sits in the shadow of the Black Mountains hosting a number of Arthurian sites such as the prehistoric Arthur's Stone and the tomb of Arthur's son, Amr.

Several limestone caves in the area have yielded prehistoric remains, such as giant elk, hyena, mammoths, woolly rhino, cave bear and lion, including tools from the Palaeolithic period which ended around 10,000 years ago. Finds suggest the caves have been used through the Bronze Age to the Romano-British Iron Age. 19th century claims that a Roman coin hoard dating to 267 AD was unearthed here are unfounded, with no apparent evidence of a Roman presence at the hillfort. Mounds across the summit have been interpreted as artificial rabbit warrens constructed in the post-medieval period. Traces of iron mining date to the same period. At the foot of the cliff on a platform directly below the south eastern corner of the hill fort is King Arthur's Hall, or Cave.

King Arthur's Cave
Situated at the foot of a low cliff at the north-western end of Lord's Wood on the hill of Great Doward at Whitchurch near the River Wye, King Arthur's Cave is one of the most well known of the limestone caves located at the Doward, near Symonds Yat in the Forest of Dean. King Arthur's Cave was occupied by man during the upper Palaeolithic making the cave the oldest location associated with the legendary King.

The Arthurian association with this cave is unlike others which claim the King lies sleeping with his knights deep within beyond a secret doorway that can not be found in normal circumstances. The Little Doward cave legend claims that King Arthur hid all his treasures here, then Merlin cast a spell over the cave so that it couldn't be found. The cave is also said to be the site of a legendary underground passage; perhaps Arthur lies sleeping beyond that?

To find the caves take the Symonds Yat West exit from the A40 and follow the signs for the Doward, parking at a lay-by just before reaching the camp site and follow the track down into the woods, past the old quarry.

During the 19th century Richard Blakemore carried out extensive landscaping of Little Doward, apparently cutting away the top of the rampart to make a walkway, and substantially altering the entrance to King Arthur's Cave.

Around the year 1700 the skeleton of a very large man, accompanied by a brass-headed spear, was discovered in the cave. The gigantic bones were presented to a surgeon in Bristol by the name of Pye, who took them with him on a sea voyage to Jamaica, but they were lost when the ship sank. Some link this discovery to the naming of the cave with Arthur.

Caer Guorthegirn
Frederick John Snell considered the old hill fort at Little Doward to be a potential site for Arthur's eighth battle at Guinnion. However, not many commentators would agree with him today, preferring the Roman fort of Vinovium at Binchester, constructed to guard the crossing of the River Wear by Dere Street, the main Roman artery linking Hadrian's Wall to the city of the Legions at York.

In Arthurian times, according to Geoffrey of Monmouth's Historia Regum Britanniae (The History of the Kings of Britain), Vortigern, the high king of Britain infamous for inviting the Saxon's into the country, died by burning in his stronghold. Sure enough Caer Guorthegirn (Fortress of Vortigern) has been identified as Little Doward. However, other stories locate Vortigern's death at other locations across the country, such as Old Carlisle, Cumbria, Salisbury (Stonehenge) and Craig Gwrtheyrn, Llandysul, Dyfed.

The Historia Brittonum (History of the Britons, aka Nennius) describes Caer Guorthegirn as one of the 28 cities of Britain, being located in the region of Gueneri, or Guenessi, usually considered to be in Gwent:

“Then the king assigned him that city, with all the western provinces of Britain; and departing with his wise men to the sinistral district, he arrived in the region named Gueneri, where he built a city which, according to his name, was called Cair Guorthegirn.”

“.... the second is Gwrtheyrn [Vortigern] the Thin, who first gave land to the Saxons in this Island, and was the first to enter into an alliance with them. He.......... exiled the two brothers Emrys Wledig and Uthur Penndragon from this Island to Armorica, and deceitfully took the crown and the kingdom into his own possession. And in the end Uthur and Emrys burned Gwrtheyrn in Castell Gwerthrynyawn beside the Wye......”

This late Triad may well have been influenced by Geoffrey of Monmouth who uses the name 'Cloartius' as a scribal error for ‘Doartius’, i.e. 'cl' for 'd', from the Latin name for Little Doward hill.

Geoffrey's story says that, impressed after Merlin delivered his prophecies (HRB, BOOK VII), Vortigern asks about his own fate. Merlin advises the king to flee the fire of the sons of Constantine, the two brothers, Aurelius Ambrosius and Uther Pendragon, who have set sail from the Armorican shore heading for Britain to seek revenge for their father who Vortigern betrayed and then invited the Saxons into the island. On landing at Totnes, Merlin continues, they will subdue the Saxons; but first they will burn Vortigern besieged in his tower.

And so it happened; on arrival in Britain the Sons of Constantine (Ambrosius and Uther) marched into Cambria, to the town of Genoreu, where Vortigern had fled for refuge. Geoffrey says that town was in the country of Hergin (Ercing), upon the river Gania (Wye), in the mountain called Cloarius:

“Immediately, therefore, they set their engines to work, and laboured to beat down the walls. But at last, when all other attempts failed, they had recourse to fire, which meeting with proper fuel, ceased not to rage, till it had burned down the tower and Vortigern in it.” (HRB, BOOK VIII)

Whereas Geoffrey used the name 'Cloartius' as an incorrect form of the Latin 'Doartius' which is found in most manuscripts with reference to the Doward, in the Brut, the Welsh version of Geoffrey's Historia, we find the hill of the site of Vortigern's fortress called Mynyd Denarth, or Deu Arth, which may have led to the connection of the cave with Arthur.

Vortigern's Grave
The location of the Herefordshire village Ganarew (Genoreu - from old Welsh: Genau rhiw translates as ‘Pass of the hill, or situated between two hills’) only separated from the Doward by the A40 road would affirm the location beside the Wye as the correct site of Vortigern's final stand at Caer Guorthegirn. This is barely a couple of miles from Geoffrey's native town of Monmouth; no doubt he knew the hillfort and may have even visited the site.

A local tradition claims Vortigern's charred remains where buried under Ganarew church situated in the col overlooking Little Doward. The current church at Ganarew, dedicated to St. Swithin, is said to have been built over the foundations of a much older church. In the 12th century it was known as ‘the Chapel of St Thomas at Gueneru’, yet the earliest known dedication appears to have been to St Gwynnog in the 6th century.

The Life and Death of Richard Whiting

1483 - Whiting graduated  with an MA at the University of Cambridge.

1534 - Whiting signs his assent to the Act of Supremacy. The King's commissioner Richard Layton is sent to examine Whiting and the Abbey. Layton reports all in good order, but suspends the abbot's jurisdiction over the town of Glastonbury.

1535 - Suppression of Religious Houses Act brought about the dissolution of the lesser
monasteries.

1536 - The First Suppression Act (1536) and the Second Suppression Act (1539)  results in the disbandment of over 800 religious houses in England and Wales in the period 1536-1541 in which the Crown confiscated their assets during the legal process known as the Dissolution of the Monasteries.

1539 - by January, Glastonbury was the only monastery left in Somerset. On 19th September, Royal Commissioners Richard Layton, Thomas Moyle, and Richard Pollard arrive at Glastonbury without warning. The Commissioners discover a book condemning Henry VIII's divorce from Catherine of Aragon. They also claim to discover evidence that Whiting concealed a number of precious objects. Abbot Whiting is sent to the Tower of London for further questioning.

The commissioners write to Thomas Cromwell claiming that they had now come to the knowledge of "divers (many) and sundry treasons committed by the Abbot of Glastonbury". Pollard  escorts Whiting back to Somerset, reaching Wells on 14th November.

At Wells, we are told, a trial of some sort takes place, and Whiting is found guilty of treason. Next day, Saturday, 15th November, Whiting is taken to Glastonbury with two of his monks, Dom John Thorne and Dom Roger James. On the outskirts of the town, the frail old Abbot is fastened to a sheep hurdle and dragged by horses to the top of The Tor overlooking the Abbey. The three men are hanged, drawn and quartered. Abbot Whiting's head is fixed over the Abbey gate and his limbs exposed at Wells, Bath, Ilchester and Bridgewater. 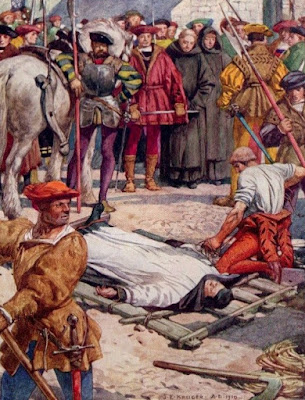 Remembrance
At 10 am on Wednesday, 15th November 2017 there will be a short remembrance of Glastonbury’s Last Abbot, Blessed Richard Whiting in St. Patrick’s Chapel, Glastonbury Abbey, where there will be a brief talk on the life and work of Abbot Whiting at the abbey. Normal entrance fees apply.