Excavations of two Roman sites in Britain during the 1950s revealed a rare glimpse into the Roman mystery religion of Mithraism that flourished throughout the Western Roman Empire from about the 1st to the 4th century.


The remains of an underground temple (Mithraeum) was discovered in 1954 at Walbrook, London, dating to the mid 3rd century, yielding an array of archaeological treasures including marble sculptures of Mithras, Minerva and Serapis, now held at the Museum of London.


Now the Great North Museum: Hancock in Newcastle, which houses the Carrawburgh altars, is bringing many of these finds together to offer a rare opportunity to delve into the story of the worship of Mithras in Roman Britain from two different perspectives. As a god worshipped both in the provincial capital of London and on the northern frontier of Hadrian’s Wall. 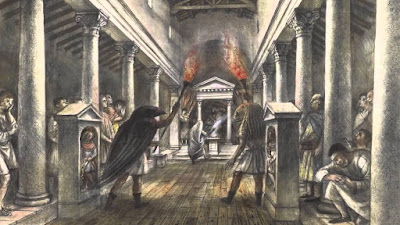 The synergy between the worship of Mithras in Londinium and on Hadrian’s Wall is as important as it is compelling.

Mithras: Roman Religion from Thames to Tyne is on display in the Hadrian’s Wall gallery at the Great North Museum: Hancock, Newcastle upon Tyne until Sunday 27 August 2017.


London's Mithraeum to Re-open November 2017
London’s Roman-era Temple of Mithras, once displayed on a car park roof with a crazy paving floor, is to reopen to the public – this time on its original site. 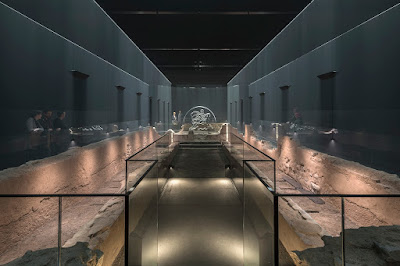 Visitors to the temple will now descend through steep, black stone-lined stairs, in Bloomberg’s new European headquarters, to seven metres below the city streets where in Roman times the smelly river Walbrook once flowed sluggishly through marshy ground. In approximately 240AD, the Romans built a temple next to the river to one of their most mysterious cult figures, Mithras the bull-slayer.

Posted by Edward Watson at 16:06 No comments: