The Book of Taliesin
Poems of Warfare and Praise in an Enchanted Britain
By Gwyneth Lewis and Rowan Williams.
Published by Penguin Classics, June 2019

The great work of Welsh literature, translated in full for the first time in over 100 years by two of its country's foremost poets.

“There are poems here that offer glimpses into fierce battles and the lavish spoils of war, poems to consolidate the poet’s fame and status at the royal courts he serves; poems in a very distinctive voice that shifts unpredictably through time and space, the voice of a poet who writes as though he literally shared the life of the things he celebrates and had witnessed the distant events he recalls;…… containing compositions ranging in date from the ninth – possibly even the sixth – to the thirteenth century…….the Llyvyr Taliessin…...gathers together the kind of songs that may have been sung in the Northern British courts of the sixth century with the poems of Taliesin’s various anonymous successors in an ongoing bardic tradition, which transformed him into a North Welsh prophet, a kind of Christian shaman….” - Lewis and Williams, p. xiii. 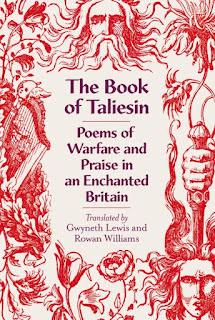 The Book of Taliesin (Llyfr Taliesin) is one of the most famous of Middle Welsh manuscripts, a compilation of poems dating from the first half of the 14th century. It was probably named as such by that 17th century collector of manuscripts Robert Vaughan of Hergest, Herefordshire. Written in a style dated to the first-half of the 14th century the manuscript, containing poetry drawn from several sources, the Book of Taliesin is considered to be a copy made by a single scribe of an older manuscript. The same hand was responsible for copies of the Romance of Geraint and Enid and a copy of a translation of Geoffrey of Monmouth’s Historia Regum Brittaniae which has led to the suggestion that the scribe was a professional working in a scriptorium based at a religious establishment in south or mid-Wales, possibly the Cistercian monastery at Cwm Hir, near Llandrindod Wells in Powys. [Nerys Ann Jones, Arthur in Early Welsh Poetry, MHRA, 2019, p.122]

The persona of 'Taliesin' is something of a mystery (Who is Taliesin?); the first mention of a poet of this name (or title) occurs in the 9th century Historia Brittonum and the earliest poems contained within the Book of Taliesin are said to date from the 6th century. Clearly it cannot be the same man who also wrote the later poems contained therein and dated to several hundred years later. Scholars have toyed with the idea that Taliesin was a title for a bard, and could therefore be used by different people over a long period of time, perhaps a poet laureate type position?

In the introduction of this new book by Gwyneth Lewis and Rowan Williams the authors discuss the many guises of Taliesin, the 'historical' figure, the Shape-Shifter, the Prophet, and the Taliesin Legend, as recorded in the 16th century Hanes Taliesin - none of which poems appear in the Book of Taliesin. The authors continue with In Reading Taliesin, the Poet's Self Representation, and Obscurity in the Poems. The introduction ends with a consideration of the Manuscript and Translation.

We now get to the Taliesin poems, all sixty-one of them translated into English and gathered together in one volume for the first time in a hundred years. The Poems are divided into sections, starting with the Heroic Poems. These are the twelve works considered by the late Ifor Williams to be by the 'Historical' Taliesin, the 6th century poet wrote in praise of Urien Rheged.

Section two features the so-called Legendary Poems, such as the well-known Battle of the Trees, Teyrnon's Prize Song, Ceridwen's Prize Song, The Spoils of Annwfn and the Elegy for Uther Pendragon.

The third section deals with the Prophetic Poems attributed to Taliesin, including the Great Prophecy of Britain (Armes Prydein Fawr) composed in the 10th century, and clearly not be the work of the same Taliesin who wrote of Urien in the 6th century.

The fourth part includes the Devotional Poems, works of a religious nature, followed by two ungrouped poems; Disaster for the Island and In Praise of Tenby.

The authors dedicate the book to Marged Haycock, 'in gratitude and admiration', who's earlier works on Taliesin have clearly had much influence on the authors of this volume.

Oddly, Williams and Lewis's includes a Guide to Welsh Pronunciation but there is no Welsh in this book, and it will be perhaps disappointing to some that the Welsh language versions of these poems are not included. However, that said, the majority of readers will be grateful for the complete collection of Taliesin's works with full translation in English, accessible in one volume.

“those who do not know of the Brindled Ox, with its stout collar,
[and] seven score links in its chain.
And when we went with Arthur, wretched journey,
save seven [men], none returned from Mand[d[wy Fort.”
- Preidu Annwn

This is not a book about the historicity of King Arthur, writes Nerys Ann Jones in the introduction. Neither does it scrutinise the rise in Arthurian literature in Medieval Wales, but examines all the references to Arthur in early Welsh poetry and provides the reader with the necessary means to interpret them. 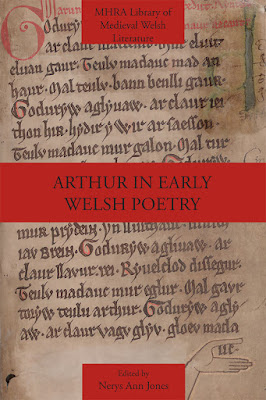 These poetic texts are found throughout four compilations of early Welsh literature produced between 1250 and 1350; The Black Book of Carmarthen, The Book of Aneirin, The Hendregadredd Manuscript, The Book of Taliesin. Many of these texts are thought to be older than their manuscripts sources, yet despite efforts by modern scholars, many of these works are notoriously difficult to date with any certainty.

It is therefore not possible to claim that these poems were composed before Geoffrey of Monmouth’ Historia Regum Britanniae, c.1138, a work that had immense impact on the Arthurian legend. However, these early Welsh poems can be considered largely free of its influence.

These poems portray Arthur in a number of roles; a leader of battles, a warrior with supernatural powers, slayer of giants and witches, rescuer of prisoners from the Otherworld. They bear witness to lost episodes about his father Uthr, his son Llachau, his wife Gwenhwyfar, and his companion Cai. None are narrative texts, yet are are defined by an allusiveness would have been appreciated by their intended audience throughout the Welsh noble courts.

We find here all the classic Arthurian early Welsh poems; The Stanzas of the Graves, Pa Gur, the Gwawrddur poem from the Book of Aneirin, Kat Godeu (The Battle of the Tress), Kadeir Teyrnon, The Elegy for Uthr Pendragon, Preideu Annwn, including poems from other manuscripts, such as The Dialogue of Arthur and the Eagle.

Twenty-six references to Arthur are discussed in this volume. For each poem Jones provides a short discussion, illustration from the manuscript, relevant text in medieval Welsh with English translation and a comprehensive word list.

2 The Book of Aneirin
The Gwawrddur/Gorddur poem

Other titles in the MHRA Medieval Welsh Literature series include:


English Heritage's new £4m bridge linking the 13th Century Tintagel castle to the headland was due to open on Friday 9th August but has been delayed to Sunday 11th August due to storms forecast for the weekend.

Posted by Edward Watson at 20:36 No comments: