The historical mystery of the search for the identity of King Arthur would appear to be never ending until someone unearths a document or archaeological evidence to reveal who the Dux Bellorum of Post-Roman Britain really was. Arthur is claimed by all the Celtic lands of North West Europe: Scotland; Wales; Cornwall; Brittany and so on, with many authors putting forward theories to reveal the identity of this defender of Britain in new books each year. When will it end, when will the true identity of Arthur finally be revealed?

The debate continues as to the origins of the name from the Roman 'Artorius' or from the Welsh 'arth' for bear, or from the circum-polar constellation of Ursa Major with the zodiac representing the Round Table and the constellations as Arthur’s Knights. Certainly we see a very different Arthur after Geoffrey of Monmouth and the French Romancers had spun their tales. In between these two ends of the debate we see continuous speculation as to the identity of an historical Arthur as a Dark Age warlord who rallied the beleaguered Britons against the incursions of the Anglo-Saxons. 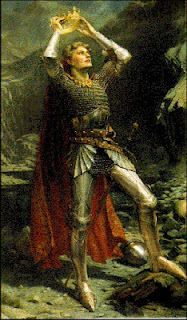 For a short example: Graham Phillips & Martin Keatman identify Arthur as Owain Ddantgwyn, a North Wales warlord [2]; Originally suggested by Kemp Malone and taken up by PFJ Turner and expanded by Littleton & Malcor, Arthur has been identified as Lucius Artorius Castus, a Roman Officer of the 2nd Century [3]; Chris Barber & David Pykitt claim he was Athrwys, a South Wales ruler, who retired to Brittany as St. Armel (Arthmael) [4]; Frank D. Reno sees him one man known by the epithets Ambrosius/Riothamus/Arthur [5]; Geoffrey Ashe identifies Arthur as Riothamus, last seen heading towards Avallon in Burgundy. [6] All entertaining and well presented theories, claimimg the true identity of Arthur revealed and you are left thinking “yes, perhaps, maybe” - but all these works lack one essential element: hard evidence.

Even Dark Age 'histories' have been constructed around a historical Arthur: Leslie Alcock, Arthur's Britain and John Morris, The Age of Arthur: A History of the British Isles from 350 to 650. In 1977 David Dumville, concerned with this growing trend, stated: "The fact is that there is no historical evidence about Arthur; we must reject him from our histories and, above all, from the titles of our books." [7]

Although many authors adopt a “no smoke without fire” philosophy towards the existence of an historical Arthur, the fact is Dumville is quite correct; the historical evidence for Arthur is virtually non-existent, and what we do have is very much based on the 9th Century account of 'British History' [Historia Brittonum] compiled by the so-called Nennius. Many forests have been felled in providing the media for endless discussions of the battle list, described as a lost war poem, cited in Section 56 of 'Nennius' : 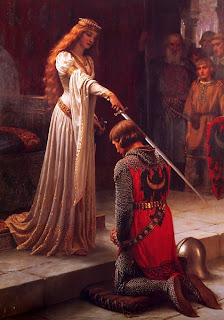 As Henry of Huntington stated in his Historia Anglorum "One historian [Nennius] tells of these battles, and the places where they were fought, though none of the places can be identified now. I think that this has happened by the providence of God, so that popular favour, adulatory praise, and transitory fame might be set at nought."

There are various manuscript versions of the Historia Brittonum but the version contained in the Harly collection, known as the Harlian 3859 manuscript is the only complete form, but omits the prologue. It is only one of two versions of the Historia Brittonum which contains Sections 67 through to 76, which includes the 'Wonders of Britain' (The Mirabila). This manuscript also contains an early version of 'Culhwch and Olwen' (or The Hunt for Twrch Trwyth). The Harlian 3859 manuscript is usually dated to the 11th Century - prior to Geoffrey of Monmouth's 12th Century pseudo-history. Significantly, out of twenty Marvels of the Island of Britain, The Mirabila twice refers to Arthur:

“There is another wonderful thing in the region which is called Buelt. There is in that place a heap of stones, and one stone superposed on the pile with the footprint of a dog on it. When he hunted the boar Troynt, Cabal, who was the dog of Arthur the soldier, impressed his footprint on the stone and Arthur afterwards collected a pile of stones under the stone, whereon was the footprint of his dog, and it is called Carn Cabal. And men come and carry the stone in their hands for the space of a day and a night, and on the morrow it is found upon its pile”.

“There is another marvel in the region which is called Ercing. There is to be found in that place a sepulchre by the well which is named Licat Amr, and the name of the man who is buried in the tumulus was called so, Amr. He was the son of Arthur the soldier, and he killed him in the same place and buried him. And men come to measure the tumulus, sometimes six feet in length, sometimes nine, sometimes twelve, sometimes fifteen. In what measure you should measure it in its turn, the second time you will not find it in the same measure, and I have tested it myself.”

His hound 'cafall' must have been gigantic as it is named after the Latin caballus = horse. This pile of stones is now called Corn Gafallt, in the north of Breconshire. Ercing as been identified as west of the Wye, 'Archenfield', Herefordshire and Gamber Head, 'the eye-spring of the Amir', in Llanwarne. We see here that Arthur is referred to as a warrior, not a king, and by the 9th Century had already become associated with folklore.

Appended to the Harlian 3859 manuscript version of the Historia Brittonum is the Annales Cambriae (The Annals of Wales), the earliest copy which has survived. The Annals, a simple list of events entered by year date, in chronicle form, makes two mentions of Arthur, considered by some scholars as authentic:

516 - The Battle of Badon, in which Arthur carried the Cross of our Lord Jesus Christ for three days and three nights on his shoulders and the Britons were the victors.

537 - The battle of Camlann, in which Arthur and Medraut fell: and there was plague in Britain and Ireland.

The entry for 516 sounds suspicously like it was taken from Section 56 of Nennius, compare with the “The eighth battle was at the fortress of Guinnion, in which Arthur carried the image of holy Mary ever virgin on his shoulders”. Dated to the 10th Century, The Annals of Wales make the first reference to the battle of Camlann, from which a mass of legendary material has developed in Cornwall and Wales, although Arthurian authors have offered sites across the country, from Hadrian’s Wall in the North to Hampshire in the South. It is also the first mention of Medraut who in later tradition became known as Mordred (or Modred) best known today as Arthur's illegitimate son by his half-sister Morgause. The first detailed account of Mordred is found in Geoffrey of Monmouth’s Historia Regum Britanniae (History of the Kings of Britain) in which he further developed the traitor role who brought about the downfall of Arthur.

Significantly, no reference to Arthur, King or warrior, appears in two key texts; Gildas, a 6th-Century British cleric writing around 540AD delivered a sermon called De Excidio et Conquestu Britanniae (On the Ruin and Conquest of Britain) from the period of Arthur's flourit, nor Bede's 8th Century Ecclesiastical History of the English Nation. After Nennius, oustide of early Welsh poetry, "Arthur" does not appear again in an “historical” work until Geoffrey of Monmouth wrote his History of the Kings of Britain in the 12th Century. Notably, Gildas and Bede, along with Nennius and even Geoffrey of Monmouth all credit Ambrosius as the British dark age resistance leader. As the Harlian Manuscript 3859 twice mentions Arthur as the victor at Badon in accordance with Gildas, our only contemporary historical source, we should equate Ambrosius as the Dux Bellorum – the Historical Arthur.

Posted by Edward Watson at 10:52 No comments: