After being disappointed at Tintagel Castle I wandered  down Tintagel high street into King Arthur's Great Hall of Chivalry thinking it was an Arthurian bookshop. Books it did have and plenty of them but nothing particularly rare or difficult to find elsewhere. A doorway off the shop leads into a long corridor adjoining a massive hall, an Arthurian work of art, a shrine to the King, funded and created by people who evidently loved the legend.

The Hall was formerly known as Trevena House, after the name of the village before it changed to Tintagel after the castle on the nearby peninsula, until it was purchased by Frederick Thomas Glasscock in 1928. The house was originally built on the site of the former Town Hall and Market Hall in Fore Street by J D Cook, born at Camelford and one time editor of the 'Morning Chronicle' and founder of the popular 'Saturday Review'. He visited Tintagel rich with its Arthurian memories and bold headland and ruined walls every summer during the 1860s and befriended the Vicar and Honorary Constable of the Castle, the Reverend Kinsman, who had taken a great interest in the island making it safer and more accessible to visitors, constructing a new path to the headland. It was largely due to Kinsman's interest that the island became a tourist attraction in the Victorian period. Cook died in 1868 and was buried under an immense white monument in the churchyard on the hill above Tintagel, as near the edge of the cliff as possible.

Glasscock was a wealthy business man who spent a small fortune adapting the Hall as a worthy monument to King Arthur and the Knights of the Round Table in the spirit of true romance. And it is a fitting monument indeed. It is said Glasscock employed local and Cornish workmen for the construction as far as possible, because of their love for the great King who once ruled over their land.

It became the headquarters for Glasscock's Order called the Fellowship of the Round Table which he founded in 1927 where brother knights were initiated into a chivalric system of medieval romanticism. The Fellowship was so successful that Glasscock had to increase the size of the Hall which opened in 1933 pretty much as we see it today.

It is claimed that over 50 types of Cornish stone were used in the Hall's construction, including slate, granite, greenstone, tourmaline, onyx, elvan and serpentine, brought here from places such as Rough Tor and Castle-an-Dinas on Bodmin Moor and others from the nearer Tintagel Castle.

Everything in the Hall is based on Arthurian Romance. There are 125 shields of granite, set along the full length of the Hall, said to represent the passage from darkness into light. The banners of the Knights are hung around the Hall

There are thrones carved of solid oak carved with the emblems of insignia of King Arthur and his Queen Guenevere. Granite is also used in the huge six ton canopy over the throne, supported by nine massive granite pillars. There is also a granite Round Table, along with two wooden ones.

Ten paintings by William Hatherell R.I. on the walls depict the principal events in the story of King Arthur. It is suspected that Hatherell died in 1928 before he completed his Arthurian commission for Glasscock.  Hatherell depicted scenes from Malory's Morte D'Arthur such as the choosing of Arthur to be King; the gift to him of the great Sword Excalibur; the presentation of the Round Table; the achievement of the Sangreal; and of course, the passing of King Arthur.

Veronica Whall, the daughter of Christopher Whall leader of the Arts and Crafts Movement 1880-1910, designed the 73 stained-glass windows in the Hall considered to be the largest collection of stained glass panels of King Arthur made in the 20th century. The large windows either end of the hall are reminiscent of the Pre –Raphaelite era and worthy of a great cathedral, referred to as the best post Pre – Raphaelite windows anywhere.

‘The Windows of the Knights’ show each Knight of the Round Table illustrated by his unique shield at each window where the Knight’s story is also told in words. The Hall has eighteen windows known as the 'Windows of Virtue', which portray the principal virtues which the Knights of the Round Table agreed to observe. The virtues are graded in quality, starting with the less spiritual ones such as Strength, Perseverance and Obedience, through to the more spiritual such as Purity, Faith and Love. 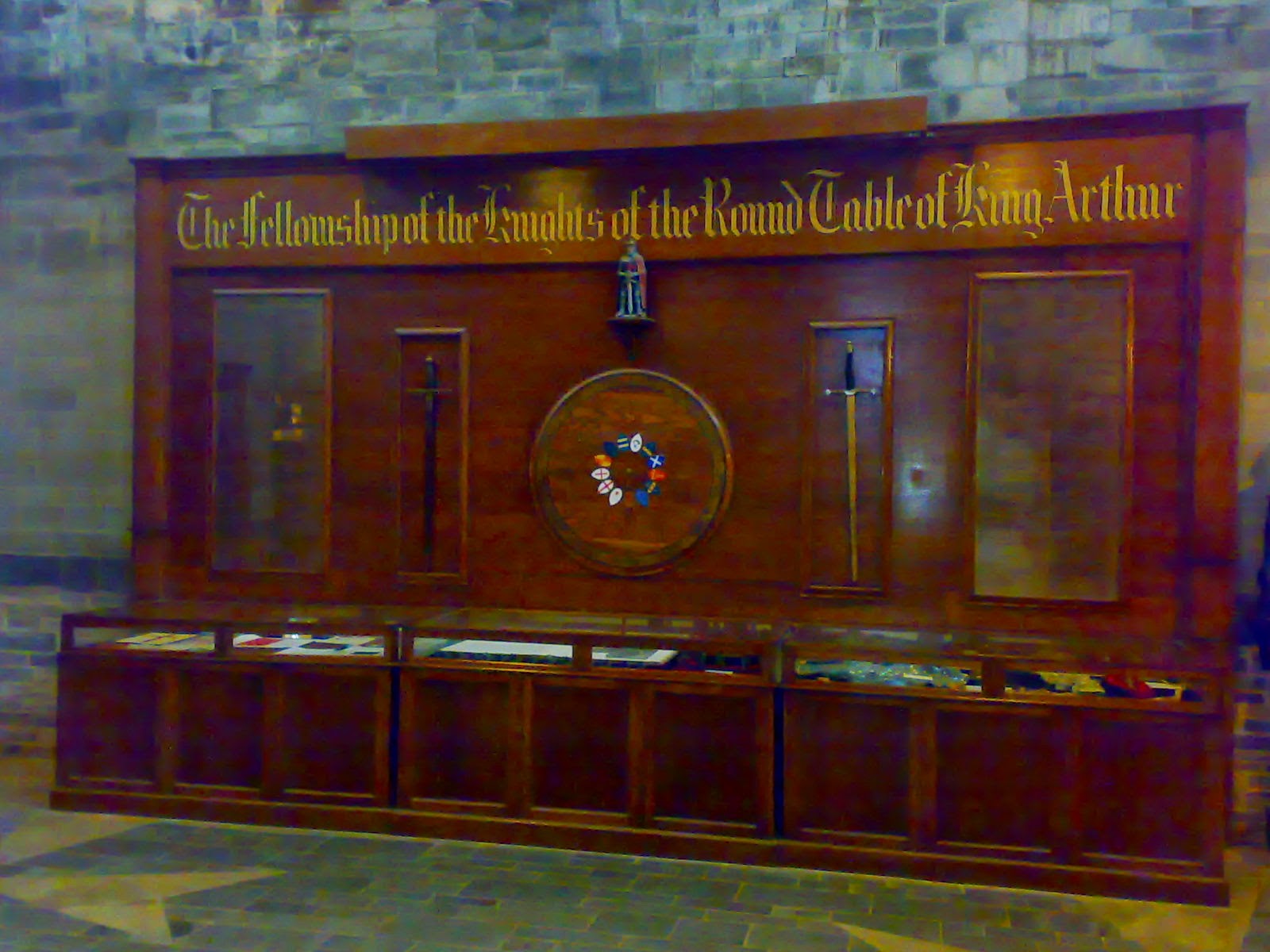 However, there appears to have been some discord between Glasscock and Whall when he apparently refused to pay the agreed price. This ended up in a court case, the strain of which affected the artist's health.

Glasscock extended his Fellowship to America but he died in 1934 on board the Queen Mary on a voyage to further promote his organisation. Glasscock had been a Freemason and bequeathed the Hall to his local lodge who still use it for meetings.

Stumbling upon this impressive Great Hall by accident made the visit to Tintagel worth it.

Posted by Edward Watson at 18:15 No comments: