Plotting Camlan: Letters from the Dead


The earliest extant and only historical record of Camlan is found in the 10th century Cambro-Latin chronicle, the Welsh Annals (Annales Cambriae):

Gueith camlann in qua Arthur et Medrawd corruerunt.
(The strife of Camlann in which Arthur and Medraut fell).

The Welsh Annals tell us that Arthur and Medrawd (Medraut) fell at Camlan. This battle has been dated to 537 AD by scholars, 21 years after the battle of Badon. The siege of Badon hill is recorded by both Gildas and Bede and accepted as a historical event. However, neither of these early scribes name the leader of the British as Arthur, in fact Gildas fails to name the leader at all.

The Badon entry in the Welsh Annals, although supported by external sources, looks suspiciously like the text of Arthur's eighth battle at Guinnion in the Historia Brittonum [see: Arthur, Badon and the Cross]. This does not mean the battle was not a real event but it raises questions over its attachment to Arthur. One might expect an original chronicle entry to have simply read; “516 – The Siege of Badon Hill”.

Such is the Camlan entry as presented in the Welsh Annals as a simple record of an event without connection to legendary feats. Yet Camlan is not recorded in any other external source that can be considered historical, subsequently it is viewed with suspicion by historians.

The fact that the Welsh Annals use the Welsh word "Gueith" (battle, or strife) for Camlan suggests a native Welsh source. The use of the word “Gueith” is not unique to the Camlan entry, many others conflicts contained therein are recorded in Latin, such as “Bellum Badonis”. Camlann is typically depicted as a futile battle among factions of the Britons (continuing internal wars are mentioned by Gildas after the victory at Badon) and has been interpreted as a battle fought by rival Welsh kingdoms, such as Gwynedd versus Powys. For this reason Medrawd is often identified as Maelgwn who was dominant in Wales in the days after Arthur's fall.

When did Medrawd become the bad guy? There is nothing in the entry in the Welsh Annals to suggest he was responsible for the demise of Arthur. In fact, the Camlan entry makes no connection between either men or their relationship; are they fighting on the same side or adversaries?

Mordred the Traitor
It wasn't until the 12th century when Medrawd became Arthur's nemesis at Camlan in Geoffrey of Monmouth’s History of the Kings of Britain (Historia Regum Britanniae), c.1136.

According to Geoffrey, while Arthur is on campaign in Europe, Mordred (as he names him) claims the throne and abducts Gwenhwyfar. The final battle is fought in Cornwall, near the river Kamblan (probably the Camel) (Padel, 1984:13). From that point on Mordred became synonymous with treachery and the man who brought down the king. The theme continued throughout the later Arthurian Romances with Mordred seemingly the result of an incestuous liaison.


It is likely that Geoffrey confused two characters here, as Mordred is a Cornish name and does not readily translate into the Welsh as Medrawd (Padel, 1984:15-17). Was there an old tradition of a bad prince Mordred in Cornwall?

There is a possibility that Geoffrey may have substituted a Cornish name for Melwas, (Padel, 2000:114) the abductor of Gwenhwyfar from the episode included in Caradoc of Llancarvan's “The Life of Gildas”. Two later poems recall variations of the tale from a lost Welsh original; "The Dialogue of Melwas and Gwenhyfer” and “The Dialogue of Arthur and Gwenhyfar”. The abduction story was in circulation in the early 12th century, well before Geoffrey wrote his account in his Historia. [see: The Modena Archivolt]

Who was this Medrawd?
In the late 11th century tale of ‘How Culhwch won Olwen’, Culhwch invokes over 200 members of Arthur’s court as guarantors of the gift he is demanding of Arthur; the hand of Olwen daughter of Ysbaddaden Bencawr. Yet Medrawd is not mentioned among them and is surprisingly absent from early Welsh Arthurian poetry.

Medrawd appears in three of the Triads of the Island of Britain, but none can be safely considered free from the influence of Geoffrey of Monmouth (Bromwich; 2017:140-41).

The Triads of the Island of Britain (Trioedd Ynys Prydein), contain Welsh traditions in groups of threes, have come down to us in several medieval Welsh manuscripts. The earliest are found in Peniarth 16, dating to the last quarter of the 13th century. Later collections are found in the White Book of Rhydderch and the Red Book of Hergest, dating to the early and late 14th century respectively. Although not written down until relatively late, some of the early Triads record events from the 6th or 7th centuries, Rachel Bromwich argues, that in their current form, none is older than the 9th century.

‘Three Men of Shame’ (TYP 51), draws from Geoffrey’s accounts of the invasion of the Romans, the Saxons and downfall of Arthur to the treachery of Mordred at Camlan. Bromwich notes that the wording of this Triad closely follows the Brut (the Welsh versions of Geoffrey’s Historia).

‘Three Violent Ravagings’ (TYP 54) records how Medrawd went to Arthur’s court at Celliwig in Cornwall, leaving neither food or drink in the court that he did not consume. Medrawd then dragged Gwenhwyfar from her royal chair and struck a blow upon her.

If we dismiss Triad 51 as directly following Geoffrey of Monmouth’s version of the fall of Arthur we may be able to detect traces of a Welsh tradition in Triad 54 where Medrawd has violated Arthur’s hospitality at Celliwig. But in Triad 59 we cannot even be certain that Arthur and Medrawd are on opposing sides.

The Triads contain further information on the cause of the strife of Camlan that we will come to later.

Rhonabwy’s Dream
In the 13th century Dream of Rhonabwy, included in the Mabinogion, Iddawc Cordd Prydain, the Agitator of Britain, tells Rhonabwy that he was one of the messengers between Arthur and Medrawd, his nephew, at the battle of Camlan and kindled strife between them because he was young and eager for battle. When he was sent by Arthur to seek for peace with Medrawd, charged with the fairest sayings he could think of, yet Iddawc would say to Medrawd the most offensive words he could. And that, he said, is how the battle of Camlan was contrived.

The story describes in detail how Arthur’s forces are assembling at a ford by the river Severn for the Battle of Badon, but Arthur himself is more interested in playing a game of gwyddbwyll with Owain mab Urien (son of Urien Rheged). While they play the board game Arthur’s men and Owain’s ravens begin to squabble and fight until Arthur crushes the  gwyddbwyll pieces. As with the Triads, it is certainly likely that the author of Rhonabwy's Dream was influenced by Geoffrey.

There were two British princes of this name in the 6th century; Medrawd ap Llew ap Cynfarch and Medrawd ap Cawrdaf, ap Caradog Freichfras. The former was the nephew of Urien of Rheged, who died around 580 and would have lived too late to have fought at Camlan, assuming that we accept the date of the battle in the Welsh Annals, 537. Here Geoffrey has his Mordred as the brother of Gawain, both sons of King Lot of Orkney and Anna (Arthur’s sister).

Whereas Caradog Freichfras (Caradoc Strongarm) is a semi-legendary ancestor to the kings of Gwent, South Wales, Cawrdaf is associated with North Wales. In the Triads Cawrdaf is listed as one of the ‘Three Chief Officers of the Island of Britain’ (TYP 13). Cawrdaf’s son is the more likely candidate to be the Medrawd of Welsh tradition.

In a late manuscript known as Bonedd y Saint (Descent of the Saints), which records the genealogical tracts of the early British Saints, Cawrdaf is listed as the father of Medrawd, in turn the father of Dyfnog (§.51), a 6th century saint. 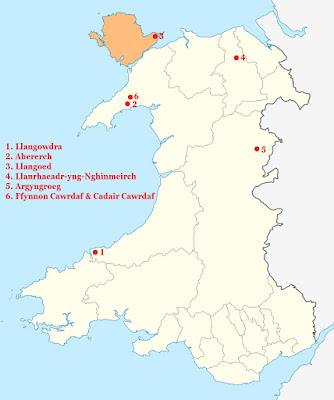 Cawrdaf is described, in some sources, as the saint who founded churches at Llangowdra (Ceredigion), Abererch (Llyn) and Llangoed (Anglesey). Not far from the church at Abererch can be found the Saint’s well Ffynnon Cawrdaf and a rock shaped like a seat known as Cadair Cawrdaf.

The parish Church at Llanrhaeadr-yng-Nghinmeirch, Denbighshire, in the Vale of Cwyd in North Wales, famous for its medieval stained glass 'Jesse Window', is dedicated to St Dyfnog, Medrawd’s son according to Bonedd y Saint.  A spring on the hillside is known as St Dyfnog’s Well where tradition claims he did penance by standing under the waterfall in a shirt, belted with an iron chain.

Another genealogical tract lists Cawrdaf as the father of Iddawc, Agitator of Britain (§.88), the man who caused Camlan, the self-confessed traitor in Rhonabwy's Dream. Although we should be cautious in holding a high degree of confidence in these late genealogical listings, this does raise the intriguing proposition that Iddawc was the brother of Medrawd.

As we have seen, Iddawc, Agitator of Britain first appears in Rhonabwy's Dream on the plain of Argyngroeg, near Welshpool in Montgomeryshire (Powys), not so distant from Cawrdaf sites in North Wales.

Fallen Hero?
In the native Welsh tradition, Medrawd is remembered as the warrior who fell fighting with Arthur at the battle of Camlan and to the Gogynfeirdd as a man of great valour and courtesy. Evidently the true story of Medrawd has been lost and replaced with Geoffrey of Monmouth’s treacherous usurper Mordred.

It seems Geoffrey confused the Medrawd of Welsh tradition with a Cornish Mordred that he writes of in the Historia Regum Britanniae. Oliver Padel stresses that the name Mordred existed in Cornwall and Brittany in the 9th and 10th centuries, a fact which underlines Geoffrey’s sources (Padel, 2000: 15-16).

We have failed to positively identify a site with Medrawd, the man who fell at Camlan, but we find his immediate family, father Cawrdaf and son Dyfnog, both associated with locations in North Wales.


Next: The Lost Story of Camlan