In the early 12th century the English historian William of Malmesbury was commissioned by abbot Henry of Blois to write the history of Glastonbury Abbey emphasising its early Christian past. William’s work De Antiquitate Glastonie Ecclesie (On the Antiquity of the Church of Glaston, c.1129) claimed that Irish saints Benignus, Brigit, Columba and Indractus the martyr had visited St Patrick’s resting place at Glastonbury.

Clearly impressed with this Irish connection at Glastonbury, William mentions in his prologue to the De Antiquitate that he wrote Vitae (Lives) of Saints Patrick, Benignus and Indractus, in addition to two lives of St. Dunstan. In his Vita Dunstani (Life of St Dunstan) William reaffirmed the tradition of Patrick at Glastonbury, although in his earlier Gesta pontificum Anglorum (Deeds of the English Bishops) he appeared somewhat sceptical about Glastonbury’s claims to hold the remains of Ireland’s patron. Afterall, Glastonbury has claimed to possess a remarkable collection of relics, not least the legendary King Arthur and his Queen Guinevere.

The earliest reference to Irish pilgrims at Glastonbury is found in the Life of St Dunstan by the anonymous author known simply as “B” (995- 1005) which states that Irish peregrini flocked to Glastonbury because St Patrick is said to lie at the Abbey.

There certainly seems to have been an Irish community at Glastonbury, with many Irish saints appearing in the Abbey calendars before the 11th century, as attested by a letter dated to before 690, by Aldhelm, Bishop of Sherborne (d.709), in which he rebukes Heahfrith, possibly one of his pupils, for succumbing to Irish learning. Irish saints such as Brigit, Patrick and Indract were known to have been venerated at Glastonbury.

The Glastonbury Charter of St Patrick provides the names of twelve hermits said to have been inhabiting Glastonbury when Patrick arrived. The names have been compared to the names on the largest of the two ancient pyramids in the old cemetery as described by William of Malmesbury. The Charter has long been recognised as a forgery produced by the monks of Glastonbury in the late 13th century which puts much doubt on the authenticity of the names on the pyramids, 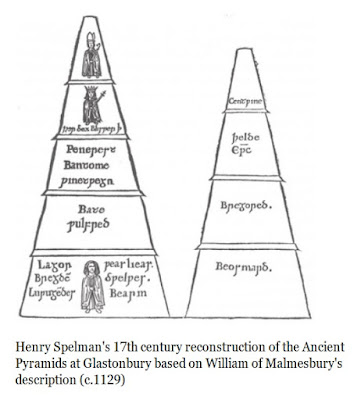 However, whether pilgrims first journeyed to Glastonbury because of the claims that St Patrick rests there, or whether the legends were a product of the Irish presence at Glastonbury remains to be answered. And yet the possibility that Patrick was indeed native to Somerset before he was abducted by Irish pirates adds further intrigue to the association with the Holy Men of the Emerald Isle.

St Benignus appears in the Glastonbury calendars from the 10th century but the association appears to be based on a confusion of identities (as is usually the case at Glastonbury). William of Malmesbury tells us that St. Benignus was born in Ireland and converted to Christianity by St. Patrick. Benignus became a disciple of St. Patrick and three years after Patrick founded the abbey at Druimlias he was appointed abbot. There Benignus remained for 20 years before becoming Bishop of Armagh. Benignus died around 468.

Yet in William's De Antiquitate Glastoniae he writes that Benignus did not die in Armagh but resigned his bishopric and left for Somerset around 460, where he lived as a hermit at Meare, barely three miles from Glastonbury. It seems the Irish community associated this man, known as Beonna, with St Benignus who had followed St Patrick to Glastonbury. In the late 11th century Beonna's relics were translated to the church at Glastonbury.

Miracles soon occurred, a sign the Saint approved of the translation, at a point midway between Meare and the Abbey where a church was built dedicated to the Saint. The relics of St Benignus (or Beonna) were moved to a shrine before the High Altar of St Marys Church at the Abbey, close to those of fellow Irish saints St Patrick and St Indract.

When William visited Glastonbury in the 1120’s, in addition a cult of St Benignus, he found the existence of cult to St Indract. William wrote a Vita Indractus but this is sadly now lost, consequently most of the information we have on St Indract comes from a Latin passio said to be based on an earlier Life written in Old English and from John of Glastonbury’s 14th century account said to be based on William’s original.

John of Glastonbury tells us that Indract was martyred during the reign of King Ine, 688-726. John writes that Indract was the son of an Irish king who journeyed on pilgrimage to Rome. On his return he pledged to visit Glastonbury to venerate the relics of St Patrick. Following a few days at Glastonbury Indract and his seven companions set off for Ireland breaking their journey at Shapwick for the night.

Some of King Ine’s men were staying nearby, including a band of wicked men led by a thegn named Huna. Thinking Indract and his companions were wealthy and carrying large amounts of money they attacked them as they slept and mutilated their bodies.

Meanwhile, when looking out over the Somerset countryside the King saw a pillar of bright light in the distance. After witnessing the same event for the next two nights he decided to investigate. On arriving at the spot he found the mutilated bodies of Indract and his companions, and Huna and his band of men who had gone mad were devouring their own flesh. King Ine brought the bodies of Indract and his companions to Glastonbury where he enshrined Indract at the north side of the High Altar at St Mary’s Church, opposite St Patrick, with his followers placed under the floor of the basilica. The body of one companion is said to have not been found, but on their feast day, 8th May, a column of light is said to emanate from his place of burial.

According to John of Glastonbury when St Hilda’s relics were gifted to Glastonbury Abbey by King Edmund the Elder they were kept in a reliquary with those of St Indract.

There is evidence suggesting that St Indract was venerated at Glastonbury at least by the early 11th-century. However, his cult, although known in Ireland, seems to have been local to Glastonbury. According to William of Malmesbury, St Indract’s martyrdom was around 710, but Irish accounts assert a date of around 854.

As with Saints Patrick and Benignus, and so many others, there again seems to be confusion with the identity of the individual claimed to rest at Glastonbury.

Michael Lapidge has argued that he is most likely to represent a 9th-century abbot of Iona named Indrechtach ua Fínnachta whom several contemporary Irish sources report as being "martyred among the English" in 854. These sources give the date of his death as 12th March, which differs from the Glastonbury tradition of 8th May.