In later years he returned to his first love of writing fiction, and in late 2012 and early 2013 self-published a trilogy of novels: The Forgotten Stars; Secret Songs; and The Hand of Fire.

I first stumbled across Stone’s work some thirty years ago as a regular contributor of articles for Bob Trubshaw’s earth mysteries magazines Mercian Mysteries and At the Edge, including such gems as: The Nine Sisters and the Axis Mundi; Penda the Pagan - Royal sacrifice and a Mercian king; The Cosmic Mill; Hellhounds, Werewolves and the Germanic Underworld.

Prior to the books mentioned above, he continued his association with Bob Trubshaw and produced several booklets for Heart of Albion Press back in the early 1990’s. Sadly these works are currently out of print with second hand copies sometimes attracting extortionate prices. 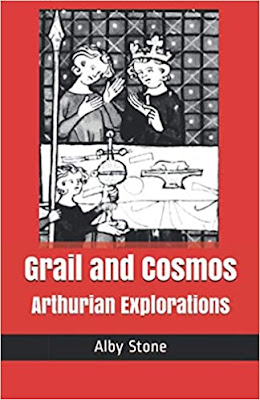 I was therefore pleasantly surprised to find that three of these booklets with interrelated themes have been assembled together with an article from the now defunct periodical of the Pendragon Society as Grail and Cosmos: Arthurian Explorations (Independently published 2020, 162 pages), the common theme being King Arthur and the Grail:

In the introduction to A Splendid Pillar, Stone writes:

“The pre-Christian mythology of Celtic Britain has exerted a significant and widely acknowledged influence on the form and content of the medieval Arthurian romances……. The best example of this phenomenon is the Holy Grail itself, which can be traced back to the divine or magical vessels of Celtic myth: the cauldron in Branwen daughter of Llyr, which could resurrect the dead; the drinking horn of Gran Galed; ‘whatever drink might be wished for was in it’; the cauldron of Dyrnwch Gawr, which would not boil meat for a coward; the golden cup borne by the goddess who personifies Sovereignty in Irish tradition; the capacious cauldron of the Dagda; and so on.

“Yet, less than three decades after the Grail made its firs appearance in literature …… it had become transformed into a potent and inspirational symbol of Christianity, identified with the cup used by Joseph of Arimathea to collect the blood of Christ at the Crucifixion, associated with the Eucharist, and imagined as a touchstone of Christian faith and virtue.

“Even so, the Grail has retained all its heathen properties, more or less intact….”

This very much sets the tone for Grail and Cosmos. The Splendid Pillar is of course the axis mundi, a predominant of most traditional cosmological systems Stone tells us; conceptualised as the central point of the earth’s surface where the sky meets the underworld, the point to gain admittance to the Otherworlds; the realms of the gods or the spirits of the dead. Stone argues that in the Grail romances images of the axis mundi occur in two contexts; the Grail Castle and in adventures experienced on the way to the castle.

The Second Continuation of Chretien de Troyes' Perceval, for example, tells us that when trying to find the Grail Castle for the second time, Perceval arrives at the summit of Mount Delerous and sees a great pillar surrounded by fifteen crosses, He meets a girl here, the daughter of Merlin, who directs him on the correct path. Stone takes us through variant pillars in the tales of the Grail before concluding that this provides clear evidence that stories and characters of the pagan Celts has penetrated the medieval Grail romances.

Yet, although these depictions are not directly relevant to the story, Stone asserts that they are introduced to guide or lead the quester to the Grail Castle, essentially providing information useful to the quest as in representations of the cosmic axis that facilitate travel to the Otherworld.

When the Grail is paraded through the hall of the Fisher King it is accompanied by various objects; tables, knives and platters, a candelabra, and a strange white lance that drips blood from its tip. In introducing the enigmatic weapon to the Grail romances Chretien described this as simply ‘The Bleeding Lance’.

Stone sees the origins of the lance as strictly pagan although the Continuators’ of Chretien’s unfinished tale associated it with Christian imagery as the lance of Longinus, the weapon that pierced Christ’s side as he hung on the cross. The Celtic scholar RS Loomis is quoted by Stone as saying this was ‘natural but absurd’ and proposed alternatively that it was actually the spear of the Irish divinity Lugh. Loomis based his argument on the fact that the knight’s visit to the Grail castle strongly resembles Conn’s visit to Lugh’s palace in The Phantom’s Frenzy (Baile in Scail). Loomis supports his theory with reference to two other Irish texts that mention a fiery spear belonging to Lugh that is immersed in a cauldron of blood to keep it sedated and prevent it harming those who came near it.

After taking us through several comparisons, Stone reminds us of a tale of King Arthur in the 13th century Perlesvaus, or Le Haut Livre du Graal (The High History of the Grail), in which he is attacked by the Black Knight with a flaming lance that can only be quenched by the king’s blood. Arthur kills the Black Knight and his corpse is dismembered then carried away piece by piece.

The Questing Beast is an obscure creature, smaller than a fox, whiter than fresh fallen snow. Perceval witnesses a bizarre event when he comes to a clearing in the Lonely Forest with a red cross at the centre, where there is a white-clad knight holding a golden vessel at one end while opposite is a maiden also clad in white garments and bearing a gold vessel.

The snow-white beast runs into the clearing terrified by a ‘litter of twelve in her belly yelping like a pack of dogs’. She goes to the white-clad knight then the maiden before turning to Perceval who is warned by the knight not to interfere with the beast’s destiny. The beast goes to the red cross and gives birth to twelve dogs which then immediately start to tear her apart. They leave the clearing and the white knight and white maiden gather up the flesh and blood of the beast in their gold vessels, then worship the red cross before leaving.

The other episode of dismemberment in Perlesvaus is the Black Night that we met above. Stone only sees two items in common with the two events: they both feature dismemberment in a forest clearing, followed by removal of the victims remains. However, the Black Knight episode and the fiery lance appear to be from older Celtic tradition.

Stone sees the presence of the white-clad knight as representative of the Irish god Lugh and the maiden in white as a goddess representing the Sovereignty of Ireland as they are depicted in the tale of The Phantom’s Frenzy, while the Black Knight’s lance suggests he also may be a manifestation of Lugh himself. From here Stone goes into some detail about sacrifice and Indo-European cosmogonic myth.

Finally, we come to the curious episode of A Head on a Platter as told in the 13th century Welsh romance known as Peredur, an offshoot from Chretien’s original Story of the Grail. In Chretien’s unfinished tale he describes the Grail, the centre piece of a ritualistic ceremony, as simply ‘a graal’, a common Old French word for a wide serving dish. In Peredur, which does not mention the Grail by name, it is a large platter (dysgl), in a shorter procession sequence, carrying a man’s head swimming in blood.

Stone sees the bloody platter of Peredur in context with the lance that drips blood from its tip in the Grail procession. He argues that the lance is descended from the fiery spears of Irish myth that must be quenched in cauldrons of blood. These magical weapons are associated with lightning and made from fire. In turn he sees King Arthur’s sword that we know as Excalibur through the Romances as derived from Irish ‘caladboig’ (lightning sword) with its roots firmly based in Indo-European tradition.

This short book (150 pages) is essential reading for anyone interested in the sources of the Grail stories.

Posted by Edward Watson at 22:34 No comments:

Brighid’s return from the Otherworld

Today 1st February is Lá Fhéile Bríde, Brighid’s Day. It is of course also the traditional Gaelic festival of Imbolc or Imbolg, marking the halfway point between the winter solstice and the spring equinox, and the first day of spring.

The festival was Christianised and adapted as the feast of St Brigid yet many rituals still associated with the Saint’s Day clearly betray their pagan Celtic origins.

Brighid is said to return from the Otherworld on 31st January, the eve of Brighid’s Day; after sunset she will emerge to walk the land bestowing protection, fertility and health on people and animals. But it is not only Brighid who returns after dark.

It is also the night the Good People will emerge from the hills as the veil between the two worlds is breached. In some areas of Ireland a sheaf of corn or an oat cake were left outside on Brighid’s Eve to thank the Good People for the harvest and to ensure forthcoming good luck.

On the dawn of Imbolc light from the rising sun enters several Neolithic mounds (passage tombs) including the Mound of the Hostages at Tara and strikes a slab at the back if the tomb as if opening a doorway to the world of the ancestors.

Brighid is said to be the only saint to return annually and her appearance on the eve of the fire festival, Imbolc, is testament to her roots going back to the ancient Celtic goddess.

There are many folk traditions associated with her return on Brighid’s Eve in Ireland, one well known custom is the Brideog procession in which a straw doll is paraded from house to house.

Another tradition is that a piece of cloth, known as the Brát Bhride (Brigid’s cloak), that is put outside at sunset on 31st January. The Brát Bhride which consisted of a ribbon, a garment, or a piece of linen, was typically placed on a nearby bush, or a window sill or tied to the handle of the front door. The colour of the Brát Bhride varied on the area, often it was a piece of red ribbon tied outside the door.

The brát is left over night and at sunrise, damp with the dew, is said to have been touched by Brighid during the night who would bestow it with healing properties which remained in the cloth, becoming more powerful over time.  The brat must be lifted before sunrise and in some areas washing it was forbidden. The brát would be laid on people to heal various ailments, curing infertility in women and easing childbirth. It is also said that wearing the brát would prevent young children from being carried off by the Good People.

This tradition of a cloth being bestowed by the Goddess as she sweeps the land on her annual return from the Otherworld on the eve of her festival day may have a basis in the claim that it was Brighid who wove the first cloth in Ireland and worked into it white healing threads which were said to have kept their healing power for centuries.