The Retreat from Bourges
"Arthur Riothamus, and what was left of his battle-weary troops, made their escape from Bourges (Avaricum), after their defeat by the invading Visigoths. They went east towards the Burgundians who were known to be allied to the Romans. There were still Roman strongholds in Avallon and Autun. The Romans had promised him reinforcements, but they had never materialised in Bourges, and Arthur Riothamus had been left to fight the Visigoths with his army alone, with disastrous consequences. The Burgundians would have offered him a safe haven. Along the Roman road to Avallon he would have passed through some of the most beautiful landscape in France. He would have reached the ‘Avallonnais’ region, surrounding Avallon itself, and the famous and sacred phenomenon for which Avallon was known throughout Gaul at that time, Les Fontaines Salées – literally, ‘the salt springs’. " [1] 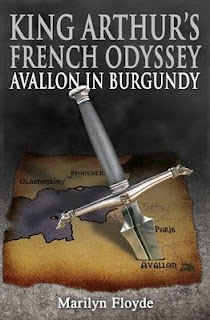 The theory of King Arthur as Riothamus who met his demise in France is not a new one and has been championed in recent years by Geoffrey Ashe in The Discovery of King Arthur, (1985). Widely regarded as one of the leading Arthurian specialists, Ashe provides the foreword to Marilyn Floyde's new book, King Arthur's French Odyssey (published December 2009) endorsing the theory that the nearest we get to identifying an historical Arthur is Riothamus who was last seen heading towards the Burgundians in the direction of Avallon. Floyde, having lived in a small village near Avallon, Burgundy, France, for a number of years, has taken the theory a few steps further by investigating the Arthurian themes in the countryside around her French home.

Inspired by a question on the 'burgundytoday.com' message board asking ‘Avalon or Avallon', writer Marilyn Floyde set out to research the local area around her home in Burgundy. A strong case began to emerge that Arthur spent considerable time in Burgundy and was wounded in battle there. Despite the calls from Glastonbury in England, claiming Arthur as their own, Avallon in Burgundy now steps out of the shadows.

Floyde uses the two Geoffrey's, Ashe and Monmouth, as her main sources and provides a refreshing look at the Arthurian legend in a French context. It is Geoffrey of Monmouth's story that the author searches out the first clues and develops her Arthurian French Odyssey, combined with the use of ‘La Chanson de Girart de Roussillon' from a body of medieval French literature known as the Chanson de Geste (Old French for "songs of heroic deeds”), part of ‘The Matter of France’. The anonymous Chanson de Geste, is thought to be based on an ancient epic poem and recorded by a medieval monk either in Vézelay or Asquins some time between 1136 and 1180, around the same time Geoffrey of Monmouth penned his History of the Kings of Britain.

In exploring Arthur’s French connections, Floyde discusses the length of time he spent there, places he visited, wartime alliances, peacetime friendships, love affairs and his ultimate resting place. Floyde promotes a persuasive account containing all the typical components of a Dark Age tale full of fear, bloodshed and incest; a time for Arthur’s kinship with France to be acknowledged in the context of Geoffrey of Monmouth’s original story.

Not a heavy, scholarly work, but instead a very readable account which considers the real location of 'Avalon' as Glastonbury or the Burgundian town of 'Avallon', known as Aballo in the 12th Century. The story of Arthur's sword Excalibur (known as Caliburn in the earliest sources) and its connection with the forges of Avallon provides an adequate explanation for Geoffrey of Monmouth's account of the weapon's provenance. Floyde suggests that it is possible that from the earliest times in Gaul when the Roman Empire was in a state of terminal decay, Arthur's sword Caliburn was hidden, along with the body of Arthur, until King Richard the Lionheart set off on the Third Crusade. The last historical reference to Caliburn being when King Richard gave the magical sword to the King of Sicily while on his journey to the Holy Land.

Floyde considers the possibility of the King's bones being removed from the French town and taken to Glastonbury to be excavated later by the monks in the Abbey grounds c.1190. The transportation of Royal remains and martyr's relics was not an uncommon practice in medieval times. But perhaps the key factor in Floyde's argument for a French Avallon is the sacred waters of Les Fontaines Salées, in the ‘Avallonnais’ region of Burgundy, with its natural salt springs and mineral waters known as a healing sanctuary since prehistoric times, where she proposes the wounded King would have made for after being trounced in battle by the Visigoths.

After the first edition of King Arthur's French Odyssey - Avallon in Burgundy by Marilyn Floyde sold out, and no longer available, the book has been republished in 2016 with fresh findings.

Expanding Geoffrey Ashe's theory of Arthur as Riothamus, which he outlines in the Foreword, this new edition presents an extraordinary revelation and challenges Glastonbury's claim to be 'The Island of Avallon',

The book was commissioned by www.burgundytoday.com where the initial research was first published.


'Many tales are told and many legends have been invented about King Arthur and his mysterious ending. In their stupidity the British people maintain that he is still alive. Now that the truth is known......The fairy tales have been snuffed out, and the true and indubitable facts are made known, so that what really happened must be made crystal clear to all and separated from the myths that have accumulated on the subject.' [1]

Did King Arthur really exist? Does the Arthur that we read of in the ninth-century sources have any link to a real leader of the fifth or sixth century? Was Arthur a powerful king or a Dark Age general co-cordinating the British resistance to Saxon invaders? 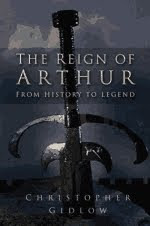 In an attempt to answer these perpetual questions The Reign of Arthur: From History to Legend by Christopher Gidlow (The History Press 2004) takes a fresh look at the early sources describing Arthur's career and compares them to the reality of Britain in the fifth and sixth centuries. Gidlow presents, for the first time, both the most up to date scholarship with a convincing case for the existence of a real sixth-century British general called Arthur.

Gidlow carefully examines the source-material for Arthur as far as Geoffrey of Monmouth's "History of the Kings of Britain", and presents a lucid and compelling case for Arthur's historical existence, whilst acknowledging the progressive accretion of folkloric and legendary material around that name.

Detailed analysis of the key Arthurian sources, contemporary testimony and archaeology reveals the reality of fragmented British kingdoms uniting under a single military command to defeat the Saxons. There is plausible and convincing evidence for the existence of their war-leader, and, in this challenging and provocative work, Gidlow concludes that the Dark Age hypothesis of Arthur, War-leader of the Kings of the Britons, not only fits the facts, but it is the only way of making sense of them.

Contents
List of Illustrations
Acknowledgements
Introduction: Who was King Arthur?

Part One: From History
1. In the Reign of King Arthur...
2. Arthur Fought against Them in those Days
3. The Strife of Camlann
4. The Destruction of Britain
5. Tyrants and Kings
6. The King of the Britons 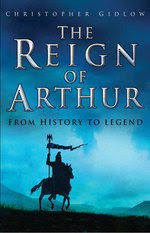 The first part of The Reign of Arthur, “From History”, examines the source material in chronological order, Gildas, Nennius, the Welsh Annals and such, in the light of the latest historical research the author comes up with several surprising and persuasive insights.

The second part of the book, "To Legend," discusses later, rather dubious, source material, from the Mabinogion to the Saints' Lives through to Geoffrey of Monmouth, including the magical deeds of the legendary Arthur, turning him into a figure first of folklore, then eventually of chivalric romance, adding to our understanding of how Arthur came to be viewed primarily as a figure out of legend.

Christopher Gidlow, an Oxford history graduate and honorary life member of the Oxford Arthurian Society, has his second Arthurian book Revealing King Arthur: Swords, Stones and Digging for Camelot due Publication on 1st May 2010 by The History Press.

Notes:
1. Gerald of Wales, Speculum Ecclesiae, 1216 - (translated by Richard White in King Arthur in Legend and History) From the Back cover: The Reign of Arthur: From History to Legend by Christopher Gidlow , The History Press 2004.