“There is another wonderful thing in the region which is called Buelt. There is in that place a heap of stones, and one stone superposed on the pile with the footprint of a dog on it. When he hunted the boar Troynt, Cabal, who was the dog of Arthur the soldier, impressed his footprint on the stone and Arthur afterwards collected a pile of stones under the stone, whereon was the footprint of his dog, and it is called Carn Cabal. And men come and carry the stone in their hands for the space of a day and a night, and on the morrow it is found upon its pile” [1]

The Marvels of the Island of Britain
The 11th century Harlian 3859 manuscript contains one of only two versions of the Historia Brittonum which contains the Marvels, or Wonders, of Britain, (the Mirabila), chapters 67 through to 76. Significantly, out of twenty Marvels of the Island of Britain, the Mirabila twice refers to Arthur; the paw print of his dog known as Carn Cabal (cited above), and the tomb of his son Amr.

The cataloguing and description of natural wonders was an old established literary activity with texts such as the Mirabilia used as devices to preserve antiquarian and traditional material. The Mirabilia contained within the Harlian manuscript lists twenty marvels. The first four, not in Wales, are numbered. The following Marvels, 5 – 14, are not numbered and simply introduced as such, “there is another wonder...” and so forth, and generally located in the south-east of Wales and along the English border. The final section concludes with four numbered marvels from Anglesey and two from Ireland. Evidently the author was selecting from different lists and had more interest in the Welsh marvels. Indeed he even claims to have visited the tomb of Amr. [2]

The significance of the Historia Brittonum as an Arthurian text is generally accepted but it is rarely recognised that it contains the earliest Arthurian references we have with a secure dating. Arguably there are earlier Arthurian references in early Welsh poetry but these are notoriously difficult to date with any certainty, whereas the dating of the Historia Brittonum to 829-30 AD is satisfactorily secure. [3]

It is notable then that even in this our earliest Arthurian text the legend is already in a two-fold state with the 'historical' Arthur, the 'dux bellorum' of the battle list of Chapter 56 on one hand and the 'folkloric' Arthur attached to landscape wonders of the Mirabilia on the other. The list of Arthur's battles contained therein is seen as the strongest argument for a historical figure, although positive identification of this sites has proved elusive, whereas the sites of the Arthurian Mirabilia, Carn Cabal and Amr's tomb in Ercing (Archenfield, Herefodshire), appear to have positive identifications. The Arthur of the Mirabilia is one of magic, supernatural animals and landscape marvels. [4] We have no real justification in giving either state precedence over the other and find neither helps in solving the perennial problem of whether the legend became attached to a historical personage or the legend became historicised. Throughout Historia Brittonum Arthur is referred to as a warrior or soldier, never as a king, and by the 9th Century had already become associated with folklore which must have been in oral circulation for sometime prior to that date.

Cabal
The first Arthurian mirabile is a clear reference to the hunting of the great boar Troynt. Curiously Arthur's dog is called by a name meaning 'horse', Cabal (Modern Welsh Cafall). This was considered by some to be an error,  [5] although, confusingly, 'carn' can mean 'cairn, tumulus' (feminine) or 'hoof' (masculine). [6] Yet significantly the name 'Cafall' appears as Arthur's hound during the episode of the boar hunt within Culwch and Olwen. Further, in the later Mabinogion tale Geraint Cafall appears as Arthur's favourite dog, and the only canine named, in the hunting of the white stag. Evidently, the hound 'Cafall' must have been gigantic, perhaps the size of a horse (Latin caballus = horse). It is worth noting here there are many landscape allusions to a gigantic Arthur.

The subject of this mirabile is the chase of the supernatural boar Troynt (Latinised as Troit) across Wales. Evidently, this is the same great boar, the Twrch Trwyth, whose hunt forms the climax to the later Welsh tale 'Culhwch and Olwen'. The inclusion of the reference to the boar hunt in the Mirabilia attests the core of the tale was in existence, with Arthur as its hero, in at least the early 9th century. [7]

Evidently Arthur's hunt for a supernatural boar is the subject of a popular stock narrative in medieval Welsh literature. The fullest account of this great hunt appears in the 10th century tale of Culhwch and Olwen. Both the boar and the hunt have parallels in earlier Welsh and Irish mythology where it is known as the Torc Triath. And, as with the Mirabilia, the Arthur of the Culhwch and Olwen is again one of magic and the supernatural. In Culhwch the  Twrch Trwyth is said to have originally have been a divine being in animal form, emphasising the mythical nature of the tale. [8] Culhwch must complete a series of impossible tasks (anoethau) before the giant Ysbaddaden will allow him to marry his daughter Olwen. One task is to retrieve the comb and scissors that are between the two ears of Twrch Trwyth, the son of Prince Tared. The boar has laid waste to one of the five provinces of Ireland before threatening to go to Arthur’s country and cause as much damage as possible. The boar fulfils its promise, slaughters men and livestock throughout south Wales with Arthur cast as protector of the nation from this supernatural monster.[9]

The Oldest Arthurian Tale
It is argued that the tale of the  Twrch Trwyth was already ancient by the 9th century. [10]
But how ancient?

It is often argued that the oldest Arthurian reference occurs only in the B text of the Y Gododdin from the Book of  Aneirin, in which the prowess of the warrior Gwawrddur, who although he killed 300 cannot compare to the mighty warrior Arthur. The heroic poem, traditionally ascribed to the bard Aneirin, recalls a massive defeat for the host army in which, save three, none returned. Contained within a long series of elegies are the names of the fallen warriors mourned by the kingdom of Gododdin.

We have already mentioned the difficulty of securely dating early Welsh poetry yet we find a further, often overlooked, Arthurian reference within the Book of  Aneirin amongst four poems, known as Gorchanau, attached to the Y Gododdin. Of these poems the opening lines of Gorchan Cynfelyn again refers to the Twrch Trwyth, the legendary boar of Culhwch and Olwen:

“Were I to praise,
Were I to sing,
The Gwarchan would cause high shoots to spring,
Stalks like the collar of Trych Trwyth,
Monstrously savage, bursting and thrusting through,
When he was attacked in the river.....”  [11]

The Gorchan of Cynfelyn mourns a warrior whose name does not appear in Y Gododdin. Cynfelyn is said to be the son of Tegfan, son of Cadfan, and Gwynedd is named as his land. Here, the prowess of the warrior is seemingly compared to the gigantic mythical boar as it resisted its hunters.

Manifestly a north Wales interpolation, this gorchan has been dated to the arrival of the Y Gododdin A text in Gwynedd, the early 7th century. The tale of the hunting of the Twrch Trwyth does appear to be ancient indeed and given that it is always Arthur who fights the boar throughout early Welsh traditional accounts this poem should be seen as possessing the potential to be the earliest Arthurian reference. [12] 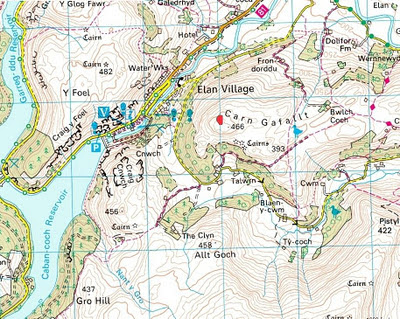 Carn Gafallt
Today the paw print of the hound Cafall is said to still exist in a rock on top of the mountain of Carn Gafallt in north Brecknockshire, Powys, between Rhaeadr and Builth Wells, some 1,500ft (466m) above the upper Wye, in the Elan Valley. Hence the rock was named 'carn cabal' now gives name to this whole hill as Carn Gafallt, after the carn alluded in the Historia Brittonum, as one of three prehistoric cairns on its southern brow above Talwrn at SN 943644. The placement of the cairns tends toward a linear alignment along the escarpment edge rather than the highest point of the hill which may have held specific importance. Four middle-bronze-age gold torcs were found on the hill under one of the lesser stone-piles which litter the area.

Fourteen miles west of Carn Gafallt lies a tract of moorland known as Rhos y Gaffalt, and perhaps the now lost Talken y Gayallt [13], at least a coincidence of names possibly betraying a lost, fuller account of the local lore.

Lady Charlotte Guest, translator of the Mabinogion collection of tales, which included Culhwch and Olwen, was aware of Carn Gafallt being mentioned in the Mirabilia of the Historia Brittonum. In the 1840s she dispatched a gentleman to the summit to see if he could find the rock with the paw print. An anonymous correspondent, supplies the following account of the expedition:

“Carn Cavall, or, as it is generally pronounced, Corn Cavall, is a lofty and rugged mountain, in the upper part of the district anciently called Buellt, now written Builth, in Breconshire. Scattered over this mountain are several cairns of various dimensions, some of which are of very considerable magnitude, being at least a hundred and fifty feet in circumference. On one of these carns may still be seen a stone, so nearly corresponding with the description in Nennius, as to furnish strong presumption that it is the identical object referred to. It is near two feet in length, and not quite a foot wide, and such as a man might, without any great exertion, carry away in his hands. On the one side is an oval indentation, rounded at the bottom, nearly four inches long by three wide, about two inches deep, and altogether presenting such an appearance as might, without any great strain of imagination, be thought to resemble the print of a dog’s foot . . .” [14]