Evidence for a pre-Nennian Arthur

The Historicity of the Arthurian Battle List - Part II

Whence the name Arthur?
In Part I of the Historicity of the Arthurian Battle List we explored the possible origins of the Arthurian battle list as contained within the 9th century History of the Britons (Historia Brittonum – aka 'Nennius') raising more questions than answers. However, although the History of the Britons is our first securely dated documentary evidence for Arthur, it is clear that the figure of Arthur was known well before the 9th century and was not invented by its author. So who was this Arthur who inspired the record of twelve successful battles against the Saxons, culminating in the Battle of Badon? In hope of finding any answer to this we need to examine evidence for Arthur prior to the 9th century.

Our first call is four figures who appear in the mid-6th and the early 7th centuries all named Arthur who are often cited as evidence for the existence of a historical Arthur, named in the memory of a great military leader.

All these occurrences of the name as recorded in Gaelic sources are connected to Irish settlers belonging to high-status Irish royal families who founded the kingdoms of Dyfed (Demetae) in south-west Wales, and Dalriada in southern Scotland:

• The first historically attested Irish Arthur is found in the family of Áedán mac Gabráin, king of the Scottish Dál Riata from 573-608 AD. Adomnán's Vita Columbae (The Life of Columba) records how Áedán's sons Arthur and Eochaid Finn died in battle against the Miati some time before 597. This is confirmed by the Annals of Tigernach.;

• Artuir ap Bicuir 'the Briton' of Strathclyde(?) who killed an Ulster chieftain. The Irish Annals record the death of Mongán mac Fíachnai of Dal Fiatach in Strathclyde in 625. This is the Mongán of legend of legend whose real father was said to be Mananna mac Lir, the Irish Sea god; it is claimed that Mongán was conceived while his father Fíachnae mac Báetáin, king of Dal Fiatach, was away helping Áedán mac Gabráin on his British campaigns when his wife Caíntigern slept with Manannán mac Lir to produce Mongán. Mongán often bears the patronymic mac Fiachna, despite his true paternity. The record of Mongán’s death in the Annals of Tigernach has him killed by a stone thrown by one Artuir ap Bicuir, described as a Briton.

• an Irish Artur, grandfather of Feradach, documented in 697;

• Arthur ap Pedr of Dyfed, grandson of Vortipor (“tyrant of the Demetae” as mentioned by Gildas). This Arthur is mentioned in the Harleian Genealogies and the Irish text The Expulsion of the Deisi. 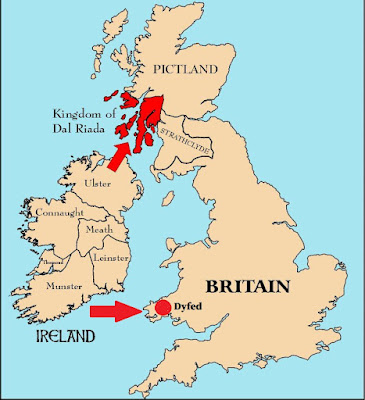 ‘Arthur’ was a very rare name both before and after this time and to have four appear in the genealogical record all within a generation or so of each other is a very unusual occurrence; notably, the name does not appear again in Welsh genealogies for several hundred years. All appear to have belonged to high-status Irish royal families with British connections. As the Arthur of the 9th century History of the Britons is clearly a British text with a British hero, not Irish, we require an explanation to how the fame of Arthur spread among the Irish as well as the Britons?11

These 6th-7th century Arthur’s are often presented in the argument for a historical Arthur that claims they must have all been named after a renowned British warrior probably from the generation previous.12 However, Ken Dark concludes:

"The account of Arthur in the Historia Brittonum can be seen as wholly fictional, representing our earliest glimpse of the Arthurian legend. But this legend may well have developed in the previous centuries from a genuinely historical figure, active either in the 'Irish' areas of Britain or in Ireland, in the sixth century. This figure, the ' Irish Arthur', as he might be termed, may have been a military hero among Irish elites with British connections in the later sixth and seventh centuries, and possibly also among the Britons. Perhaps we should look to Dyfed, even to Arthur son Pedr/Retheoir in particular, for this 'protypicaI Arthur'.”13

Contra Dark, Caitlin Green asserts that clearly none of these ‘Irish’ Arthurs can plausibly be considered as the ‘original’ Arthur of the History of the Britons;  in accepting that Green is correct then how then do we explain the appearance these four men in the historical record all within a few generations of each other?14

Significantly, from what we know of their biographies, none of them has any connection with the events of the 5th century war of the Saxon federates and the battle of Badon. Green, quoting the authority of Rachel Bromwich, argues that to find four men all named after the historical Arthur… ‘would be a type of commemoration for which Celtic tradition offers no parallel.’ Green asserts that the only plausible explanation is that these men were not being named in memory of some historical figure from a previous generation or so, but after a character already renown in legend and myth that these Irish families came into contact with during their interactions with the Britons.15

The name ‘Arthur’ was likely commended to these Irish chieftains as that of a ‘peerless warrior’, a military ‘superhero’ as found in battle poems such as Y Gododdin and Marwnad Cynddylan, during their contact with the Britons. Green reasons that this would provide an explanation for some people with Irish connections at this time having used the name regardless of any native British superstitions against its use as suggested by Oliver Padel.16

Padel argues that “the absence of this name from British contexts is due to Arthur being regarded ‘with exceptional awe’ as a legendary hero of folklore, whilst the Irish ‘when they came into contact with the folklore as a result of their settlements in western Britain, need not have felt such reverence or reluctance' ”17

A detailed study of the Welsh genealogical tracts by Peter Bartrum’s found that not one single person of British descent in Wales (rather than Irish, such as Arthur map Pedr) bore the name ‘Arthur’ in the genealogies until the late 16th century at the earliest. Bartrum is therefore in agreement with Padel that the name may have been avoided by the Britons as it had some sort of awe and superstition attached to it.18

Thus, Bartrum and Padel offer a feasible explanation for the peculiar avoidance of the name by the Britons who by the mid-6th century held ‘Arthur’ in sufficient awe and superstition that no one would use the name. However, the use of a legendary superhero’s name did not prove prohibitive to Irish-immigrants who may have adopted the name to boost their own military reputation. We find a similar situation among the Irish where the name of the mythical figure Cú Chulainn was likewise avoided by the Irish, suggesting that Arthur was regarded in a similar light.19

Posted by Edward Watson at 22:54 No comments: