Bog Bodies
Naturally preserved human corpses are not an uncommon find in the wetland peat bogs of Northern Europe. Preserved in the saturated sphagnum moss, optimal conditions for preservation, examples of  'Bog bodies' include the Osterby Head from Germany, Tollund Man from Denmark, Old Croghan Man from County Offaly in Ireland, Lindow Man from Cheshire, England, Grauballe Man in Jutland, Denmark, and the Windeby Girl from Northern Germany.

These well preserved bog bodies have proved to to be a treasure trove for archaeologists, opening  a window on the ancient North European peoples. In 1891 the Gundestrup cauldron was found in a bog at Himmerland, Denmark. Between 1946 and 1948, in the nearby Borremose peat bog three bog bodies were found, dating to the Nordic Bronze Age. The practice is indeed ancient, the oldest known bog body is Koelbjerg Woman, found in Denmark, dated to c.8,000 BC.

The vast majority of bog bodies discovered date from the Iron Age, and many display evidence of being stabbed, bludgeoned, hanged or strangled, or a combination of all these methods, the classic Celtic triple death of sacrificial offerings to the gods. Yet, others argue, citing the accounts of Tacitus as supporting evidence, that rather than religious sacrifices the bog bodies were criminals and outlaws who were executed before being unceremoniously dumped in the peat bogs.

The Mass Grave at Alken Enge
Excavations commenced in a peat bog near the village of Alken on Denmark's Jutland peninsula in 2009 revealed the Danish bog has been harbouring a sinsiter secret for thousands of years. To date the remains of around 240 Iron Age warriors had been found preserved  in the bog. At the time of the massacre the bog was a small basin by Lake Mossø, created by a tongue of land jutting into the lake. Many of the remains, aged between 13 and 45, exhibited cuts and slashes on the skeletons, typical of of slaughtered soldiers, suggesting they had died violently, yet, nothing certain is known about the identity of the victims or their slayers.

Danish archaeologists re-opened the mass grave in July this year to find new clues about their fate and the bloody practices of Germanic tribes 2,000 years ago at the edge of the Roman Empire. Archaeologists were confident they would end up with a scale much larger than the 240 that they had previously found as they had only touched upon a very small part of the bog. What they discovered was unique in Denmark and quite extraordinary in a European perspective.

In their further excavations the archaeologists discovered the skeletal remains of an entire army in an ancient mass grave at Alken Enge wetlands near Lake Mossø on the Jutland peninsula in Denmark. The remains of the Alken warriors were surprisingly well preserved and considered to be evidence of a sacrifice to the gods, confirming descriptions from Roman sources of atrocious war practices and shocking Teutonic massacres. Further, when the Teutons were victorious, they tended to kill all the surviving enemies.

Archaeologists have spent all summer excavating a small sample of what has turned out to be a mass grave estimated to contain the skeletal remains from more than 1,000 warriors, who were killed around 2,000 years ago. Test pitting at different places in the 40 hectare Alken Enge wetlands area continually revealed new finds, expected to be so massive that the archaeologists do not expect to be able to excavate all of it. They have so far only excavated an area of 80-90 square metres that contained bone fragments from around 240 men. The finds did not include complete skeletons but damaged human bones, including a fractured skull and a thigh bone hacked in half, along with the tools of war, axes, spears, clubs and shields, confirming that the bog at Alken Enge was the keeper of the remains from a sinsiter, violent event.

It is conjectured that the army beneath the bog may had been defeated and killed at a battlefield located some distance from the Alken Wetlands, as many of the archaeological finds in the area appear to come from afar. However, although unable to positively identify the battle site, the researchers are confident that the sacrifice occurred some time after the battle, as some of the the bones have bite marks on them and evidence of gnawing  indicating they were exposed to predators after death. Some time later, the remains of the fallen warriors remains were collected from the battle site, transported and sacrificially deposited into the waters of the lake that has since dried into a bog, thus preserving the remains.

Bog Warfare
The discovery of the remains of an entire army in an ancient mass grave is being portrayed as evidence of reports from written sources reporting macabre Teutonic practices and massacres. The researchers have compared the find at Alken to Tacitus' description of the aftermath of Rome's famous defeat in the Battle of the Teutoburg Forest, Northern Germania, in 9 AD when an alliance of tribes led by Arminius of the Cherusci ambushed and effectively destroyed three Roman legions led by Publius Quinctilius Varus:

“In the middle of the plain, bones lay either spread out or heaped, depending on whether they had fled or resisted. Next to the bones lay bits of spears and horse limbs, and there were also human heads nailed to trees. In the nearby groves were barbarian altars in which they had sacrificed tribunes and centurions of the first rank,” - Tacitus, Annals, Book I (The War in Germany).

Although groups of survivors reached the Lippe valley, the Roman army that had been permanently under attack since it had passed through the Kalkriese narrows, now effectively no longer existed. Tacitus writes that captured officers were sacrificed to Germanic gods.

Retrieving the bodies of the victims of battle some time later is not unusual. Tacitus says that there was a tomb for soldiers of the legions of Varus, the usual interpretation is that a tomb was later built on the main battlefield. The Roman general Germanicus marched to the Teutoburg Forest, where he buried the dead. The burial took place at the Kalkriese, where five pits were found that contained the remains of many adult males. The skeletons seem to have been exposed for a few years before they were finally buried.

Germanicus ordered Aulus Caecina Severus to retreat from the Teutoburg Forest with four legions (I Germanica, V Alaudae, XX Valeria Victrix, and XXI Rapax) by way of the pontes longi (literally "long bridges" in Latin, an expression to describe wooden roads built across bogs). These trackways were the only way through the peat bogs but left the Roman army very vulnerable in narrow columns. Groups of Germanic warriors under Arminius attacked the withdrawing Legions, but the Romans were able to force their way across the bog and finally reached the safety of the Roman legionary base at Castra Vetera (Xanten) on the Lower Rhine. Tacitus describes this hill as steep and adds that it was only approachable from one side.

Tacitus describes the pontes longi, as "a narrow causeway between vast marshes," a well-known type of trackway that has been identified across the bogs of north eastern Europe, the oldest dating back to the Neolithic, such as the Sweet Track in Somerset. Not all of the many trackways running across these bogs have been dated dendrochronologically, but the construction of Roman roads in the Osnabrückerland has been determined for the year 5 AD, such as at Dievenmoor, "the thief's bog,” region in southwest Lower Saxony in Germany, which extends into the state of North Rhine-Westphalia, the region dominated by the Teutoburg Forest.

The Bones of a Vanquished Army? 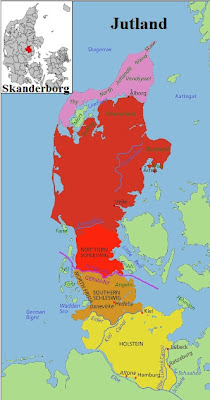 The discovery of human skeletal remains at Alken Enge should really be of no surprise. Several well-known sacrificial locations of differing context have been identified in the river valley of Illerup Ådal, known as the "Holy Valley", near Skanderborg. This area appears to have been a focal point for the wider community as a place to regularly conduct sacrificial rituals during the Iron Age; the Alken Wetlands is considered a very complex sacrificial location.

Yet we are left with the tantalising question of who were these slain warriors deposited into the dark waters of the lake at Alken Enge 2,000 years ago.

The sacrificed army was discovered in an area which has turned out to be brimming with archaeological treasures, where archaeologists have found around 15,000 objects, thought to be mainly weapons sacrifices from the Iron Age, but carbon 14 analysis has revealed that none of these could have belonged to the sacrificed army. Alken Enge appears to have been used a sacrificial site for some time.

Further, the archaeologists have not yet been able to determine the ethnicity of the slain warriors because they have found very few remains of weapons associated with them in the grave: a few arrowheads, the remains of a shield and a very well preserved axe, complete with a shaft, a very rare find.

Ejvind Hertz, curator at Skanderborg Museum said “The bones have been sacrificed months or even years after the warriors were killed. We won’t know until the bones have been carefully analysed.” He added, "The bones are completely fresh. Some DNA has been preserved, so we can get a good profile of what Iron Age man looked like."

Detailed analyses of the remains of the slaughtered warriors will endeavour to answer questions about who they were, where they came from and reveal the story of an entire army's apparent sacrifice.

The excavation project is a cooperation between Skanderborg Museum, Moesgård Museum and Aarhus University, supported by a DKK 1.5m grant from the Carlsberg Foundation.

Ritual Destruction of Iron Age Warriors
In 2012 archaeological excavations revealed the bones of an entire army, whose defeated warriors had been thrown into the bogs near the Alken Enge wetlands in East Jutland, Denmark. Continuing work has revealed a wooden stick bearing the pelvic bones of four different men. In addition the study team from Aarhus University, Skanderborg Museum and Moesgaard Museum has unearthed bones bearing marks of cutting and scraping, and crushed skulls suggesting a violent sequel took place after the fallen warriors had lain on the battlefield for around six months.
It appears the remains of the fallen were gathered together, the flesh was cleaned from the bones, which were then sorted and brutally desecrated before being cast into the lake.