In 1485 Sir Thomas Malory's epic account of King Arthur, Merlin, Lancelot and Guinevere, the Knights of the Round Table and the Quest for the Holy Grail were published by William Caxton as Le Morte D'arthur.

To commemorate 500 years since the publication of Malory's stories, on 3rd September 1985 the British Post Office issued a set of 4 stamps designed by Yvonne Gilbert showing Arthur consulting Merlin, Lancelot and Guinevere fleeing from Camelot, Sir Galahad and his Quest for the Grail and the sword Excalibur gifted from the Lady of the Lake. The stamps were available individually or in a presentation pack.

However, the 1985 issue only told half the story; key elements such as Arthur's final battle with Mordred and the journey to Avalon were sadly missing.

Now, for the first time since the appearance 1985, the Arthurian Legend has made a comeback and a set of 10 stamps first day of issue 16th March 2021.

There appears to be no particular reasons for this issue, the stamps do not appear to be linked to the release of a film or book, simply a celebration of the enduring Arthurian legend.

The new issue features 10 stamps in the set designed by Jaime Jones with new illustrations of key moments in the Arthurian legend: 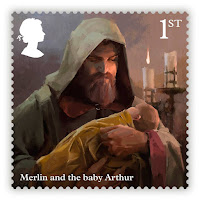 Merlin and the baby Arthur.
Merlin holds baby Arthur, the future king, whose origins remain shrouded in mystery, and in Merlin’s power, until Arthur is revealed to be Uther Pendragon’s rightful son and heir.

Arthur draws the sword from the stone.
Arthur’s birthright to the crown of England, according to later romance traditions, is confirmed when he pulls out the sword in view of the Archbishop of Canterbury and the whole court

Arthur takes Excalibur.
Arthur’s famed sword, Excalibur, is the gift of the Lady of the Lake, and a symbol of his tutelage by Merlin and his mission in the world.  Destined for greatness, Arthur excels in all human virtues.

Arthur marries Guinevere. Despite Merlin’s warnings, Arthur chooses Guinevere as his wife. Her dowry, Malory tells us, is the Round Table, which Arthur will use to build a fellowship of knights united around the values of loyalty and equality. 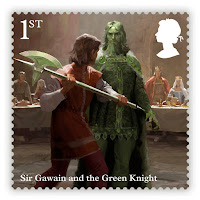 Sir Gawain and the Green Knight.
Arthur’s nephew and chief counsellor, Sir Gawain, here swings his axe to chop off the head of the Green Knight, whose deadly Christmas game of blows startles Arthur’s court and challenges its values.

Knights of the Round Table.
Around the Round Table, knights from Europe and all nations in the British Isles share the same values of loyalty and unite as equals to protect the weak and defend the realm.

Sir Lancelot defeats the dragon.
Emblematic since Arthur Rackham’s illustrations dating from the early 20th century, Lancelot’s slaying of the dragon shows God’s grace granted to Lancelot in the fight with the Devil/darkness, despite Lancelot’s own sins.

Sir Galahad and the Holy Grail.
Sir Galahad, the purest knight, is the epitome of perfection among Round Table knights, and the opposite of his father, Lancelot. 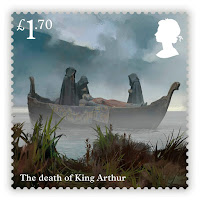 Arthur battles Mordred.
Arthur and Mordred meet for the last time in battle, fulfilling their destiny: Arthur’s, to be mortally wounded by his own son, and Mordred’s, to commit the sin of patricide and treason.

The death of King Arthur.
Following the battle of Camlan the mortally wounded Arthur is ferried to Avalon on a barge by three queens.

Royal Mail are offering the First Day Cover cancelled with the alternative Winchester postmark, which according to Thomas Malory’s Le Morte D'arthur was the site of Camelot. 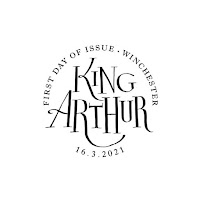 Posted by Edward Watson at 17:37 No comments: