The Viking Art of Navigation

The Vikings were renown as seaborne raiders of north west Europe and a dominant force for 300 years between AD 750 and AD 1200. The Vikings were known to have travelled vast distances navigating by the sun using a special sundial or ‘sundisc’. However, how the Vikings navigated in cloudy or foggy situations, when the 'sundisc' was unusable, was not fully understood until recently.

The word 'Viking' is a modern revival, the term is not known from Middle English, but by the 19th century it had come to mean a Scandinavian pirate. The term 'Vikingr' was used only in Denmark and the West Norse area as attested in the Norse prose histories known as the Sagas of the Icelanders and found on several Scandinavian rune stones, usually explained as meaning "one who came from the fjords," from 'vik' meaning "creek, inlet, small bay".

The Modern English term Viking is thought to have derived from Old English 'wicing' and Old Frisian 'wizing' which are almost 300 years older than the Sagas of the Icelanders and thought to derive from 'wic' as in "village, or camp", related to the Latin 'vicus' meaning "village, habitation", referring to their temporary camps, an important feature of the Viking raids which commenced in Britain in 793 AD with the attack on Lindisfarne. The later Norse raiding armies who settled in England were generally referred to as 'Danes'. 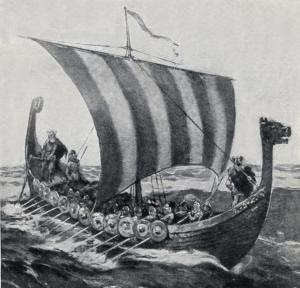 In the Sagas the word 'Viking' refers to a seaborne warrior taking part in an oversea expedition, such as their famed longship journeys as far afield as the Russian Volga and across the northern Atlantic to Newfoundland in the New World. According to 'Eirik the Red's Saga' Norsemen first settled Greenland in the 980's AD and started to explore lands westward only a few years after the Greenland settlements were established.

The Sagas tell that Leif Erikson landed on the shores of a beautiful place with references to wild grapes, hardwoods, butternuts, that he named Vinland (Vine land). The length of day recorded in the sagas has led to speculation that Leif’s Vinland was somewhere between New England and Newfoundland.

Tales claiming the Vikings reached the New World 500 years before Columbus did not become widely known until the 19th century, and since then scholars have debated their veracity claiming the content of the sagas cannot be relied upon as primary evidence and arguing that seaborne Norsemen could not have successfully navigated across the Atlantic solely by the sundial or ‘sundisc’ alone which would be ineffective in cloudy weather. The magnetic compass was not then known in Europe and in the short summer nights of northerly latitudes they would also have had limited views of the stars to guide their way across the ocean. It has long been suspected that the Vikings must had some other navigational aid.

In 1960 evidence of Vikings in North America came to light at L’Anse aux Meadows in Newfoundland, Canada. Several Norse artifacts and clear Icelandic- style house foundations were uncovered providing proof that Vikings had indeed landed, and briefly settled, in North America before Columbus. More recent archaeological work has revealed over 300 years of intermittent contact between the Greenlandic Norsemen and Native American peoples, primarily with the Inuit people in the Canadian Arctic. While the Norse colony in Greenland lasted for almost 500 years, the continental North American settlements were small and do not appear to have developed into permanent colonies. 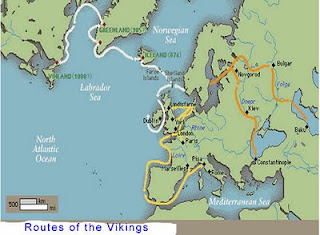 How did the Vikings navigate across the northern Atlantic to the New World?

The Sagas tells of a glowing 'sólarsteinn' or ‘sunstone,’ that, when held up to the sky, revealed the position of the Sun even on a cloudy day. References to these mysterious sunstones are found in the Saga known as the Sigurd legend. The story of Sigurd is told in the Völsunga Saga, a late 13th century Icelandic prose rendition of the origin and decline of the Völsung clan, although the origins of the material are thought to be considerably older.

The Saga tells that:
"The weather was very cloudy. It was snowing. Holy Olaf the king sent out somebody to look around, but there was no clear point in the sky. Then he asked Sigurd to tell him where the sun was. After Sigurd complied, he grabbed a sunstone, looked at the sky and saw from where the light came, from which he guessed the position of the invisible sun. It turned out that Sigurd was right."

Past research has shown that some insects, including honeybees, use polarisation for navigation when the sun is obscured by clouds. This led to a hypothesis being developed in the1960's which suggested that under foggy or cloudy conditions, Vikings may have been able to determine the azimuth direction of the Sun with the help of skylight polarisation, as with the insects.

According to this theory, the Vikings could have determined the direction of the skylight polarisation with the help of a birefringent (double-refracting) crystal. Danish archaeologist Thorkild Ramskou suggested in 1967 that the enigmatic sólarsteinn (sunstone) could have been a piece of Icelandic spar, which is calcite in the form of a transparent, polarising crystal, common in Iceland. Other candidates for the sunstone include cordierite or tourmaline, both of which are common in Scandinavia and also function as polarising filters. 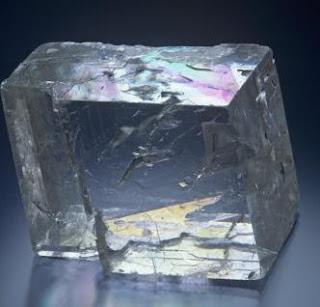 Recently a new study, published in the journal Philosophical Transactions of the Royal Society B, March 2011, reported how researchers tested these crystals in the high Arctic, Finland, Hungary and Tunisia when the sun was hidden. Scientists Gábor Horváth from the Eötvös University in Budapest and Susanne Ĺkesson from Lund University, have been investigating Ramskou’s hypothesis which had until now never been tested.

A polarising crystal allows only light polarized in one direction to pass through, and it appears dark or light depending on its orientation to the polarised light. Sunlight becomes polarised through the scattering of air molecules in the atmosphere, with the line of polarisation at a tangent to concentric circles with the sun at their centre. Ramskou postulated that by rotating a polarizing crystal the Vikings could determine the direction of polarisation and therefore the position of the sun when it was hidden by fog or was just beneath the horizon.

In 2005, Horváth and Ĺkesson crossed the Arctic Ocean and measured the polarisation patterns of the sky under a wide range of weather conditions in totally overcast skies. They were surprised to learn that these patterns were very similar on clear and cloudy days and even when the ground was covered over by snow and ice, although the polarisation was weaker in overcast conditions. They concluded that these polarising crystals function in much the same way as the mythical sunstone of the Vikings, suggesting the Norsemen could have used this information to determine the position of the sun even when obscured by cloud or fog and navigate across the northern Atlantic in high Arctic zones.

Viking 'sunstone' more than a myth

UPDATE 2012
Further research in 2011 on a crystal recovered from a 16th century shipwreck indicated that such sunstones could indeed have been used by the Vikings to successfully navigate across the North Atlantic to the New World.

Writing in the journal Proceedings of the Royal Society A, a team led by Guy Ropars at the University of Rennes in Brittany, describe tests on a a piece of Icelandic spar found aboard a sunken Elizabethan military ship discovered off Alderney in the Channel Islands in the 1970s. The study team came to the conclusion that using the Icelandic spar as a depolarizer, the Vikings could have performed precise navigation under different conditions.

The study suggests that the sunstone may still have been in use on board ships more than four centuries after the Vikings, proving invaluable in avoiding navigational errors as just one of the cannons aboard the ship would have disturbed a magnetic compass by as much as 90 degrees.

UPDATE 2013
In March 2013 researcher's declared that a crystal found in the wreck of a 16th-century English warship dispatched to France in 1592 by Queen Elizabeth I that foundered off the island of Alderney, in the Channel, is indeed a sunstone, the near-mythical navigational aid said to have been used by Viking mariners.

The theory first aired 45 years ago claimed that a sunstone, a device that fractures the light, could enable seafarers to locate the Sun even when it is behind clouds or has dropped below the horizon. Sunstones, could have helped the great Norse mariners to navigate their way to Iceland and even perhaps as far as North America during the Viking heyday of 900-1200 AD, way before the magnetic compass was introduced in Europe in the 13th century.
Shipwreck find could be Legendary Sunstone

UPDATE 2014
In a paper published in Proceedings of the Royal Society A: Mathematical, Physical & Engineering Sciences a team of researchers working in Hungary has proposed that a sun compass artifact found in a convent in 1948 might have been used in conjunction with crystals to allow Vikings to guide their boats even at night.

Since the discovery of the sun compass fragment, researchers have theorized that Viking sailors used them to plot their course, at least when the sun was shining. They didn't have magnetic compasses, however, which suggest they must have had some other means for steering in the evening or the later hours. In this latest effort, the researchers describe a scenario where the Vikings might have used a sunstone to help them use light from the sun below the horizon with a sun compass fragment operating in similar fashion to a sundial.


UPDATE 2016
Viking navigators analysed the skylight polarization with sunstones in cloudy/foggy weather. Combining these sunstones with their sun-dial, they could determine the position of the occluded sun, from which the geographical northern direction could be guessed. However, the theory is still unproven, Now Laboratory experiments have studied the accuracy of the first step of this sky-polarimetric Viking navigation.
Royal Society Open Science January 2016