Concerns had been voiced about the impact the construction of the new relief road from Weymouth to Portland would have on Ridgeway Hill, an Area of Outstanding Natural Beauty (AONB) in Dorset, England. As ever, the protests failed to stop the cutting of the new road through Ridgeway Hill but nobody could have foreseen the discovery about to be unearthed by the road builders.
The relief road would roughly follow the line of an old Roman road that ran from a small port at what is now Weymouth to Dorchester (Roman Durnovaria), passing close by the Iron Age hill fort of Maiden Castle. The new road was designed to reduce traffic congestion between the A354 and the A353 routes from Weymouth to Dorchester prior to sailing events coming to Portland for the 2012 Olympic Games.
In June 2009 a mechanical digger uncovered an old quarry pit on the Ridgeway Hill. Human bones were observed and construction work stopped while the archaeologists were called in. This was at first not surprising as the early excavations on the site in 2008 revealed one of the main themes of the Ridgeway was its use as a burial site from prehistoric times. But on this occasion the digger had hit the edge of a pit containing around 50 skeletons, all had been decapitated, their bodies thrown into an old quarry pit with their heads piled up to one side.

The remains were all male with the overwhelming majority aged from their late teens to about 25-years-old, with just a small number of older men. Most of the skulls show evidence of multiple blows to the vertebrae, jawbones and skulls with a large, very sharp weapon such as a sword. Splinters of bone indicate the execution took place at the pit. The lack of any other finds with the skeletons suggests that the men were probably stripped naked either before being killed or before being buried because there was no evidence of clothing, such as buckles, pins or toggles. Without doubt this was the site of a mass execution.
The bodies showed no obvious battle wounds indicating that the men were captives who were more than likely executed at the same time, all decapitated with a very sharp weapon, most probably a sword. But it was not a straight one strike and head off; the bodies seem to have all been hacked around the head and jaw, on one the collarbone has been sliced through. It would appear to have been a rather messy mass execution with several strikes of the blade required to complete the decapitation. One man had his hands sliced through, he may have been trying to fend off the sword blow as he was being executed. The location is typical of a Saxon execution site, on a main road and parish boundary and close to prehistoric barrows. There were more bodies than heads, the final count revealed a maximum number of 52 headless bodies and 47 skulls. It is thought some heads were taken away as trophies or mounted on stakes along the Ridgeway. 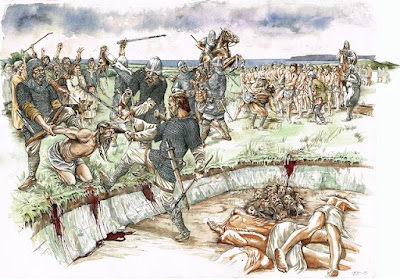 Results of analysis of teeth from 10 of the men, released in March 2010, revealed they had grown up in countries with a colder climate than Britain's. Isotopes in the men's teeth also show they had eaten a high protein diet, comparable with known sites in Sweden, these men almost certainly originated in Scandinavia.
Initial radio-carbon dating returned a date between AD 910 and AD 1030, the classic Viking period, which fuelled the theory that this was a group of Vikings landing on the coast, coming inland to raid, and perhaps being caught by the local population. This is supported by the Anglo Saxon Chronicle which records Viking pirates raiding along the south coast in the 980’s.
St Brice’s Day Massacre
Further analysis of these results has now narrowed the probable date range down to between 970 and 1025 AD which has led to the suggestion that the Ridgeway Hill mass grave could be evidence of the conflict between Saxons and Viking settlers that took place during the reign of the Saxon King Ethelred the Unready, or the Ill-Advised, 978 to 1016 AD.
Æthelred had paid tribute, or Danegeld, effectively a tax to the Danish King, from 991 in order to prevent the country from being ravaged by Viking raiders. However, on St Brice’s Day 13th November 1002 Æthelred ordered the death of 'all the Danish men who were among the English race'.
Historians generally regard the St Brice’s Day massacre as a reaction of a people who had been continually harassed and pillaged for over a decade by the Northmen. Yet it seems it was far from a full scale attack on Viking settlers with little evidence of a mass slaughter. Indeed, the pent up anger of the Saxons does not appear to have been directed toward the inhabitants of the Danelaw where the Danes would have been too strong and was probably confined to frontier towns such as Oxford, and larger towns with small Danish communities. 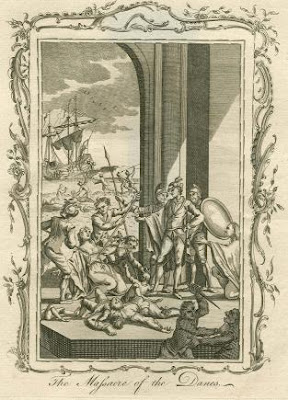 This view seems to be upheld by the findings of the excavation during 2008 at St John's College, Oxford. Prior to commencing construction work of new student accommodation at the Oxford University college archaeologists were summoned to investigate the site in January 2008. Following  just a few hours of digging the archaeologists discovered the remains of a Late Neolithic earthwork enclosure, or henge, close to the north-south road.
The skeletons of between 34 and 38 young men, aged 16 to 25, were found disrespectfully dumped in the henge ditch. They were more robust and taller than average, some bearing older scars indicative that they were professional warriors and all initially thought to be Danes killed during the St Brice's Day Massacre. The severity of the wounds suggests the young Viking men were brutally slaughtered, the skeletons showing evidence that each individual was stabbed many times shortly before, and probably after, death.
There is also evidence of charring on some of the skeletons, showing they may have been exposed to burning before burial and thrown into the makeshift grave of the henge ditch. The evidence of knife wounds and the burning of the bodies is consistent with the documented account of the St Brice's Day Massacre at St Frideswide’s Church, Oxford, where terrified Danish families broke into the church for sanctuary. The church was burned down by the local people and presumably the Danes with it.
The date range and isotopic analysis of some the individuals found in the mass burial site at St John’s College, Oxford, suggests similar origins to the Weymouth Viking group which indicates these were raiders rather than settled Danes. We should therefore also consider the Weymouth Vikings in the context of the St Brice’s Day massacre.
Gunnhild, the sister of Sweyn Forkbeard, son of the powerful Viking king Harald “Blåtand” (Bluetooth), was said to be among the Danes murdered at Oxford. He sought retribution the following summer by sacking Exeter and increasing the Viking onslaught on Wessex until by the time of the death of Æthelred in 1016 nearly all England was ruled by Cnut, the son of Sweyn Forkbeard.
Bluetooth
Some of the finds from the Weymouth Viking group were displayed at the Vikings: Life and Legend exhibition at the British Museum in 2014. One strange exhibit from the massacre on Ridgeway Hill was a skull displaying teeth that had been deliberately filed with horizontal grooves carved into two of his front teeth. 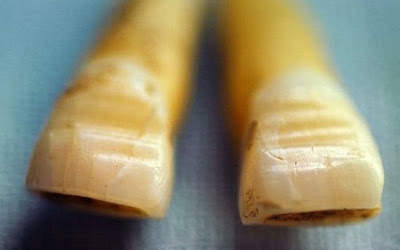 The purpose of this practice is unknown but several similar instances have been recorded from contemporary burials in Scandinavia in 24 men dating between AD 800–1050. This dental practice was first noted in 2005 and caused much speculation ever since; however, it seems likely it was to identify a certain type of warrior. The filed teeth from the Weymouth skull is the only known example of this practice found in England. It seems this individual was someone significant. This is supported by the fact that the skull was matched to the body at the bottom of the pit, indicating he was first to be executed.
It has long been thought that Harald Bluetooth was so named as he would have had a discoloured tooth that had simply gone rotten. However, it has been suggested that these grooved teeth may have been deliberately filed to hold coloured pigment, which would have been visible when he screamed battle orders and provides a believable explanation for Harald’s epithet. Although little understood, this rare dental marking technique appears to be related to warfare indicating the Weymouth skull belonged to a battle leader, possibly of Royal blood.
Source:
For the full story of the Weymouth Vikings see: A Viking Massacre in Mike Pitts, Digging Up Britain, Thames and Hudson, 2019, pp.11-35.
* * *
Posted by Edward Watson at 23:00 No comments: