Reports throughout the press this week have claimed that King Arthur's Round Table has been 'discovered' inside a Roman amphitheatre in Chester.

On Monday, 19 July, on the Sky History Channel Arthurian historian Christopher Gidlow will claim that for a period of time Arthur held court at the fortified Chester Amphitheatre.

Confusion and scholarly debate has reigned for centuries over the location of the "City of the Legion". The ninth century Historia Brittonum lists the city as the site of Arthur's ninth Battle, but the same document also provides a list of "cities" detailing two that could be the City of the Legions, : Cair lion and Cair ligion, generally considered to be Caerleon-upon-Usk and Chester respectively.

The confusion is added to by Geoffrey of Monmouth, Arthur's medieval chronicler, who in writing his Historia Regum Britanniae (History of the Kings of Britain) c. 1136, placed the King's court at Caerleon-on-Usk (Roman Isca) in South Wales, one of the most important cities in Britain, possibly to please his patron Robert of Gloucester, Lord of the Monmouth Marches. Geoffrey fails to mention the Round Table in his story, but tradition states that the old Roman amphithetre at Caerleon was known as the ‘Round Table’.

According to Gildas, followed by Bede, Roman Caerleon was the site of the two early Christian martyrdoms of Julius and Aaron.

Historians now believe that they may have pinpointed the exact location of the famous Round Table inside the former Roman amphitheatre at Chester, claiming that the 'table' was in fact the circular space inside Chester Amphitheatre, suggesting that noblemen would have occupied the arena's front row, with lower-ranked members on the outer stone benches. 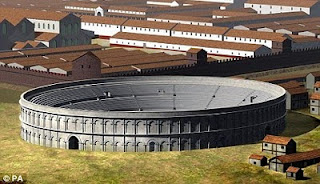 There are also strong reasons to suggest that the amphitheatre itself was in fact Camelot, a massive stone-and-wood structure, capable of holding 10,000 people and that Arthur may have taken over the abandoned structure, reinforcing the building's 40ft walls in the process.

Historian Chris Gidlow told the Daily Mail: ‘The first accounts of the Round Table show that it was nothing like a dining table but was a venue for upwards of 1,000 people at a time.'

‘And we know that one of Arthur’s two main battles was fought at a town referred to as the City of the Legions. There were only two places with this title. One was St Albans, but the location of the other has remained a mystery.’

‘In the 6th Century, a monk named Gildas, who wrote the earliest account of Arthur’s life, referred both to the City of the Legions and to a martyr’s shrine within it.' he added. 'That is the clincher. The discovery of the shrine within the amphitheatre means that Chester was the site of Arthur’s court – and his legendary Round Table.’

King Arthur’s Round Table Revealed is on The History Channel on Monday, July 19, at 9pm.


See: The Round Table Revealed?