Who Was The Real Arthur?

Poll Results
For the months of April/May Clas Merdin has been running a poll on the identity of the Real Arthur.
A select list of the most popular candidates was offered with the addition of a final category for those who doubt the King's historical existence.

Not surprisingly the two most likely candidates for an historical Arthur came joint top of the poll with 37% each:

Ambrosius Aurelius
According to Gildas the Last of the Romans who's family wore the purple, and led the beleaguered Britons to victory at the Battle of Badon Hill, c.495AD. Nennius claims Arthur was the leader of the Britons at Badon making Ambrosius a strong contender for the historical Dux Bellorum. Little is known of the historical Ambrosius outside of Gildas. Right time, right place, right result. 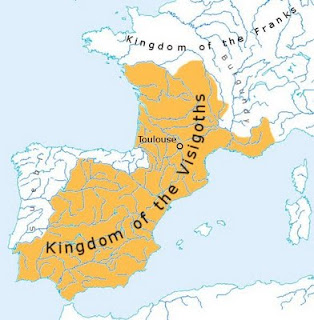 The name Riothamus may actually have been a title meaning "high-king" which would agree with the chronicler Jordanes, who stated he was called "King of the Britons".  He was active in Gaul c.470 AD. In The Origin and Deeds of the Goths, Jordanes states that Riothamus supported the Romans and "came with twelve thousand men into the state of the Bituriges by the way of Ocean" against Euric's Visigoths. A letter from Sidonius Apollinaris implies that Riothamus was betrayed by the Praetorian Prefect of Gaul, Arvandus who told Euric that "the Britons stationed beyond the Loire should be attacked". Consequently the Goths intercepted Riothamus' army and he was heavily defeated fighting against overwhelming odds. He was last seen heading toward Avallon in Burgundy. Could Riothamus have been healed at Avallon and returned to Britain to fight he Battle of Badon some twenty odd years later?

The theory of King Arthur as Riothamus who met his demise in France is not a new one and has been championed in recent years by Geoffrey Ashe in The Discovery of King Arthur, (1985) and more recently by Marilyn Floyde, King Arthur's French Odyssey (2009).

However, Léon Fleuriot has argued that Riothamus is identical to Ambrosius Aurelianus which is compatible with the Poll result.

The only other serious contender to these two most likely candidates was that Arthur never existed coming in at 11%. This is suggestive of a growing number that see Arthur, pre-Geoffrey of Monmouth, as a non-historical character, a mythical figure of early Welsh poetry who journeys to the Otherworld at will, fighting monsters and accompanied by deities from the Celtic pantheon.

This one-day symposium to be held at Glastonbury will focus on the archaeological analysis of the excavation archive from 1908 to 1979,  exploring the latest research into the historic excavations, with the aim to significantly improve understanding of Glastonbury Abbey and its central role in British monasticism. The current Glastonbury Abbey Excavation Archive Project, conducted by the Archaeology Department, University of Reading, funded by the Arts & Humanities Research Council and supported by the Somerset Archaeological & Natural History Society, is studying and analysing the records of archaeological excavations on the site since the beginning of the 20th century and will provide new information about the Abbey.

Excavations at Glastonbury Abbey began soon after the site was purchased for the Church of England in 1907, although a series of trenches had been dug by St John Hope three years earlier. Since then, 34 seasons of excavations up to 1979 has exposed most of the plan of the medieval church and evidence of earlier phases of the monastery. Yet very little of this evidence has been published. In 1981, C A Ralegh Radford, Director of excavations from 1951 to1964, published an interim report which suggested the site hosted a series of churches, a Saxon enclosure ditch, potentially the earliest cloister in Britain, and craft-working activities including unique glass furnaces. Full publication was never achieved and consequently details of these discoveries have remained unavailable. 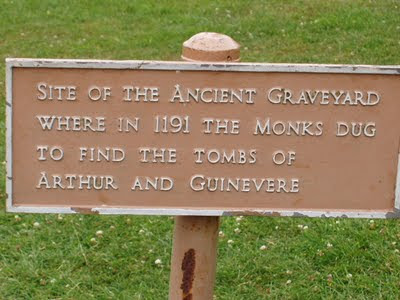 In his excavations at the Abbey in the 1960s, Ralegh Radford set out to discover the earliest religious activity on the site. He uncovered an ancient cemetery of stone-lined graves where, nearby he found traces of a small timber structure thought to be the original church of St Mary. He also found several post-holes which he interpreted as traces of at least four early wattled oratories. However, there was no dating evidence found for these features, but all lay below later Anglo-Saxon features and were characteristic of an early Celtic monastic settlement. He also found two mausolea within the ancient cemetery. These rectangular tomb-shrines were designed to hold the bodies of saints or revered members of the community and probably marked by a standing cross. Mausolea of this type are relatively rare in Britain, being more common in France, and belong to a very early class of burial. One of the mausolea was found 50 feet south of the Lady Chapel and thought to have been marked by the southern of the two crosses, or pyramids as William Malmesbury called them in the early 12th century. According to Gerald of Wales this was the place Arthur's grave had been found by the monks of the Abbey in 1191. During his excavations at this site Ralegh Radford found evidence of previous disturbance of a large hole between the pyramids which was immediately refilled with soil containing many mason's chippings of Doulting stone, a local stone which was first used at Glastonbury during the reconstruction of the Abbey after the fire of 1184. Ralegh Radford asserted that it was certain that the large hole he found between the site of the pyramids in 1962 represents the excavation for the bodies of Arthur and Guinevere.

Ralegh Radford was co-founder with Geoffrey Ashe of the Camelot Research Project which later carried out large-scale excavations at South Cadbury, Somerset, in 1966-70 under the direction of Leslie Alcock in search of Arthur's Camelot. The three men have been largely responsible for promoting Arthur as an historical figure who was buried at Glastonbury Abbey. However, most scholarly opinion believes the exhumation at the Abbey to have been a hoax. *

Following Radford's death in 1999, his excavation archive was retrieved and deposited with the National Monuments Record at Swindon, making the publication of a full report a feasible proposition. 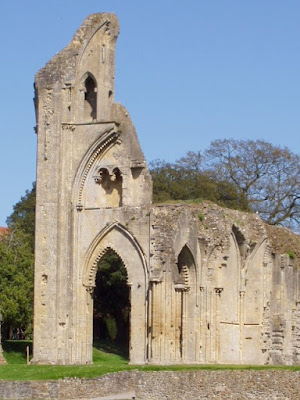 In 2007, a one-year pilot project, funded by the British Academy, demonstrated the enormous potential of the excavation material, in particular the Radford archive which was found to be almost complete. Radford's excavations carried out at the chapter house were selected for detailed analysis, and a geophysical survey of the Abbey Site was undertaken by the University of Reading. An interim report on the chapter house was published as a Fieldwork Highlight in Medieval Britain and Ireland 2007, Medieval Archaeology 52.

The current project involves full analysis of the excavation records, the results of which are now being entered into an Integrated Archaeological Database.

The Glastonbury Abbey Symposium programme begins with Registration in Glastonbury Town Hall at 10.00, followed by history and archaeology tours in the Abbey grounds with John Allan and Dr Jerry Sampson.

After lunch, Dr Cheryl Allum, University of Reading, Research Assistant for the Project, will deliver a talk entitled “Unravelling Radford; the 1951-1964 Excavations at Glastonbury Abbey”. Dr Allum will provide a summary based upon preliminary analysis of the 1951 to 1964 excavations conducted by Dr Ralegh Radford at the Abbey. The circumstances of Radford's appointment will be presented, followed by a summary of the developing archaeological techniques and methodologies employed during the 1950's and 1960's, a period that witnessed the emerging discipline of medieval archaeology.

Claire Stephens, Senior Archaeological Geophysicist,  discusses the 2009 geophysical survey carried out in the Abbey grounds, which formed part of a wider research project with two main objectives: to identify previously known Abbey remains, and if, possible, any responses that might represent excavation trenches, thereby assisting in their accurate mapping; and to provide new information on the surviving buried deposits within the whole of the Abbey precinct.

Following a talk by John Allan on the Glastonbury Pottery Collection, the Symposium comes to its finale with "The Cloister of Henry of Blois at Glastonbury Abbey” by Dr Ron Baxter, Research Director of the Corpus of Romanesque Sculpture in Britain and Ireland, in which the blue lias fragments associated with the mid-12th century cloister have long been recognised as important sculpture of the highest quality, but they have never, until now, been given the attention they deserve. Indeed their stone was long misidentified and the first to be discovered was for a time attributed to the wrong foundation. This project has provided the opportunity to rectify the situation, and to air some hypotheses about the form of the cloister as well as its decoration.

Finally, the Symposium is concluded by Professor Roberta Gilchrist, Director of the Archaeology Project.

What no Bligh Bond?
It is difficult for archaeologist to ignore the 12th century exhumation of Arthur and Ralegh Radford's subsequent identification of the site of the grave in 1962, but the use of controversial methods such as "psychic archaeology" is quite another.

In 1908 the Church of England appointed Frederick Bligh Bond as director of excavations at Glastonbury Abbey and quickly had remarkable success. It wasn't until he published The Gates of Remembrance in 1919 that he revealed that he had used psychic methods, such as automatic writing in dictated messages received from the monks of Glastonbury, “The Company of Avalon,” who guided his excavations of the Abbey. Consequently he was dismissed by Bishop Armitage Robinson in 1921.