The New County Flag of Staffordshire 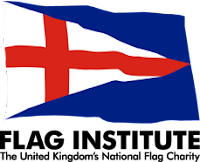 Result of the Vote for The County Flag of Staffordshire

County Flags have become an important part of our regional and national identity. Most English counties have a recognised County Flag, but Staffordshire did not. The Flag Institute, the UK’s national flag charity, maintains the register of County Flags, which can be viewed on their website (www.flaginstitute.org) and works with county organisations to come up with suitable designs. The County Flags are based on the historic counties of the UK, rather than the modern administrative areas, so Staffordshire includes Stoke-on-Trent, Wolverhampton, and several other parishes that fall outside Staffordshire County Council’s area.

Votes for each design:

The Staffordshire Heritage Group design is therefore the winner and it will be added to the Flag registry as the County Flag of Staffordshire. The Staffordshire County Council design will, of course, remain the Council's own flag, as it is a banner of their arms.

The winning design is shown below:


The gold background and red chevron comes from the coat-of-arms of the de Stafford family and has been used in connection with the county since at least the 17th century. The knot is an ancient symbol of Staffordshire, used by many organizations, including the Staffordshire Regiment and Staffordshire Cricket.

Posted by Edward Watson at 20:30 No comments:

News emerged this week that support is growing for a 114 foot (35 metre) high statue termed the “Anglo of the North” which would overlook the M6 motorway near Stoke-on-Trent.

With nearly half of the £3.5 million needed already raised, Stoke-On-Trent City Councillor Terry Follows, said, “This is an ambitious project but we already have significant support and together with our partners we are determined to deliver. The benefits would be huge for the city and county.”

The City Council claim the benefits of the warrior statue would be great and “put the city on the map” increase tourism and boost the local economy. Locating sculptures beside main traffic routes as landmarks is a growing trend.

Sir Antony Gormley's well-known steel sculpture  the “Angel of the North” located beside the A1 near Gateshead in Tyne and Wear in 1998, at 20 metres tall is one of the most viewed pieces of art in the world and said to attract £4 million of income a year to Gateshead. Similarly, authorities in Liverpool estimate the Beatles statue attracts around £8 million of business to the city each year.

Andy Scott's “Arria” the 10 metre high sculpture made of galvanised, welded steel nick-named the “Angel of the Nauld” overlooks the North bound carriageway of the M80 north of Auchenkilns. It is a moving sight when seen with its internal illumination at night. Scott has now completed seventy commissions such as the Water Kelpies at the Falkirk Wheel and the Heavy Horse beside the M8 motorway in Glasgow which have become popular landmarks.

Sited on roundabouts at either end of Town Meadows in Uttoxeter, Staffordshire, marking the 'point of arrival’ into the historic town are two Scott sculptures known as the Centaur, with winged hoof, and the Bull symbolising the market town and the racecourse. However, the Council was criticised for spending £95,000 on the two Scott sculptures, commissioned as part of Uttoxeter's regeneration programme. So why not Stoke-on-Trent?

The Council argue that the Saxon Warrior situated near the M6 motorway at Stoke-on-Trent would be a signpost to the city, attracting business and publicity to leisure attractions.

Once a heavily industrialised area with coal mines and steel works, the six towns of Hanley, Burslem, Longton, Stoke, Tunstall and Fenton, formed a district known as the county of “Staffordshire Potteries” and brought together in 1910 as the county borough of Stoke-on-Trent.

Stoke-on-Trent has been the home of the ceramics industry in England for over 300 year and is affectionately known as the “Potteries” made world famous by Josiah Wedgwood and his distinctive Jasperware. Today less than 50 bottle-kilns survive in Stoke-on-Trent, the best preserved at The Gladstone Pottery Museum in Longton, typical of those once common across North Staffordshire.

Famous sons of the city include Reginal Mitchell, designer of the Spitfire and Edward John Smith, the son of a potter who became Captain of the ill-fated RMS Titanic.

Saxon Staffordshire
The Potteries dialect is said to derive originally from Anglo Saxon Old English. Indeed, the 14th-century Middle-English poem Sir Gawain and the Green Knight uses dialect words native to North Staffordshire and the Potteries, leading to the belief that the work was written by a monk from Dieulacres Abbey near Leek.

One of the most common place names in the United Kingdom, “Stoke” was originally from the Old English 'stoc' meaning simply 'dwelling place'. The majority of these had become independent centres by the late Anglo-Saxon period; the 'Stoke' placename is said to be very rare as a minor placename. Stoke was such a common name to distinguish this settlement it was given the affix of the name of the river Trent, a Celtic name, meaning possibly “great wanderer”. Significantly, the Mercian kingdom was centred on the valley of the River Trent and its tributaries.

Local historians claim Stoke-on-Trent was founded in 670 AD at the crossing place of a Roman Road; it is therefore possible that our placename may have derived from 'stoc(c)' meaning ‘tree-stump’ 'log' 'stake' or 'post' such as may be used in a causeway over wetland.

Discovered in a field near near Lichfield, Staffordshire, in 2009, the Staffordshire Hoard was valued at £3.3 million and jointly purchased by the Birmingham Museum & Art Gallery and the Potteries Museum & Art Gallery, Stoke-on-Trent. The purchase resulted in permanent displays at Birmingham and The Potteries. In addition, there are permanent displays of the Staffordshire Hoard in the Chapter House at Lichfield Cathedral and at Tamworth Castle.

These permanent display partners along with Staffordshire County Council have formed The Mercian Trail Partnership and organised a touring exhibition in which the Staffordshire Hoard will visit Bilston Craft Gallery, Wednesbury Museum & Art Gallery, Haden Hill House and Stafford Ancient High House during the summer of 2016.

For the first time UK visitors will have the opportunity to view a large number of items from the collection outside the West Midlands where it was discovered, when the touring exhibition will visit The Royal Armouries, Leeds from May 2016, followed by Bristol Museum and Art Gallery from October 2016.

The Staffordshire Hoard was first displayed at The Potteries Museum & Art Gallery in 2010 when 5,000 people queued for several hours over the first weekend to view a selection of 100 Anglo-Saxon artefacts. The Hoard has been on permanent display at  The Potteries Museum ever since and now includes a Saxon mead hall. 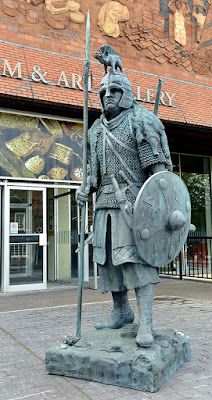 A 9ft clay statue of a Saxon warrior, designed by local artist, Blurton-born, Andy Edwards, was installed at the Potteries Museum & Art Gallery in 2012, exhibiting replicas of items from the Hoard such as sword pommels, helmet fragments and knife fittings, appears to be the inspiration behind the 114ft bronze Saxon Statue to be placed by the M6 motorway. But the Council claim the project was first proposed six years ago following the acquisition of the Staffordshire Hoard by the Potteries Museum.

The initial proposals would have seen the bronze statue erected on the Trentham Estate, overlooking the M6 near junction 15, but the council is also considering other locations within the city itself.

Terry Follows said: “We want to resurrect the plans for the statute, as we believe it would really put Stoke-on-Trent on the map. It could do for the Potteries what the Angel of the North did for the North East, or what the Blackpool Tower did for Blackpool.

“It would bring people here from all over the country and increase footfall for our businesses. People would come to see the statue and then come and visit the Staffordshire Hoard at the Potteries Museum. I think the warrior would be a fitting symbol for Stoke-on-Trent because this area was at the heart of the Kingdom of Mercia in Anglo-Saxon times.”