The obscure Anglo Saxon Saint Bertelin is said to have founded a hermitage on the Isle of Bethnei in the marshes around the River Sow where the town centre of Stafford is now located. St Bertelin’s chapel was excavated in the 1950s where a 1,000 year old wooden cross was discovered buried at the centre of the site. Is this evidence of the legendary hermit's first church?

St Bertelin's Chapel lay immediately west of the Church of St Mary in the centre of Stafford. The medieval chapel was demolished in 1801 and the site incorporated into the cemetery. The blocked former west entrance into St Mary's was the only surviving evidence for the existence of the chapel until the local authority decided to clear the gravestones and create a garden of remembrance. Ahead of the clearance the first recorded archaeological investigation at Stafford was carried out in 1954 at the site of St Bertelin's Chapel by Adrian Oswald, of Birmingham City Museum. Oswald claimed to have found the post-holes of a late Saxon chapel, and a wooden cross buried in a pit, within the foundations of the chapel of St Bertelin.

During the excavations at the west end of St Mary's Church, Oswald found a set of stone foundations interpreted as belonging to St Bertelin's medieval chapel. Beneath the stone was a set of post-holes with a central grave-shaped pit in the centre of the structure containing a large lump of oak with a cylindrical base that had been placed in a pit. This was initially interpreted by CA Ralegh Radford as a wooden cross of the Mercian period and subsequently the reconstruction was put on the site that we see still today.

Martin Carver argues that the shape of the wood lump, with a cylindrical base, and the leather attached to the top (i.e. inside), all suggest that this was a coffin, not a cross, resembling the tree-trunk coffins known from the 7th century onwards in East Anglia. Yet local literature still maintains this to be St Bertelin's preaching cross as the plaque at the site of the chapel reads: 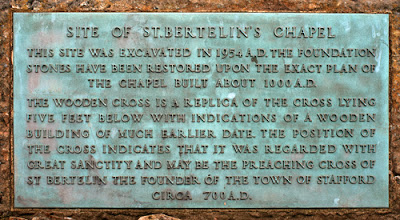 Still, it's good for tourism. A re-assessment by Carver in 1984 considered the finds in the context of other archaeological investigations at Stafford. Following demolition, the site of St Bertelin's chapel had been largely destroyed by 19th century burials with only patches of wall and floor and several early graves definable but the general sequence reported by Oswald was largely endorsed, i.e. a timber structure succeeded by a later stone chapel. However, the earliest part of the sequence associated with the timber structure and coffin was found to be inverted in respect of the dates; a layer of 9th century charcoal (830 - 845 AD) lay above the layer containing a Saxon farthing of Athelred II (971-1016) lost before 1,000 AD, which in turn lay above the 12th century log coffin. Hence it could be argued that the coffin was buried in a late 12th century stone chapel, set centrally to the nave of the chapel, back-filled with Late Saxon debris and a floor laid over the top, indicating the coffin was simply part of a late 12th century foundation process. Yet other finds from the site indicate a Late Saxon presence; a dress hook, book clasp and the farthing are all of a pre-Conquest date.

Given that the context of the coffin is insecure it must be considered that it is manufactured from an oak tree; consequently a range of dates is possible from the same trunk. However it would still be expected that the preserved heartwood could date considerably earlier than its deposition. Further, the 1971 dates were not calibrated. From other dates collected for Stafford a date of 1120 BP would calibrate to around 800-1000 AD. Similarly, the dates from the samples of charcoal fit comfortably within the expected Late Saxon occupation for Stafford.

An alternative interpretation proposed by Carver allows for the log coffin to have been buried within a timber structure dated to the period 800 - 1000 AD, too late to be used to endorse 8th century foundation legends associated with an 'Isle of Bethnei'. This timber chapel, or possible mortuary house, may have burnt down in the 9th century which would account for the charcoal layer. Carver has rejected the 1180 AD date for the log coffin as it cannot be certain to what it refers. The timber chapel was superseded by a stone chapel with a truer E-W alignment. The floor of this stone chapel would have sealed the log coffin and the layers above it.

This stone chapel appears to have fallen into disuse and was probably demolished around the time of the Conquest and then rebuilt in stone on an improved alignment. A layer of brown soil, interpreted as a layer of "disuse" appears to separate the floor of the first stone chapel from the second, later stone chapel rebuilt on the same site, slightly offset to the south, laid out in dressed stone indicating small nave and narrower chancel, with a tiled floor laid in the 14th century.

In conclusion, the best interpretation of the muddled evidence suggests the first chapel was constructed of timber in the period 800 - 1000 AD. A tree-trunk burial was placed centrally in this structure, and presumed to be an object of veneration. The dress hook, book clasp and farthing sit comfortably within the Late Anglo Saxon period. This date range allows the construction of the timber chapel to belong to the foundation of the burh by Æthelflæd in 913 AD, as with the majority of finds from Stafford, and seems likely to have been constructed during the reconquest of English Mercia.

The first building on this site seems to have been a Late Saxon timber chapel, commemorating an individual who may have been designated as St Bertelin whose shrine became a place of pilgrimage throughout the Medieval period. This interpretation concurs with the first historical reference we have for St Bertelin at Stafford which appears in a list of tombs of saints for pilgrims by Hugh Candidus of Peterbrough (d. c.1175) in a reference "in Stetford sanctus Berthelmus martyr".

Notes & References
Consecration marks final act of independence for Stafford church – Staffordshire Newsletter, 12 October 2013.
St Bertelin’s in Holmcroft, Stafford, was originally dedicated 57 years ago on 13th October 1956, and has always been part of the parish of St Mary’s, but today, 13th October 2013, the Bishop of Stafford, the Rt Rev Geoff Annas, will lead a service of consecration to mark the new parish of St Bertelin's in the Church of England,  comprising Creswell Manor and the Eccleshall Road, Holmcroft, Trinity Fields, Stone Road and Parkside.
M Carver, Anglo-Saxon Stafford. Archaeological Investigations 1954-2004. Field Reports On-line, 2010.
A Oswald, The Church of St Bertelin at Stafford and its Cross, Birmingham Museum, 1955.
M Greenslade et al, A History of Stafford, Victoria County History of Staffordshire, London, 1979, pp.238-42.

Posted by Edward Watson at 20:10 No comments: