"......men hold opinion that there was no such Arthur and that all such books as been made of him been but feigned and fables...[yet] there were many evidences of the contrary.

First, ye may see his sepulture in the monastery of Glastonbury; and also in Polychronicon, in the fifth book, the sixth chapter, and in the seventh book, the twenty-third chapter, where his body was buried, and after founden and translated into the said monastery. Ye shall see also in th’istory of Bochas, in his book De Casu Principum, part of his noble acts, and also of his fall. Also Galfridus, in his British book, recounteth his life. And in divers places of England many remembrances been yet of him and shall remain perpetually, and also of his knights: first, in the abbey of Westminster, at Saint Edward’s shrine, remaineth the print of his seal in red wax, closed in beryl, in which is written patricius arthurus britannie gallie germanie dacie imperator; item, in the castle of Dover ye may see Gawain’s skull and Cradok’s mantle; at Winchester, the Round Table; in other places Lancelot’s sword and many other things." [William Caxton, Preface to Malory's Morte d'Arthur]

1. Glastonbury: Ancient Avalon
The site of the tomb of King Arthur

2. Tintagel: Arthur's Castle?
Was there a Dark Age fortress here?

5. On the Trail of the Dragons of Emrys
The beginnings of the Merlin legend on a hill in Snowdonia

8. Arthur, Stonehenge and the Solstice
Was King Arthur buried within the Giants Dance along with his relatives?

9. Dover Castle: Gawain's Skull
Gawain, the greatest knight, is said to be interred at the castle

10. Dozmary Pool: Nothing but Waves.....
Is this isolated pool on Bodmin Moor the home of the Lady of the Lake? 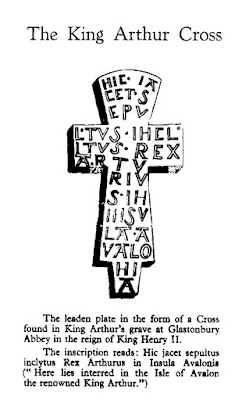 "It was there we took Arthur after the battle of Camlan, where he had been wounded. Barinthus was the steersman because of his knowledge of the seas and the stars of heaven. With him at the tiller of the ship, we arrived there with the prince; and Morgen received us with due honour. She put the king in her chamber on a golden bed, uncovered his wound with her noble hand and looked long at it. At length she said he could be cured if only he stayed with her a long while and accepted her treatment. We therefore happily committed the king to her care and spread our sails to favourable winds on our return journey." - Vita Merlini by Geoffrey of Monmouth (1148)

Ancient Avalon
Number One in the Top Ten Arthurian locations just has to be Glastonbury and the Abbey that played such a significant role in the development of Arthurian legend; where else can you visit the site where the monks actually dug for King Arthur's grave in the 12th century? Considered by many today as a hoax the legend of Arthur's burial at Glastonbury has endured for over 800 years.

Unlike most monasteries which are located in remote places of solitude, the Somerset town of Glastonbury grew up around the abbey precinct. Where else can you walk through a high street with shops with an abundance of books on the Abbey and the legendary King Arthur, shops selling crystals and gemstones, delights for vegans and Glastonbury pasties from Burns the Bread for those who are not, shops selling pagan artefacts galore next door to the Christian church of St John custodian of the fabled tomb of Joseph of Arimathea.

From the top of the High Street turn right and walk along Chilkwell Street. Soon you arrive at the gateway to Abbey House, a later construction in the 19th century set within the abbey walls. Take a step inside the gateway here, and looking back at the carvings on the masonry we see the shield of Joseph of Arimathea sporting the two cruets from Melkin's Prophecy.

Opposite this gateway is Dod Lane leading to a footpath to the Tor, this lane is on the same alignment as the axis of the Abbey church and said to continue all the way to Stonehenge in Wiltshire which John Michell considered to link the two sites through the sacred geography of the ancients.

Continuing along Chilkwell Street you soon arrive at Chalice Well gardens, home to the Red Spring of Glastonbury where the water is said to be so coloured as this is the site where Joseph of Arimathea hide the Holy Grail which he used to collect the blood of Jesus at the Crucifixion. This is a fascinating place with themed gardens and the famous cover to the Chalice Well sporting the vesica pisces design by Frederick Bligh Bond.

Leaving Chalice Well you cross Wellhouse Lane to join a footpath to the Tor, but before climbing the hill walk a few yards up the lane to see Glastonbury's White Spring. This is a healing well with the waters often collected by people seen queuing with containers of all makes and sizes. The two springs is one of Glastonbury's greatest mysteries; two different healing springs, one red, the other white, rising within a few yards of each other from the caves below the Tor.

The journey to the top of this enigmatic hill is a steep climb but worth the effort. Rising up from the Somerset Levels the Tor with its distinctive St Michael's tower is a landmark for miles around, the terraces indicate the hand of man has been instrumental in shaping this mound. The Arthurian scholar Geoffrey Ashe sees the terraces as part of a ritual labyrinth. John Michell discovered the St Michael line from here, an alignment that stretches across the widest point of Southern England, linking the high places of St Michael from Cornwall to Norfolk along the path of the Beltane sunrise.

Legends talk of this being a hollow hill containing a crystal cave; on midwinter night Arthur will ride out from the Tor along an ancient trackway toward South Cadbury Castle; this is the abode of Gwyn ap Nudd the King of the Fairies and gateway to Avalon, The Land Of The Dead. And not forgetting that the Tor was the site of the vile execution of the Abbey's last Abbot Richard Whiting.

From the Tor there are magnificent views as you would expect; Brent Knoll and the Bristol Channel, The Mendips forming a backdrop to Wells Cathedral, nearer is the dome of Chalice Hill and Wearyall Hill where Joseph of Arimathea thrust his staff into the ground and it grew into the Holy Thorn, sadly vandalised in 2010. Return to the Abbey, claimed to be the earliest Christian monastic site in Britain established by Joseph of Arimathea and the disciples of Jesus.

Shortly before the Dissolution in 1539 seven monks are said the have left Glastonbury Abbey with the Holy Grail and made their way into Wales, however, the myth of the Welsh Grail, or the Nanteos Cup as it is known, is another story.

Elucidation
Perhaps the real history of the Abbey commences with King Ine of Wessex who is said to have constructed the first stone church there, the base of which forms the west end of the nave. In the 10th century this church was enlarged by St  Dunstan, then Abbot of Glastonbury, who became the Archbishop of Canterbury in 960.

With the arrival of the Normans in the 11th century the Abbey was expanded and improved so that by the time of the Domesday Book Glastonbury Abbey was recorded as the richest monastery in the country. These great Norman structures were destroyed by the fire on St Urban's Day in 1184. The fire left the Abbey in desperate need of funds for reconstruction which sceptics claim led to the discovery of the grave of King Arthur and Queen Guinevere between two pillars in the monks cemetery on the south side of the Lady Chapel in 1191. There can be no doubt the discovery did bring enormous wealth in to the Abbey, but that does not necessarily qualify it as a faked event. 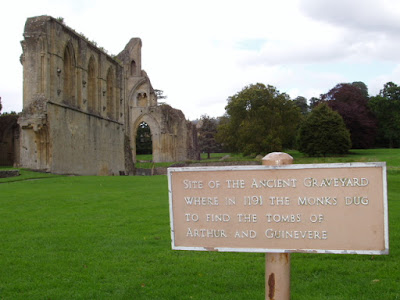 William of Malmesbury had been invited to write the history of the Abbey around 1125 by the Abbot Henry of Blois. Wiilliam had unhindered access to the entire Abbey library but made no mention of Arthur being buried here.

Caradoc of Llancarfan's Life of St Gildas, written around 1120, contains the earliest known tale of the abduction of Guinevere. In the tale Gildas is the abbot of Glastonia who brokers peace between Arthur and Melvas, abductor and king of the summer country. The tale becomes a significant episode of later Arthurian Romance and plays a key part in Arthur's downfall. Caradoc tells us that Glastonia of old was called Ynisgutrin meaning 'The Isle of Glass'. Before the Somerset levels were extensively drained for agriculture Glastonbury would have appeared as an island during seasonal floods. The Isle of Glass interpretation suggests Glastonbury was at one time known as the Celtic Otherworld realm of Caer Wydyr (Fortress of Glass).

Writing around 1136, Geoffrey of Monmouth tells us that Arthur is mortally wounded at the battle of Camlann then taken to the Isle of Avalon without hinting at a location or linking it to Glastonbury. However, any doubt regarding Glastonbury's association with the Celtic Otherworld was removed in 1191 when the Glastonbury monks discovered the grave of King Arthur and his Queen Guinevere containing a leaden burial cross. The cross was inscribed:

"Here lies the famous King Arthur, buried in the isle of Avalon"

The inscription varies slightly among the early sources but the version above is that given by John Leland who is said to have handled the cross on a visit to the Abbey between 1535 and 1539. William Camden provided a sketch of the cross bearing the same inscription in his 1607 edition of “Britannia”. The cross confirmed that Glastonbury was indeed the ancient Avalon.

King Richard I had reduced funding to Abbey as he poured his finances into the Crusades, yet the increase in pilgrims following the discovery of Arthur's grave very quickly restored its wealth. The Glastonbury Legend was enhanced with the addition of Joseph of Arimathea in the 14th century and the Abbey became the second wealthiest in the land.

Arthur's bones were reburied in 1278 in a black marble tomb before the High Altar within the Abbey Church in the presence of King Edward I. Here they remained until the Dissolution in 1539 when it appears the tomb was smashed and the remains of Arthur and Guinevere scattered to the four winds. 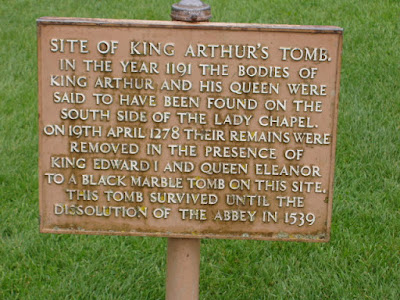 Posted by Edward Watson at 19:00 No comments: