West Midlands History has announced the forthcoming publication of a major new work on the story of the Anglo Saxon kingdom of Mercia by Dr John Hunt from the University of Birmingham.

The Anglo-Saxon Kingdom of Mercia 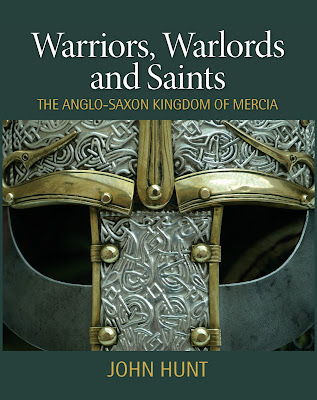 “Anglo Saxon Mercia was a great power in its day, although many aspects of it have been shrouded in myth and mystery.

However, recent discoveries, such as the Staffordshire Hoard and the Lichfield Angel, have shone a fascinating light into the world of Mercia and the Mercians. In the richly illustrated Warriors, Warlords and Saints: The Anglo Saxon Kingdom of Mercia, author John Hunt uses this evidence to paint a vivid picture of this political and cultural powerhouse which, at the height of its influence, ruled over much of England, and reached out across Europe into the Middle East.

The Mercians themselves were complex. They were a force capable of both great violence and great art, fostering the embryonic English Church and yet fighting bloody wars with the rival kingdoms of Wessex, Northumbria and East Anglia.

The story of the Mercians is integral to the story of Anglo Saxon England, from the end of Roman rule to the Norman invasion. It was a land peopled by ruthless kings, great ladies, brave warriors and famous saints who lived at a vital and compelling time in English history with Mercia at its heart.”

The Author
Dr John Hunt is an Honorary Research Fellow in the Department of History at the University of Birmingham and a member of the Centre for West Midlands History. He is the author of numerous books and articles on medieval history and archaeology.

West Midlands History
History West Midlands (HWM) is an independent website providing free access to a variety of media exploring the rich and fascinating past of the historic counties of Herefordshire, Shropshire, Staffordshire, Derbyshire, Warwickshire & Worcestershire.

The initiative was designed for anyone wanting to know more about the West Midlands region. All content is reviewed by academics led by Dr Malcolm Dick, providing a useful resource for students, tutors and anyone with an interest in the history of the region.

In 2013 West Midlands History published the first issue of History West Midlands magazine written by historians and researchers from the region.  Entitled “The West Midlands Enlightenment”  the inaugural edition explored the time of the 18th and 19th centuries when industrialists such as Matthew Boulton, Josiah Wedgwood and John Wilkinson were changing the face of manufacturing and thinkers such as Erasmus Darwin were challenging the established view of the world. Later editions included Glass and Glassmaking, The Power of Steam, and a special edition featuring Anglo Saxon Mercia and the Staffordshire Hoard.

The publication of the magazine ceased on 1st April 2016, the Spring Issue 11 'Art and Industry' was sadly the last. Although the content and quality of the magazine had been universally praised, it failed to generate sufficient income to sustain the project.

However, their website states that History West Midlands will continue to actively support programmes and activities which enhance understanding and enthusiasm for the region's unique history and heritage and will be expanding their book publishing.

It is still possible to order a special gift package "Unravelling the mysteries of the Staffordshire Hoard" from the Online shop. 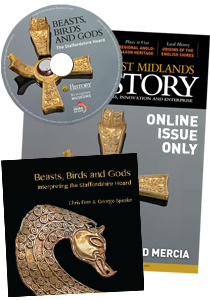 The Anglo-Saxons and Mercia (Issue 6 Autumn 2014) features the Staffordshire Hoard, which since its discovery in 2009, has drawn mass attention to the rich culture of the so-called Dark Ages between the end of Roman Britain and the time of King Alfred, resulting in an explosion of public interest in the culture and art of the Anglo-Saxons. Long queues formed wherever The Staffordshire Hoard was exhibited, amazing people with the incredible artistry of the Anglo-Saxon craftsmanship and intrigued by the enigmatic creatures hidden within the decorations of these precious objects.

The articles in this special edition of the magazine focus on the kingdom of Mercia and explore the ways in which historians and archaeologists are currently building the picture of the origins of the kingdom with a special feature on the Material Culture of the Anglo Saxons, culminating in an exploration of the latest thinking about the Hoard.

Further details can be found on the History West Midlands website.