Valle Crucis and the Grail 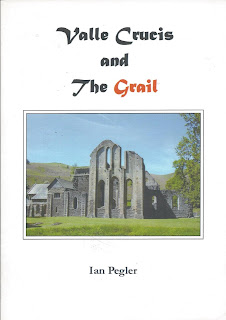 The massive success of Dan Brown's book The Da Vinci Code (2003) led to a huge upsurge in interest in the Holy Grail and its so-called guardians, the Knights Templar.

In the introduction to 'Valle Crucis and the Grail' author Ian Pegler recalls a BBC website article from 2006 that said owing to the town's links with the Grail legend, Llangollen hoped to benefit from the success of the Da Vinci Code. In this book Pegler's objective is an examination of the Grail connections at Valle Crucis Abbey, barely a mile and a half from the Denbighshire town.

The BBC article made reference to 'The Keys to Avalon' by Steve Blake and Scott Lloyd (Element, 2000), a controversial book that claims to relocate Arthur's true kingdom (Ynys Pridein) west of Offa's Dyke, an earthwork forming the ancient land boundary of Wales that the author's claimed was constructed by the Emperor Severus in the Late 2nd Century AD.

In 'Keys' it was claimed that the Grail was linked to Castell Dinas Bran sited on the hill high above Llangollen. Blake and Lloyd also claimed that 'Glaestingaburh' (the Saxon name usually used in reference to the Somerset town of Glastonbury) originally referred to a location in the Eglwyseg Valley; the site now occupied by Valle Crucis Abbey.

Those of us not convinced by Blake and Lloyd's alternative Arthurian history will perhaps read Pegler's work with some caution from the introduction onwards. (For a critique of The Keys to Avalon see this article by Keith Fitzpatrick-Matthews). But stick with it as Pegler raises some interesting points from Valle Crucis that certainly whet the appetite.

Any claims of confusion with Glastonbury is really unnecessary as the area around Llangollen offers plenty of heritage and legend of its own: Castell Dinas Bran; Eliseg's Pillar; Croes Gwenhwyfar; St Collen's Well; Craig Arthur on the limestone escarpment of Eglwyseg Mountain; and of course the sacred River of the Goddess flows through the centre of the town.

Pegler's book offers many tantalising glimpses of these mysteries, such as the possibility of a Roman villa underneath the cloister area located in the early 1900s by Reverend Owen. Burnt timber remains under this were speculated by Blake and Lloyd as the site of Joseph of Arimathea's first church in Britain. Pegler locates anomalies in this area by dowsing, but does not speculate on the possibilities.

The author hints at the Abbey's potential links with the Holy Grail such as the mysterious talking statue of Christ which gets all but a brief mention, as does the 'MORVS' head, and a 13th Century copy of the Koran found 'bricked up' at the Abbey possibly brought back from the Holy Land by a crusading Knight Templar. The author raises the possibility that a number of grave slabs at Valle Crucis may identify Templar burials at the site.

The poet Guto'r Glyn spent his last days at Valle Crucis and refers to the Grail in an elegy to Robert Trevor (c.1452) in which he mentions a 'man buried at Egwestl with the Holy Grail'. Sometime after 1480 Guto'r composed a letter on behalf of the Abbot of Glyn Egwestl (Valle Crucis) requesting the loan of a copy of the 'Sain Greal' owned by Trahaearn ab leuan ap Meurig, a nobleman of Penrhos Fwrdios near Caerleon.

Almost certainly this text was the Welsh translation made in Glamorgan, c.1400, of two French Grail Romances of c.1300, La Queste del Saint Graal and Perlesvaus, now known as Y Seint Greal. A copy was made of it sometime after 1485 which bears a colophon stating it was made from a book owned by Trahaearn. Why was the Abbot of Valle Crucis desperate to get his hands on this Welsh Grail text?

Pegler weaves a web of many loose threads but fails to bring any of them to a conclusion; I really expected some revelation that he had discovered some anomaly under the Abbey turf during his dowsing, but instead he writes that there were one or two other dowsed features which he felt was more discrete to deliberately leave out of the book.

This tantalising little book barely scratches the surface of the mysteries of Valle Crucis Abbey; the full story is yet to be told.