The Spoils of War

“And they buried torques in the barrows, and jewels
and a trove of such things as trespassing men
had once dared to drag from the hoard
they let the ground keep that ancestral treasure
gold under gravel, gone to earth” [1]

On 23rd March 2010 it was announced that the £3.3 Million required to secure the Staffordshire Hoard for future display in the Mercian homeland had been reached three weeks ahead of schedule after a donation from the Government Heritage Fund. The first objects of the Hoard were uncovered in a field near Lichfield on 5th July 2009 leading to the largest collection of Anglo-Saxon gold ever found on UK soil. The Hoard, comprised of over 1600 items, containing five kilograms of gold, largely of martial items such as sword pommel caps, hilt plates and helmet cheek plates, notably deficient of feminine items, has been identified as 'battle booty' stripped from slain warriors as depicted in lines from the Anglo-Saxon poem Beowulf as promoted at local Hoard exhibitions recently:

“One warrior stripped the other,
looted Ongentheow’s iron mail coat,
his hard sword-hilt, his helmet too,
and carried the graith to King Hygelac” [2]

Throughout the poem the taking of spoils of war is shown to be regarded as legitimate booty and common practice amongst the Norse: recounting when Hygelac, King of the Geats, was killed in Friesland, Beowulf escaped across the sea, arriving on the shore, the poem describes the thirty battle shirts he had taken as: “the booty he had won”. 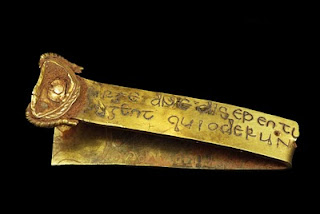 The date of the deposit of the Staffordshire Hoard has caused much speculation. A warlike, miss-spelt biblical inscription taken from the Book of Numbers: 'Rise up oh Lord, and may thy enemies be dispersed and those who hate thee be driven from thy face', similar to the one that runs around the Coppergate (or York) Helmet, found in 1982, but with a more martial sounding tone like a battle cry; broadly dated by the lettering style to between the seventh to ninth centuries. [3] The sword fittings hold similarities to finds at Sutton Hoo and are considered to be of a similar early seventh century date. However, expert opinion is not currently in complete agreement, but the most likely period the Hoard was buried appears to be between the mid to late seventh century, before the Viking Age in Britain. [4]

Perhaps the most stunning thing about the Staffordshire Hoard is the fine detail of the craftsmanship. The Saxon warriors must have been an elite group, adorned with intricate gold fittings on their war gear, and not simply recruited from the peasantry. There would appear to be a clear association between Dark Age centres of high social status and the production of fine metalwork; archaeology has uncovered copious evidence for such fine metalworking at Royal sites. The high skill levels required to manufacture such fine gold work would be expensive to retain with smiths acquiring legendary status in Celtic mythology. 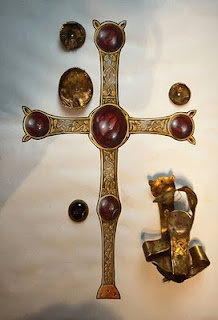 Although termed 'Mercian' gold, the precious metals are likely to have been stripped from slain warriors of the vanquished at the battle site, brought back into deepest Mercia and stashed on the high ground above Watling Street for safe keeping, probably to be melted down and reworked at a later date. The crumpled cross, robbed of its stone garnets, may have been in the possession of a defeated Christian army. For whatever reason the person who buried the Hoard never returned to claim his spoils. Maybe he fell at the next Mercian battle?

Among the intricately patterned objects of the Hoard images include creatures with the bodies of men and heads of wolves. Thought by some to be mythological beasts but these are considered more likely to be depictions of men wearing wolfskin masks and pelts, known as 'berserkers', an elite squad known to be attached to Norse warbands.

Berserkers are attested in numerous Old Norse sources which describe berserkers as Odin's special warriors, 'shock troops', who loot, plunder, and kill indiscriminately. The earliest depiction we find of of the beserks is in the Old Norse poem Hrafnsmal composed c.900 AD, in which they are described as the privileged warriors of King Harald Fairhair of Vestfold in Norway. They receive gifts from the king because of their fierce fighting qualities:

“Wolf-coats are they called, those who bear swords,
stained with blood in the battle,
They redden spears when they come to the slaughter,
acting together like one"

The 10th Century Byzantine historian and chronicler Leo the Deacon describes Scandinavian warriors fighting in Eastern Europe during the Viking Age dealing sword strokes in a state of madness, howling and roaring like wild beasts. It is considered that the name 'beserkr' may have originated from the wearing of a bearskin as proof of valour, taking the meaning as 'bear-shirt'. The bear and wolf were both seen as symbols of the valiant warrior, and the alternative name of 'wolf-coat' as depicted in the Hrafnsmal which portrays the wearing of a wolf pelt or a wolfskin belt. There was a popular Scandinavian tradition that men who turned into beasts at night would put on a belt made of wolfskin before they changed shape. [5] 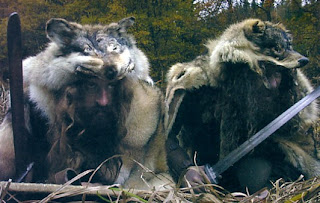 The Ynglinga saga is a legendary saga, originally written in Old Norse by the Icelandic poet Snorri Sturluson about 1225, based on an earlier 9th century account. The Ynglinga saga is the first part of Snorri's history of the ancient Norse kings, the Heimskringla. It tells the most ancient part of the story of the House of Ynglings (the Scylfings of Beowulf). Snorri tells how warriors howled and bayed like wolves and fought in groups like wolf packs. In battle, Odin, the Norse god of frenzy and ecstasy, was said to release them from fear and pain:

“His men went without their mailcoats and were as mad as hounds or wolves,
They bit their shields, and were strong as bears or bulls,
They slew men but neither fire nor iron had effect upon them.
This is called 'to run berserk' (berserkgangr)” [6]

Although the sagas portray the berserkr as a type of monster with supernatural powers, such elite warriors were an essential part of the fighting force, highly valued by Scandiniavian kings. The identification of wolves or bears with warriors is deeply rooted in various peoples of Indo-European descent and not unique to the Norse; these were professional warriors employed to gain dominion for their King and rewarded with the spoils of war, two thirds of which would be distributed amongst his warriors and one third retained. Stripping fallen warriors of their valuables was considered payment for services rendered and was common practice in the Dark Ages.