Swords, Stones and Digging for Camelot

Arthur: mythical hero, legendary king.
But was he, as the legends claimed, an actual Dark-Age Briton?
Might new discoveries and the latest theories finally reveal the real King Arthur?

Christopher Gidlow's second Arthurian book Revealing King Arthur has just been published (May 2010) by the History Press. Gidlow's earlier work The Reign of Arthur: From History to Legend (The History Press, 2004) discussed how a Dark Age historical figure became the substance of legend in the later sources such as the Mabinogi, Geoffrey of Monmouth and the Saints' Lives.

Howard Wiseman's Amazon.com review (January 2006) states that a shortcoming of The Reign of Arthur is that Gidlow does not directly address the recent arguments of Nick Higham in King Arthur: Myth Making and History (2002), in particular the claim that the description of Arthur in the 9th Century Historia Brittonum was not to be taken as in any way historical. Revealing King Arthur is Gidlow's attempt at redressing that issue.

From the inside front flap: “This book investigates how archaeologists have interpreted the evidence from Glastonbury and Tintagel to the supposed sites of Arthur's Camelot and his famous battles. For 800 years the controversy over Arthur's existence has ebbed and flowed. Rusty swords, imposing ruins, the Round Table, even Arthur's body itself were offered as proof that he had once reigned over Britain. The quest was revived by the scientific archaeologists of the 1960s. Just as Greek legends had led to the discovery of Troy, so might the romances lead to Camelot. This optimism did not last. Sceptics poured scorn on the obscure manuscripts and strong imagination on which the questers relied.” 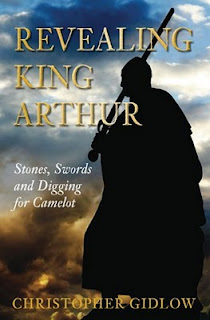 1.The Isle of Avalon
2.Ancient Books
3.Tintagel and the 'Arthur Stone'
4.The Ruler of Dumnonia
5.Camelot!
6.The Fall of Camelot
7.Kings of the Britons
8.Britain has Governors
9.The Saxon Invasions
10.Knights of the Round Table
11.Arthur's Twelve Battles
12.The City of the Legion
13.Inventing Arthur
14.Lost in the Woods
15.The Siege of Badon Hill
16.The Strife of Camlan
17.The Return of Arthur

Appendix -The Year of the Siege of Badon Hill

Gidlow discusses how archaeologists’ interpretation of their discoveries is influenced by the academic fashion of the time; sites which in the 1960s were used in the argument for King Arthur’s existence are now seen as irrelevant to the discussion of a completely mythical character. But by comparing the primary sources with the archaeological evidence he argues that the traditional image of Arthur leading the Britons in war against the Saxons around the year 500 AD is very plausible. 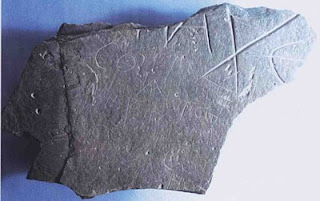 Gidlow tells how the discovery in 1998 at Tintagel of a mysterious slate was the headline he had waited for all his life. Inscribed with the name 'Artognou' the slate immediately became known as the 'Arthur Stone' promoted by English Heritage as the name 'Arthnou' possibly because it had more letters in common with the name Arthur. Consequently the early press releases at the time picked up on the connection prompting discussion in the national newspapers of the historical and literary merits of the myth of King Arthur. The Arthurian legend is big business in Tintagel but the name on the slate has nothing to do with Arthur and its association with the legend is typical of many armchair historical detectives who latch onto any similar sounding name with the three letters 'Art' and claim to have identified the real Arthur. Gidlow states that the archaeologists were keen to distance themselves from any connection with Arthur but concedes, rather disappointingly, that the name is not the same. On the archaeologists' refusal to participate in speculating on the Arthurian connection at Tintagel, he says “in the face of accumulating evidence from Tintagel supporting the traditional narratives 'one hardly dares to make such a suggestion for fear of what may be made of it in some circles' (quoting Oliver Padel in Hutton 2003: 56).”

And therein lies much of the theme of Revealing King Arthur in which Gidlow takes a swipe at scholarship of the last thirty years which has declared that the enigmatic Arthur should be banished from our history books altogether. Prime target is David Dumville, referred to as “Arthur's assassin” who in writing 'Sub-Roman Britain: History and Legend' (History 1977) scared the pants off most scholars of Dark Age Britain who have been afraid to mention Arthur ever since. You feel compelled to agree with Gidlow that most modern scholars do seem to be in awe of the man, held in reverence as the authority on Dark Age British history. Along with Dumville, Nick Higham, King Arthur: Mythmaking and History (2002) and Thomas Green, Concepts of Arthur (2007) are considered “anti-Arthurians” by the author and receive considerable attention throughout the book. Higham yes, but I would hardly term Green anti-Arthurian. Whereas Green does not advocate an historical Arthur he champions the existence of a mythological Arthur of early Welsh poetry, in which he is accompanied on his adventures by figures from Celtic mythology.

In accepting that a great deal of the Historia Brittonum's account of the fifth century “includes much that is clearly legendary, not to say mythological material”, Gidlow states that unfortunately it is attached to Ambrosius – NOT Arthur; “there is nothing in Historia Brittonum to make a modern reader think that Arthur is mythical and everything to make him suppose that Ambrosius is”.

The mythical section that Gidlow refers to is the tale of Emrys, also known as Ambrose, and the account of the dragons of Dinas Emrys. This Ambrose is the fatherless child who possesses the gift of prophecy and goes on to become Geoffrey of Monmouth's Merlin. He is clearly NOT the same Ambrosius who Gildas declared rallied the beleagured Britons in the fight against the Saxons and whose quarrel with Vitalinus resulted in the battle of Guoloph (Wallop) as recorded at the end of the Historia Brittonum.

Unfortunately for Gidlow, unequivocal mythical content of the Historia Brittonum is very clearly attached to Arthur; appended to some manuscript variants is the Mirabilia, or 'Wonders of Britain' listing a series of phenomena in the landscape, which according to Dumville were probably included in the earliest version. The Mirabilia contains two examples of Arthuriana amongst these wonders; firstly, is the mention of Carn Cafal, a heap of stones bearing the footprint of the warrior Arthur's dog when he hunted the Twrch Trwyth, the supernatural boar hunt recorded in what is considered possibly the oldest Arthurian tale, Culwch and Olwen. Secondly, the variable sized tomb of Amr, said to be the son of the warrior Arthur, near a spring, called Llygad Amr (Licat Anir), in the country called Ergyng (Ercing). Ambrosius is notably absent from the Mirabilia.

Gidlow is aware of the mythical content of the Mirabilia (pp.33 – 34) and returns to the site of the tomb of Amr later in the book (pp. 188 -189), which he proposes is 'Arthur Stone' , the site of a Neolithic long barrow, which he calls one of the very earliest Arthurian sites and the site of one of Arthur's battles where he killed his own son. However, here Gidlow confuses the cromlech of 'Arthur Stone' near Dorstone with the site of Amr's tomb, thought to be either the site of a lost neolithic barrow destroyed in 1896 at Wormelow Tump or nearby Gamber Head; the eye of the Gamber. The author seems unaware, or deliberately avoids, the large number of prehistoric sites with an Arthurian connection.

He states that the Arthur Stone is one of the few Arthurian sites presented to the public as such; of the 155 Arthurian sites covered in Fairbairn's survey, (A Traveller's Guide to Kingdom's of Arthur, 1983), Gidlows says the vast majority have not been investigated for their sub-Roman archaeology and have no on-site interpretation of their Arthurian associations. Wales, the region with the most, he continues, has no mention of Arthur at all on the CADW website and the English Heritage website only has four. Has Gidlow stumbled upon an Arthurian conspiracy theory?

This is an odd book which does little to support the case for an historical Arthur; for example the discussion of the renowned enigma of the Arthurian battle sites is unsurprisingly inconclusive making it difficult to envisage how the author intended to use that debate for an historical Arthur without firm evidence. Needless to say the sites of the Arthurian Battle list have been discussed by many scholars many times before and located, unconvincingly, all over the country. This is typical of the argument put forward throughout the book which provides nothing new and ultimately fails to reveal the existence of Arthur as an historical character.