The Shepherds Monument has been the centre of mystery for two hundred and fifty years. Now an historian claims to have solved the enigmatic inscription.

Enigmatic Inscription Solved?
Carved on the 18th-century Shepherd's Monument in the grounds of Shugborough Hall in Staffordshire, England, the ancestral home of the Earls of Lichfield, is the mysterious sequence of letters - O U O S V A V V, followed on the next line by the letters D and M. The inscription which has so far defied attempts to decipher it, appears below a mirror image of Nicolas Poussin's famous painting, The Shepherds of Arcadia. 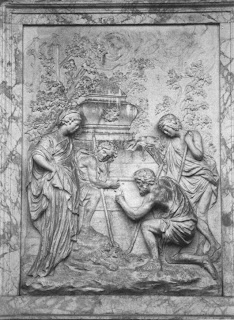 Theories abound to the meaning of the enigmatic code which has defied a satisfactory explanation for two hundred and fifty years; attempts have been made since the 19th century, among them the great Victorians Dickens and Darwin. In 2004 a team of former code-breakers from Bletchley Park, Britain's famous main decryption establishment of World War II, failed to make a positive decipherment. The code-breakers revealed that they believe the cipher is a message from the Priory of Sion, which is likely to stand for "Jesus (As Deity) Defy", interpreted as belief that Jesus was an earthly prophet, not a divinity. Another of the Bletchley code-breakers suggested it was simply a love poem; "Optima Uxoris Optima Sororis Viduus Amantissimus Vovit Virtutibus", which translates as "Best wife, Best sister, Widower most loving vows virtuously", a phrase first suggested by archivist Morchard Bishop in letters to Margaret, Countess of Lichfield in the early 1950's. However they admitted that you need more than ten letters to break a code; consequently the inscription retains its secret.

Debate continues as to whether the Priory of Sion was invented as a 20th century hoax or has a genuine provenance in the 11th century as guardians of a secret bloodline of the Merovingian dynasty in France. In the controversial book “The Holy Blood and the Holy Grail” (1982), the authors Michael Baigent, Richard Leigh, and Henry Lincoln, perpetuated this theory, claiming that The Knights Templar, an order which captured Jerusalem during the Crusades, was the military branch of the Priory of Sion and they were both fronts of the same organisation.

The Knights Templar, or to give them their full title, The Poor Fellow-Soldiers of Christ and of the Temple of Solomon, were thought to be guardians of relics recovered from the Holy Land during the early Crusades, including the Holy Grail, the cup used by Jesus at the Last Supper. The secret society of the Priory of Sion succeeded the medieval Knights Templar, and were known as the keepers of the Holy Grail. This was subsequently claimed as fact in the preface of Dan Brown's bestselling novel “The Da Vinci Code” (2003).

The Grail was first introduced to medieval Arthurian romance by Chretien de Troyes in the late 12th century as a "graal" a serving dish or platter. It can be no coincidence that de Troyes composed his tale around the same time as the crusades were taking place and dedicated “ The Story of the Grail, or Perceval” to his patron and crusader, Philip, Count of Flanders. The French Cistercian Abbot Bernard of Clairvaux officiated at the Council of Troyes at which he traced the outlines of the Rule of the Knights Templar, who soon became the ideal of Christian nobility. Originally buried at Clairvaux Abbey, Bernard's remains were later moved to Troyes Cathedral.

Chretien de Troyes would appear to have had access to first hand information from the Crusader Knights and evidently his Arthurian tales contain much pagan material, infused with earlier Celtic themes. It was not until Robert de Boron, wrote his "Joseph d'Arimathie", and continued in the Vulgate's "Estoire del Saint Graal," that Chretien's "graal" was Christianised and transformed into "The Holy Grail" the vessel of the Last Supper.

To others, the concept of the Holy Grail as a bloodline descended from Jesus Christ persisted. In the The Holy Blood and the Holy Grail, Baigent, Leigh, and Lincoln, proposed the theory that Christ had staged his crucifixion, married Mary Magdalene and eventually sired the Merovingian dynasty. The book also claimed that Nicolas Poussin was a member of the the Priory of Sion, and suggested that his painting, The Shepherds of Arcadia, contains hidden meanings of great esoteric significance. 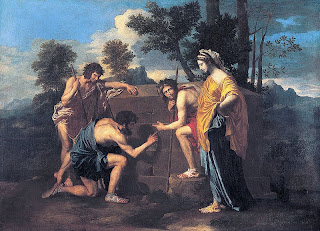 Interest in the Shepherd's Monument and its inscription exploded following Dan Brown's 2003 novel The Da Vinci Code, featuring the Priory of Sion at the centre of a conspiracy to cover up the Christ bloodline and loaded with esoteric symbolism. The Da Vinci Code finally led to the tomb of Mary Magdalene, the wife of Jesus, her womb depicted by Brown as the receptacle of the Holy Grail, the Christ bloodline, buried beneath the Rose Line in Paris. Many believe the Shepherd's Monument inscription, if deciphered, would reveal the location of the tomb of Jesus.

Shugborough Inscription Solved?
Recently, the Staffordshire Newsletter carried a small article on the 3rd February 2011, stating that an historian had solved the 250 year old riddle of the O.U.O.S.V.A.V.V. & D.M inscription on the Shepherd's Monument at Shugborough, claiming it has nothing to do with the Holy Grail and is nothing more than 18th century graffiti.

Historian A J Morton claims the letters were probably created in memorial of Viscount Anson and his mother Mary Vernon-Venables. Morton said: "Those seeking Grails and other trinkets are going to be disappointed. More than half the letters (S,V,A,V,V and M) match precisely the initials of Viscount Anson of Shugborough (1767 1818) and those of his mother Mary Venables-Vernon. Mary was the resident of Shugborough in 1773." He added, "It's as simple as that. Family initials on a private memorial."

The story appeared in several press reports, the Telegraph reported that Mr Morton discovered that Anson's wife was the daughter of the 1st Baron Vernon and sister of Edward Vernon-Harcourt, an Archbishop of York. Their son, Thomas Anson, was made Viscount Anson of Shugborough in 1806.

Mr Morton said: "I've tried convincing myself that I'm wrong, but I can't see any way out. While I'm pleased to have solved it, I do worry that I've destroyed something magical."

He added: "The Grail has brought the estate some much-needed attention and, I imagine, a certain amount of financial relief. But unless they can provide a more convincing solution, I'm afraid the Grail story may have run out of steam."

However, many do not share Mr Morton's confidence in having claimed to have solved the mystery of the Shepherd's Monument inscription, pointing out that his interpretation is just a jumbled mess of letters pulled from any place having an association with the Anson family and hardly fall into the correct order as the Shugborough monument inscription.

A spokesman for Shugborough said: "We get five or six people a week who believe they have solved the code so we are a bit wary now."

The Inscription
Perhaps the most convincing explanation is often the simplest; the letters O.U.O.S.V.A.V.V. is the Latin translation of Ecclesiastes 12:8, ORATOR UT OMNIA SUNT VANITAS AIT VANITAS VANITATUM, which reads; "Vanity of vanities, saith the preacher, all is vanity" .

This explanation tends to agree with an earlier monument at Hagley Park, Worcestershire,which was inscribed "OMNIA VANITAS" taken from the Vulgate version of the verse which is "Vanitas vanitatum dixit Ecclesiastes omnia vanitas".

"Mr Lyttelton has built a kind of alcove in his park, inscribed "Sedes Contemplationis" near his hermitage. Under the aforesaid inscription is 'OMNIA VANITAS'."

Thomas Anson is known to have visited Hagley Park in the 1750's.

The letters D and M on the line below is considered an abbreviation of the Latin Diis Manibus, “dedicated to the shades” a common inscription on Roman tombstones and monuments where “shades” was typically a term for “spirits of the dead". It is known that there were authentic Roman funerary stones at Shugborough.

Of all the explanations offered for the inscription on the Shepherd's Monument at Shugborough this is the simplest and considered to perfectly reflect the message of Poussin's painting.