“I carry a head in the grasp of my hand
of a generous lord – he used to lead a country.
The chief support of Britain has been carried off

I carry a head which cared for me.
I know it is not for my good.
Alas, my hand, it performed harshly.

I carry a head from the side of the hill
and on his lips is a fine foam
of blood. Woe to Rheged because of this day.

It has wrenched my arm, it has crushed my ribs,
it has broken my heart
I carry a head which cared for me.”

Welsh saga poetry is said to have its roots in Dark Age Northern Britain, 400 – 700 AD. The 9th century Historia Brittonum (History of the Britons) records the bards of the time Taliesin and Aneirin amongst others who's work has not survived:

“Then Dutgirn at that time fought bravely against the nation of the Angles. At that time, Talhaiarn Cataguen was famed for poetry, and Neirin, and Taliesin and Bluchbard, and Cian, who is called Guenith Guaut, were all famous at the same time in British poetry.”

This era is known as the period of Y Cynfeirdd (literally "The earliest poets"), their poetry celebrating their patrons and praising their valiant efforts in battle. We know of Taliesin's works from the 6th century praise poems to Urien of Rheged and Aneirin's Y Gododdin, the moving poem recounting the disastrous British attack on Catraeth, the most archaic version of the poem John Koch has dated to the 6th century.

This style, personified by Aneirin and Taliesin, was continued by a number of anonymous poets all writing in the same tradition; from the 9th century we find the saga poetry of Llywarch Hen which laments those who have fought and fallen in battle. 'Llywarch Hen' (Llywarch the Old) was a 6th century prince, and cousin to Urien, from the ruling family in the 'Hen Ogledd' (Old North) of the northern British kingdom of Rheged, comprising of territory from parts of modern southern Scotland. In his later years Llywarch, now an old man, has also been transferred from his northern British background to Wales in the context of the incessant border skirmishes with the English. The early Welsh poems attributed to Llywarch Hen have come to be known as saga englynion.

Welsh Saga Poetry
Early Welsh saga "Englynion", are lyric poems long presumed to be the poetic remains of lost stories, told in a mixture of prose and verse.

Englynion (singular: englyn) are the oldest recorded Welsh metrical form, short form poems that consist of three or four lines stanzas, dating from as early as the 9th century. Each englyn has a complex structure, for example involving rhymes or half rhymes, and a certain number of syllables per line and other variants.

The englyn is the only early stanzaic metre in Welsh. The origins of the metre have defied attempts to be traced but is thought to have been in existence since at least the 8th century. The main period of floruit for the three-line types is the 9th and 10th centuries; by the 11th century the higher classes of poets, the bards, had adopted four-line variants of the earlier types, and the three-line types were used only by the lesser, more popular poets. The englyn is used for a wide range of subjects in the early period: religious verse, gnomic poetry, prophecy and antiquarian works. The main bardic genre, praise poetry, is not attested for the early period.

But by far the most extensive and important body of englynion poetry are the lyric poems in character termed “englynion chedlonol” or “saga englynion”.

The Songs of Llywarch the Old
The collective early Welsh saga englynion known as Canu Llywarch Hen, Canu Heledd and Canu Urien are considered to be part of a cycle concerning the figures whose stories they tell. Their subject is mainly the characters and events of the 6th and 7th centuries, during the long years of warfare with the Anglo-Saxon invaders. These three main cycles, or groups of poems, refer to material concerning Llywarch Hen, Heledd and those dealing with the death of Urien Rheged.

In the poems concerning Llywarch Hen, (Canu Llywarch Hen) his life was the subject of a presumed lost saga of which only a series of englynion, survives. Llywarch flees to Powys, his new homeland often associated with Llanfor, near Llyn Tegid in Gwynedd. Canu Llywarch Hen recalls the loss of all twenty-four sons of Llywarch Hen, in battle against the English.

The Canu Heledd recalls the fall of the kings of the Pengwern region (modern Shrewsbury, Shropshire) and the elegy Geraint son of Erbin, concerning the Battle of Llongborth, are also associated indirectly with Llywarch. The "Heledd Cycle" laments the death of Cynddylan, prince of Powys in the 7th century, his lands devastated by the English of Mercia. Scholars argue that the 9th century poems do not deal with historical events, indeed there is no account of Cynddylan outside of Welsh poetry, but reflect the background of the border conflict. Heledd, sister of Cynddylan, is the lone survivor in this cycle, in which she laments the loss of Cynddylan's great hall, formerly filled with life, but now ruined and empty.

Included here is the "The Death-song of Cynddylan" (Marwnad Cynddylan), which is thought to be older than the 10th century Canu Heledd, likely composed in East Powys not long after Cynddylan's death in 655 AD.

“The Death of Urien”, the third in the cycle, is the most obscure of the three, composed sometime after the assassination of the 6th century British leader of Rheged. Llywarch, here in his native north Britain, appears as the narrator, where in one poem he returns to Rheged with the British leader's severed head; whether Llywarch murdered Urien himself or retrieved his head to prevent the enemy obtaining it as a trophy has been the subject of considerable debate. The Historia Brittonum recalls how Urien was killed by one of his own people:

“Hussa reigned seven years. Against him fought four kings, Urien, and Ryderthen, and Guallauc, and Morcant. Theodoric fought bravely, together with his sons, against that Urien. But at that time sometimes the enemy and sometimes our countrymen were defeated, and he shut them up three days and three nights in the island of Metcaut; and whilst he was on an expedition he was murdered, at the instance of Morcant, out of envy, because he possessed so much superiority over all the kings in military science.”

Welsh Scholarship
Most of the saga englynion were first published in 1792 by William Owen. At the time Llywarch was considered to be the composer of the englynion, not a character in some of the verse. The early works were considered unsound due to the infancy of Welsh scholarship. The texts from the Red Book of Hergest englynion and Black Book of Carmarthen poems in The Myvyrian Archaeology of Wales (1801-7) were considered little better. Skene's The Four Ancient Books of Wales (1868) were translations commissioned from Welsh clergymen of the time who had no training in the older language and considered unreliable at best. In the 1900's J Gwenogvryn Evans produced diplomatic editions of The Black Book of Carmarthen (1906) and The Poetry in the Book of Hergest (1911) which are invaluable for the modern scholar of Welsh Literature.

Modern Welsh scholarship begins with the works of Sir John Rhys and Sir John Morris-Jones. However, it was their pupil Sir Ifor Williams who produced editions and elucidations of the early poetry of Wales. Williams presented an outline of his theories in his British Academy Lecture of 1932 `The Poems of Llywarch Hen' which demonstrated that this cycle of poems dated from the 9th century based primarily on historical grounds.

Soon after, Williams produced 'Canu Llywarch Hen' (University of Wales Press, 1935), containing poems relating to the figures of Llywarch Hen, Heledd and Urien Rheged, their background being the wars between the Cymry and the English in the 6th and 7th centuries, in Powys and on the Shropshire border; but also including memories of warfare in the `Old North', which covered much of southern Scotland, and northern England. Williams showed that, contrary to earlier assumption, Llywarch Hen is not the name of the anonymous poet who composed these dramatic poems, but rather that of a leading actor in them, an ancient warrior, relocated in Powys, portrayed as a senile figure, goading his sons to go out and fight in defence of their borderland, as he himself is no longer able to do so, then lamenting their loss.

Patrick Ford produced the first work to present an entire cycle to an English audience in 'The Poetry of Llywarch Hen' (1974). Ford's work is not an edition and denies any sort of narrative framework for the poems.

Jenny Rowland produced the first full edition of the saga englynion since Sir Ifor Williams's Canu Llywarch Hen appeared in Welsh. Rowland's work was first submitted as a PhD thesis to the University of Wales in 1982. Rowland's work, based primarily on the Red Book texts, was published by as Early Welsh Saga Poetry: A Study & Edition of the Englynion (D S Brewer, 1990) containing full English translations, narrative and notes making the work accessible to a wider English audience. Long out of print, and virtually impossible to obtain a copy second-hand, Rowland's opus is now available again as a “print-on-demand” service directly from the publisher's website.

Rowland's critical discussion of the saga "englynion" seeks to restore the lost narrative background by careful reading of internal indications and by comparative study. The growth, nature and artistry of each cycle is fully explored, as well as how each relates to the larger corpus. Relevant early Welsh traditions and history are also cited and the broader questions of what was the nature of the original prose setting, the metrical principles and practice, and their relationship to the Old English elegies are also covered. 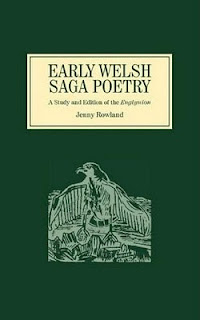 This major “print on demand” programme ensures specialist, rare and difficult to find books such as Gildas: New Approaches edited by David Dumville and Michael Lapidge, and Saint Germanus of Auxerre and the End of Roman Britain by E A Thompson, are available once more. Essential reading for students of Medieval Welsh literature and Dark Age Britain.