New research led by the University of Reading has revealed that finds at Glastonbury Abbey provide the earliest archaeological evidence of glass-making in Britain.

Excavations at Glastonbury Abbey began in 1907 following the purchase of the site by the Church of England. Since then, 34 seasons of excavations up to 1979 exposed most of the plan of the medieval church and evidence of earlier phases of the monastery, yet to date very little of this evidence has been published.

Ralegh Radford, the Director of excavations 1951 from to 1964, published an interim report in 1981 which suggested a series of churches, a Saxon enclosure ditch, potentially the earliest cloister in Britain, and craft-working activities including unique glass furnaces.

Attempts at full publication were not possible until after Radford's death in 1999 when his excavation archive was placed in the care of the National Monuments Record at Swindon, making the publication of a full report possible for the first time. Consequently, the Glastonbury Abbey Excavation Archive Project was launched to study the records of the archaeological excavations now available in an attempt to unravel some of the mystery of the Abbey. 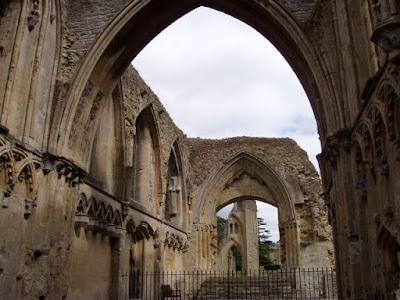 The project is a collaboration between the Abbey and the Archaeology Department at the University of Reading, funded by the Arts and Humanities Research Council. The research is being led by Professor Roberta Gilchrist and Dr Cheryl Allum from the University of Reading working closely with Janet Bell and John Allan, the Curator, and Consultant Archaeologist of Glastonbury Abbey, respectively.

The archive shows that during the 1955-57 excavations at Glastonbury Abbey glass residues and fragments of clay crucibles were recovered which was interpreted as three, or perhaps four, 9th-10th century glass furnaces that were destroyed during the pre-Conquest construction of the Abbey cloister. Some doubts remain as to whether the entire glass working site was excavated.

On re-examination of the excavation records Professor Gilchrist has determined that the finds at Glastonbury Abbey provide the earliest archaeological evidence of glass-making in Britain. Radiocarbon dating has revealed that the furnaces date approximately to the late 7th century and are likely to be associated with a major rebuilding program at the Abbey under the direction of King Ine of Wessex around 680 AD. Historical documents record glass-making at York and Wearmouth in the 670s but Glastonbury provides the earliest and most substantial archaeological evidence for glass-making in Saxon Britain.

This new research has identified the remains of five furnaces together with fragments of clay crucibles and glass for window glazing and drinking vessels, mainly of vivid blue-green colour. The glass is yet to be analysed chemically to provide further information on the sourcing and processing of materials but it is thought likely that specialist glassworkers were brought in from across the channel in France to work at Glastonbury.

Professor Gilchrist, who  is to publish the full archive of excavations, said: "Glastonbury Abbey is a site of international historical importance but until now the excavations have remained unpublished. The research project reveals new evidence for the early date of the monastery at Glastonbury and charts its development over one thousand years, from the 6th century to its dissolution in the 16th century."

The story of the Abbey's pioneering role in medieval crafts and technology is currently being shown in an exhibition at Glastonbury Abbey Museum, ‘From Fire & Earth' until 16 September 2012.