A new book by Thomas Green, due publication in September, argues that British political control in the Lincoln region survived into the sixth century. 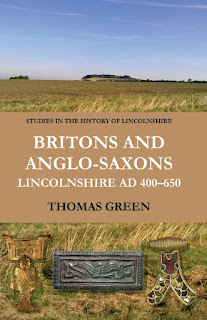 Offering an interdisciplinary approach to the study of Dark Age Lincolnshire during the period between c. 400 and 650 AD, reviewing not only the archaeological evidence, but also the availabe historical, literary and linguistic information for the period. Green argues that by using all of this material together, significant advances can be made in our understanding of events during this period, particularly Anglian-British interaction. When taken together, this evidence suggests that a British polity named *Lindēs was based at Lincoln into the sixth century, going on to have an intimate connection to the seventh-century Anglo-Saxon kingdom of Lindsey (Old English Lindissi).

A British Polity in the Lincoln Region
The main focus of Britons and Anglo-Saxons is on the post-Roman period, and specifically tackles the question of Anglian-British interaction in eastern Britain. Green argues that there is now a significant body of evidence to suggest that the former Late Roman provincial capital of Lincoln retained its centrality into the post-Roman period, becoming the focus of a British polity known as *Lindēs which probably survived up to the fifth century and at least into the sixth. A large quantity of British high-status metalwork is known from fifth- to sixth-century Lincolnshire and during the same period the old Roman forum at Lincoln appears to have been used by the British as a Christian church. Significantly, this fifth- to sixth-century British polity appears to have been able to control the Anglo-Saxon immigrants arriving in its territory, up until the early sixth century and eventually succumbing to Anglo-Saxon control, the region became the seventh-century kingdom of Lindissi (the name derived from *Lindēs).

The Origins of Lindisfarne and the Kingdom of Bernicia
Britons and Anglo-Saxons claims to provide a detailed analysis of the nature of the Anglo-Saxon population-groups that were present in the Lincoln region from the mid-fifth century onwards, including those of *Lindēs-Lindissi and also groups further south, such as the Spalde/Spaldingas. Arguing that the emerging picture of Anglian-British interaction, if repeated throughout the Anglo-Saxon regions would have a significant bearing on the origins of Anglo-Saxon kingdoms, the nature and extent in the core areas of Anglo-Saxon immigration, and the conquest and settlement of Northumbria.

Green presents the case for the island of Lindisfarne being originally settled by Anglo-Saxon migrants from Lincolnshire, which he argues provides the most credible interpretation of the etymology for the name of the Northumbrian island as the Lindisfaran were a major Anglo-Saxon population-group based in the Lincoln region. Further, he suggest that that the arrival of the Lindisfaran could be identical with the arrival of the founders of the kingdom of Bernicia.

Table of Contents:
Foreword: Dr Kevin Leahy (The Anglo-Saxon Kingdom of Lindsey, 2008) acknowledges Green's latest monograph as breaking new ground, presenting a new approach to the history of the Lincoln region in the post-Roman period.
Introduction:  Previous Approaches, Sources and Methodology
Chapter 1  The Context of Post-Roman Lincolnshire
Chapter 2  The British Country of *Lindēs
Chapter 3  Anglian-British Interaction and the End of the ‘Country of *Lindēs’
Chapter 4  Lindissi and the Legacy of *Lindēs
Chapter 5  The Population-Groups of Early Anglo-Saxon Lincolnshire
Chapter 6  Lindisfarne, the Lindisfaran, and the Origins of Anglo-Saxon Northumbria
Conclusion  The Significance of *Lindēs and Lindissi

"This volume breaks new ground. It offers an interdisciplinary approach to the history of the Lincoln region in the post-Roman period, drawing together a wide range of sources. In particular, it indicates that a British polity named Lindes was based at Lincoln into the sixth century, and that the seventh-century Anglo-Saxon kingdom of Lindsey had an intimate connection to this British political unit." - Society for Lincolnshire History and Archaeology

Dr Thomas Green lives in Lincolnshire and is currently undertaking research at the University of Oxford, where he recently completed his doctoral thesis. He maintains the Arthuriana website specialising in studies in early Medieval history and legend. Much of the Arthurian material from the website is available as Arthuriana: Early Arthurian Tradition and the Origins of the Legend as a print-on-demand book or a PDF download. Much of this material formed the basis of his book Concepts of Arthur: the Nature of the Early Arthurian Legend (Tempus, 2008), both essential reading for students of  the early Arthurian legend.


See: ‘The British Kingdom of Lindsey’ by Thomas Green, a detailed study of the historical, archaeological, literary and linguistic evidence for a post-Roman British kingdom in the Lincoln region. [A version of the paper that originally appeared in Cambrian Medieval Celtic Studies, 56 (2008), pp.1–43]