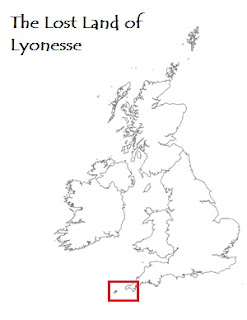 “So all day long the noise of battle rolled
Among the mountains by the winter sea;
Until King Arthur’s Table, man by man,
Had fallen in Lyonnesse about their lord,
King Arthur.  Then, because his wound was deep,
And bore him to a chapel nigh the field,
A broken chancel with a broken cross,
That stood on a dark strait of barren land:
On one side lay the Ocean, and on one
Lay a great water, and the moon was full.” 1

Lyonesse
The search for the site of Arthur's final battle where he fell mortally wounded at Camlann has defied identification; candidates have been proposed from the length and breadth of the country. Lord Tennyson seems to be in no doubt and in his Arthurian epic “Idylls of the King" places the final battle between Mordred and the King at Lyonesse.

Tennyson has Arthur roving the trackless realms of Lyonnesse long before they crowned him King and refers to the 'sad sea-sounding wastes' and 'lonely coast' of Lyonnesse.

We cannot be certain of Tennyson's inspiration in identifying Lyonesse as the scene of Arthur's final battle against Modred but he was clearly aware of the legend of a land off the coast of Cornwall, connecting Penwith with the Scillies; The Land of Lyonesse, stretching some eighteen miles west of Land's End and eight miles north-east of the Isles of Scilly with a watchtower at the most westerly point to guide seafarers.

Following Arthurian tradition Tennyson’s Lyonesse was the realm of Tristan, or Tristram as he became known by English writers, one of the main characters of the greatest legends of Cornwall, the story of Tristan and Iseult, a Cornish hero and one of the Knights of the Round Table. Thomas Malory has the Lady of Lionesse play a significant role in his tales of Arthur and mentions Surluse as part of the kingdom of Lyonesse where Sir Galahad was ruler under Arthur. 2

However, although the tales of Tristan are firmly placed in Cornish tradition there were two other places with variations of the name Lyonesse as Leonais: one in Brittany, and the other seemingly from the French name for Lothian in Scotland. Arthurian romancers may have confusingly called this land off the coast of Cornwall 'Lyonesse,' following the Breton tradition, but the Cornish name for this stretch of land between Land's End and the Scillies was 'Lethowstow'.

On the flats between the small Isles of Scilly are the remains of field walls, now under the sea, evidence of division of the land before it was submerged. Further evidence of man's presence before the inundation is found in an Early Iron Age hut found below the high-water mark on St Martins and pottery from the 3rd and 4th centuries and a Roman bronze brooch from a stone grave found below normal high tides on Old Man. Environmental evidence shows that as late as Roman times the area between the Isles of Scilly was dry land and just one island, a single large, wooded isle which could be walked to at low tide. A Roman writer records a heretic who was banished to Sylina Insula, the island of Scilly, in 387 AD.

The confusion of the location of Lyonesse/ Lethowstow, as the antiquarian, William Camden records, seems to exists because Cornish people during the 16th century referred to the Seven Stones reef off Land's End as the City of Lions, the reputed site of the capital of the legendary kingdom, confused with the Breton town Leonais, probably the region around the coastal town of Saint-Pol-de-Léon, and this form is the probable source of Malory’s Lionnesse. The Seven Stone rocks are held to be the remains of the city where local fishermen have dragged up domestic items in their nets, still calling the Seven Sisters the 'The Town.' 3 Today this reef remains a navigational hazard for shipping and has caused as many as 200 shipwrecks.

In later traditions Lyonesse is said to have sunk beneath the waves some time after the Tristan stories take place. A persistent legend claims that the Isles of Scilly are all that remain of the fabled land of Lyonesse. However, we find no references in medieval Arthurian legend to the sinking of Lyonesse.

The story goes that a devastating storm swept in to the south west driving the marauding sea over Lyonesse, drowning the luckless inhabitants and submerging the kingdom beneath the waves, until all that remained in view were the higher ground to the west, known to us now as the Isles of Scilly. Legend claims that only one man, Trevilian survived, and he rode a white horse up to high ground at Perranuthnoe before the waves could engulf him. It is said that his ancestry lives on in the Cornish Trevelyan family, whose coat of arms bears a horse issuing out of the sea.

Elizabethan antiquaries collected reports current in the 16th  century stating that Lethowstow contained 'fair-sized towns and 140 churches' and was suddenly engulfed by the sea. They also claimed that one could hear the bells of the drowned city ringing out during rough seas. Today the remains of field boundaries show up at low tide along the sands of the Sampson Flats between the isles of Tresco and Sampson in the Scilly Isles.

Stanley Baron, a journalist from the News Chronicle who was residing in Cornwall during the 1930's, was awoken during the night by the muffled ringing of bells and was told by his hosts that he had heard the bells of Lyonesse.  Edith Oliver, the former mayor of Wilton, claimed she had twice seen towers, domes, spires and battlements beneath the waves whilst standing on the cliffs at Land's End.

What Lies Beneath
Perhaps much of this can be dismissed as fantasy?
Yet, there is evidence of a drowned forest on the Cornish coast with tree stumps sticking out into the sea at Mount's Bay suggesting the sea levels were once much lower. Furthermore, the old Cornish name for St Michaels Mount is 'Carrack Looz en Cooz' which translates as 'The grey rock in the wood'. Archaeological evidence indicates that Mount's Bay was the source of a prehistoric axe material. We have clear evidence of a submerged land in the south-west England within historical times. 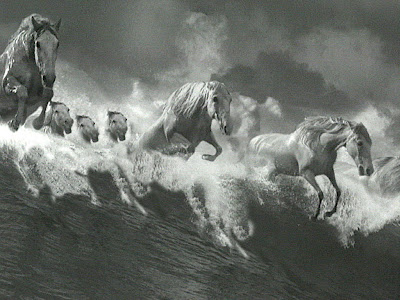 Inundation legends are found in many other parts of north-western Europe, not least in Celtic lands.

Gerald of Wales claimed there was a drowned city beneath the waters of  Llangorse Lake in the Brecon Beacons, Mid Wales. On the North coast of Wales near Llandudno was Llys Helig, the palace of Prince Helig ap Glanawg; it is said the ruins can still be seen at very low tides. Off the North-West coast of Wales in Caernafon Bay there is a cluster of rocks, a reef known as Caer Aranrhod, named after the mother of Lleu Llaw Gyffes from the Fourth Branch of the Mabinogion. Charlotte Guest in her notes to the Mabinogion, states that, "There is a tradition that an ancient British town, situated near this place, called Caer Arianrhod, was swallowed up by the sea, the ruins of which, it is said, are still visible during neap tides, and in fine weather."

Tree stumps can be seen leading out into the sea at low tide in Cardigan Bay, Wales, the mythical site of Cantre'r Gwaelod (The Bottom Cantred).

But the nearest legend to Lyonesse is the tale of the mythical Breton city of Kêr-Is which was built on the coast of Brittany in a then-dry location off the current coast of the Bay of Douarnenez. Over time the Breton coast had slowly given way to the sea and it now threatened Kêr-Is. To protect the city from inundation, a dike was built with a gate that was opened for ships during low tide. The one key that opened the gate was held by King Gradlon.

But the gate was left open during a storm and at high tide a massive wave crashed down on Kêr-Is and the city was swallowed by the incoming waters. King Gradlon escaped on Morvarc'h, his magical horse.  Which is all remarkably similar to the tale of Lyonesse and Trevilian who escaped on his horse and perhaps the inspiration behind the Cornish story.

In addition to describing Lyonesse as the site of the final battle between Arthur and Mordred, Tennyson's Idylls of the King also claim the lost land is the final resting place of  King Arthur himself. Perhaps this is why the grave of the King cannot be found – it lies beneath the sea.