Merlin and Stonehenge: The Royal Cemetery

In the 12th Century Geoffrey of Monmouth claimed  that the Giant's Dance was erected at the Cloisters of Ambrius as a memorial to British Nobles slaughtered by the Saxons.

A Monument to the British Nobles
In his 'Historia Regium Britanniae'  (History of the Kings of Britain) c.1136, Geoffrey of Monmouth claims that the Giant's Dance (Stonehenge) was erected as a monument to 460 unarmed British nobles treacherously murdered by Hengist's Saxons as a peace conference. Had Geoffrey invented the whole story or was he following an ancient tradition?

According to Geoffrey the British Nobles lay buried at the monastery near Kaercaradoc, now Salisbury. At this place was a convent situated near the mount of Ambrius, the Cloisters of Ambrius. To perpetuate the memory of that piece of ground, which was honoured with so many noble patriots that died for their country, Aurelius Ambrosius, the king, sent for Merlin, the 'prophet of Vortigern'. After passing through several provinces, they found him in the country of the Gewisseans, at the fountain of Galabes, which he frequently resorted to. Merlin said they should send for the Giant's Dance in Ireland if they wanted a fitting monument of vast magnitude and wonderful quality, that if placed here as there it would stand for ever.11

After Merlin took the Giant's Dance to Britain, the Irish, under king Gillomanius, came for the stone circle and landed at the city of Menevia (St Davids, Pembrokeshire, south-west Wales). The British forces, under Utherpendragon, engaged in battle with them while king Aurelius lay sick at Winchester. One of the Saxons, named Eopa, disguised as a monk, went to Winchester and promised to restore the king to health if he would but take his potions. The king took the potions which secretly contained poison and fell asleep, dying shortly after. He was buried within the Giant's Dance near the Cloisters of Ambrius.12

Later in Geoffrey's story of the Saxon wars, after a victorious battle against the Saxons under command of Octa and Eosa, Uther and one hundred of his men died suddenly after drinking water from the well poisoned by the Saxons at Verulam (the Roman city of Verulamium, now St Albans). Uther's body was carried to the Cloisters of Ambrius where they buried it close by Aurelius, within the Giant's Dance.13

We can be certain Geoffrey means Stonehenge for the Giant's Dance as he states later that Constantine is buried close by Uther within the structure of stones which was set up with wonderful art not far from Salisbury, called in the English tongue 'Stonehenge.'14

Stonehenge Cemetery
Geoffrey of Monmouth seemed to be aware that Stonehenge was a cemetery as he has three British Dark Age kings buried there within the monument. He was also probably aware of the large number of barrows on Salisbury Plain, although there is nothing in his works to suggest he ever visited the monument. The ancient funerary custom of north-western European peoples of placing the dead in mounds is known from the Neolithic long barrows, into the Bronze Age round barrows and persisted into the late Halstatt culture of the Iron Age as attested by the 'Chieftains Grave' at Hochdorf, dating to 530 BC. To the Celtic peoples, perhaps when they had forgotten their original purpose as a sepulchre, considered the mounds to be the home of faery and the entrance to the Otherworld. In Gaelic mythology the 'Sidhe' are the people of the earthen mounds, believed to be a supernatural race; such as the last of the Tuatha Dé Danann, Children of the goddess Danu, who retreated into the Otherworld after they were defeated by the Milesians. Much later, the Anglo-Saxons in England respected these ancient tumuli; during the 5th and early 8th centuries AD they buried their dead around ancient barrows, sometimes as secondary internments in the higher levels of the mound.15

Stonehenge sits at the centre of a vast necropolis a mile wide and some six miles long. Standing at the stone circle on Salisbury Plain it is immediately noticeable that the surrounding skyline is crested with Early Bronze Age round barrows; a prehistoric cathedral in the middle of a huge graveyard. Significantly, one of the greatest concentrations of round barrows in Britain was built in the area around Stonehenge. A number of important barrow groups appear to have been deliberately located to be visible from Stonehenge itself, such as those on King Barrow Ridge, The Cursus Barrows and the Normanton Down cemetery.

Whereas Neolithic people had used long barrows for communal burials, the Bronze Age placed more emphasis on the individual rather than the community; initially one individual was buried per round barrow. By a remarkable coincidence, the number of barrows within a mile or so of Stonehenge has for long been estimated at around 300; but the addition of those destroyed and those discovered from air photographs increases the number to around 460, remarkably, exactly the number of murdered nobles according to Geoffrey. These barrows would probably almost all have been visible in Geoffrey's time.16

However, most of these Bronze Age barrows were constructed sometime after the erection of the huge lintel-topped sarsen stones, c.2,500 BC, and major construction work at Stonehenge had finished, the monument was obviously still regarded as an important centre for society and religious belief, with later generations respecting the ancient sanctity of the monument. Yet, significantly Geoffrey has Aurelius, Uther and Constantine buried within the Giant's Dance. In Geoffrey's time he cannot have possibly been aware of any burials inside the circle of the ditch and bank of the monument. However, recent archaeological work has confirmed this is indeed the case.

New archaeological evidence found by the Stonehenge Riverside Project indicates that Stonehenge served as a burial ground from its earliest beginnings; the site started life in the early third millennium BC as a cremation cemetery within a circle of upright bluestones. The latest evidence indicates that cremation burials were taking place with the arrival of the first Welsh Bluestones placed as grave markers in the Aubrey Holes a metre inside of the ditch as early as 3,000 BC. Burials continued at Stonehenge for at least another 200 years, with sporadic burials after that.17

Human remains are not uncommon at Stonehenge. During his work at Stonehenge between 1919 and 1926 William Hawley excavated the eastern side of the circle with almost all the prehistoric human remains coming from the ditch and the Aubrey Holes. It seems that no museum was prepared to curate these remains, since the scientific value of cremated bone was not appreciated in Britain at the time. In 1935,William Young and R.S. Newall reburied all the cremation deposits excavated from Stonehenge in several sandbags, accompanied by an inscribed plaque, they were tipped into the previously excavated Aubrey Hole 7. The remains were recovered from the Aubrey Hole in 2008 by the Stonehenge Riverside Project. Recent studies have identified the remains of some 63 individual from more than 50,000 cremated bone fragments buried at Stonehenge.18

It was previously thought that almost all the Stonehenge burials were of adult men. However, new techniques have revealed for the first time that they include almost equal numbers of men and women, and children including a newborn baby. Grave goods revealed high-status objects, such as a highly polished stone mace head, comparable to a sceptre, and a small ceramic bowl, interpreted as an incense burner, has led to the suggestion that the human remains recovered from the Aubrey Hole could have been from religious and political leaders and their immediate families; an elite group, the most important prehistoric families immortalised at Stonehenge.19

Not only did Geoffrey appear to have knowledge of the stones of the Giant's Dance being foreign to Salisbury Plain eight hundred years before Herbert Thomas announced the provenance of the bluestones was in Preseli south-west Wales in 1923, 20 but it also seems a remarkable coincidence that Geoffrey should have 460 British Nobles buried around the Giant's Dance when Stonehenge is surrounded by that number of barrows. Significantly, he reserves royal burials within the circle, shortly after the arrival of the Giant's Dance, for the British kings Aurelius, Uther and Constantine, when recent archaeological research has identified the earliest burials at Stonehenge, corresponding with the arrival of the bluestones, to an elite group of priest kings.

On the first count, it appears Geoffrey had knowledge that the Giant's Dance was an ancient cemetery. Is it possible he had knowledge of an ancient tradition regarding Stonehenge that stretched back to the Neolithic Age; four thousands years?

But in Geoffrey's account this all happened during the dark days of the Saxon wars, c.450 – c.650 AD. Is there any evidence of Dark Age burials at Stonehenge?


Next: Merlin and Stonehenge Part III: The Saxon Execution

The Battle of Stamford Bridge

Today is the 950th Anniversary of the Battle of Stamford Bridge fought on 25th September 1066, a striking victory for the English over the N... 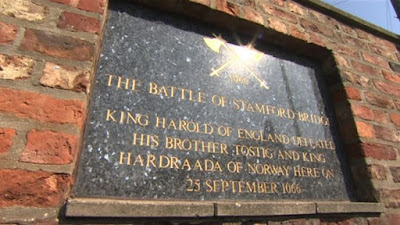