There are over a 1,000 known archaeological sites within this area of Staffordshire, ranging from Bronze Age burial mounds, Iron Age hillforts, Roman camps and documentary references to Anglo Saxon churches but surprisingly little evidence of activity in Stafford before the Late Saxon period.

Ancient Trackways
In Searching for the Stafford Burh - Part I we established that Æthelflæd,The Lady of the Mercians, included Stafford in the network of West Mercian burhs because it was roughly equidistant between the burh sites of Tamworth and Bridgnorth and situated in a naturally defended site surrounded by the river Sow or marshland on three sites, with a neck of land, formed from deposits of Mercian mudstone overlain by fluvio-glacial gravels left by melting ice sheets, extending from the north into the town centre. The etymology of the place-name is usually explained as the 'ford' by the 'landing place' (staithe). But this is a contradiction in terms; you ford a river at the shallowest point and a landing place, as in a quay or dock, is the deepest point.

The town and the landscape are shaped by water, the floodplain almost entirely surrounds the town
centre; the areas to the west and east are still largely wetland areas in the modern townscape. The natural defences of the land here combined with a postulated Roman road following a firm neck of land running through the centre of the town on the north-south axis, crossing the Sow at the southern end of the high street, providing a more satisfactory explanation for the meaning of the name of the town; “the causeway (firm ground) through the marsh.”

However, it has been suggested (Horovitz, 2003) that the “causeway” element of the place-name may have referred to a prehistoric trackway departing the town along the line of the medieval Eastgate in the direction of the modern Lammascote Road.

Maps from the medieval period show three main routes into the town; the route passing through the town from north to south, speculated as having been Roman in origin; the eastern route out of the town, following the Lammascote Road, believed to have been a causeway over the floodplain marshes. There appears to have been no major route to the west of the town in the medieval period.  However, the presence of a castle during the 11th century within the early town at Castle Hill, by Broad Eye, suggests a westward route may have once existed.

North of the medieval East Gate a large fish pond was created through the construction of a dam which has probably survived as the line of the modern eastward route out of the town centre. This eastern causeway at the southern end of the King's Pool (King's poole Medes), first referenced in 1157 AD, was almost certainly created from one of the marsh areas. An excavation in the 1970s identified the line of the causeway or a road comprising sandstone rubble and cobbles. By the mid 13th century a ‘bridge of the king’s pool’ is recorded suggesting there was a road over the dam which created the pool. The pool may have been initially constructed to power a mill located to the east of the town. Recent investigations at North Walls and the King’s Pool have uncovered evidence for hemp and flax, suggesting a medieval industry was sited here to take advantage of the necessary still waters (EUS, 2011).

Indeed, today Kingsmead Marsh is a designated Local Nature Reserve (LNR) made up of two main sections of marshland, situated between North Walls and the busy A34 dual carriageway (Queensway). The Lammascote Drain runs diagonally from NW to SE across the site with the Pearl Brook forming the north-eastern perimeter of the site. There are also a series of small drainage ditches that cut across the marsh. The Sandyford (Marston) Brook, a tributary of the Pearl Brook, runs through the Astonfields Balancing Lakes, originally wet meadowland but now a series of pools situated on the north-eastern edge of Stafford constructed in the 1970's for flood defence, controlling the amount of water flowing down the into the town centre.

The 1610 map of Stafford clearly depicts the town gates and walls which appear to have been constructed of both stone and timber. These defensive features have survived as place-names in the town into modern times, South Walls, North Walls, Eastgate Street, Greengate Street and Foregate Street. In 1644, during the Civil War, the King's Pool meadows and other land around Stafford was deliberately flooded to improve the defences of the town. The town walls suffered much damage by Cromwell's Parliamentarian forces and by the early 1670s the walls were said to be in ruins.

Evidence for the Iron Age in Stafford
In addition to the neck of land extending from the north into the town centre, it has been suggested (Horovitz, 2003) that a causeway across the wet and marshy area on the eastside of the town beyond the site of the later medieval East Gate, long pre-dates the Anglo-Saxon period, and may have been constructed in the Iron Age.

In 2002, during construction of a new petrol filling station at the ASDA superstore site next to the Queensway, situated immediately on the north bank of the Sow, three worked timbers with pointed ends were discovered. These three timbers have been interpreted as piles, either supporting a prehistoric raised trackway or a containment wall along the riverbank, and radiometrically dated to the Iron Age. If the “the causeway through the marsh” is the correct etymology for Stafford it has been suggested (Horovitz, 2003) that it may well refer to this Iron Age causeway leading east away from the town along the line of the modern Lammascote Road. This route may have persisted and developed into the medieval dam across the King's Pool as discussed above. 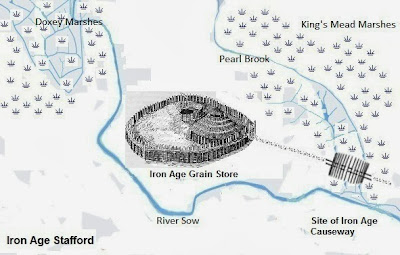 Evidence of Iron Age activity has been found in the town, centred around the site of St Mary’s Church; grain processing at St Mary's Grove (Carver, 2010), and traces of a possible Iron-Age hut found in the lowest levels during the excavation of St. Bertelin's chapel on the west end of St Mary's (Horovitz, 2003), combined with environmental evidence from pollen analysis of sediment at King's Pool indicates that the first forest clearance was in the late Neolithic period, with further human impact in the Bronze Age, accompanied by agriculture in the early Iron Age (EUS, 2011), supporting the case for prehistoric activity in the area. In addition, two red deer antler picks were found close together along the northern edge of Lammascote Road (the King's Pool side) in peat at depths of some 10' and 15'. (Horovitz, 2003)

The Sweet Track is the one of the earliest known causeways in the world, constructed  c.3800 BC and part of a network of ancient trackways that once crossed the Somerset Levels. The causeway was constructed of crossed wooden poles, driven into waterlogged soil supporting a walkway consisting of planks of oak, laid end-to-end. The basic design survived well into the Iron Age. The conjectured causeway at the eastern exit of the town was probably of similar construction.

However, it is difficult to accept that the route of this causeway may represent the topographical feature from which the 'ford' element in the place-name is derived, surviving from prehistoric times. Further, a causeway of prehistoric origins is far from being archaeologically proven. Given this information are there any further clues in the etymology of the place-name?

>> A Roman Road in Stafford?