The Tomb of Amr

“There is another wonder in the country called Ergyng (Ercing). There is a tomb there by a spring, called Llygad Amr (Licat Amr); the name of the man who was buried in the tomb was Amr. He was the son of the warrior Arthur, and he killed him there and buried him. Men come to measure the tomb, and it is sometimes six feet long, sometimes nine, sometimes twelve, sometimes fifteen. At whatever measure you measure it on one occasion, you never find it again of the same measure, and I have tried it myself.”1 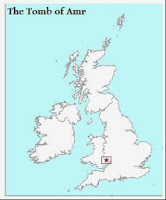 The early 9th century Historia Brittonum is the earliest document we have that can be considered a historical text referring to Arthur the warrior. As such the Historia lists Arthur's twelve battles in Chapter 56. The Arthurian battle list is typically cited as the departure point for any investigation into the historical Arthur, typically seen as twelve encounters between the native Britons and second generation English settlers.

There are several manuscript versions of the Historia Brittonum but the version contained in the Harly collection, known as Harlian 3859, is one of only two versions which contains the additional sections known as the Mirabilia, (Marvels, or Wonders of the Island of Britain), the Annales Cambriae (The Welsh Annals), and a collection of genealogies. The Welsh Annals also lists Arthur's battles at Badon and Camlann in a simple chronicle list as if authenticating these events.

Typically the Historia Brittonum ends at Chapter 66. However, the Harlian 3859 manuscript includes Chapters 67-75, the Mirabilia, which contain various items of topographical folklore that the author is familiar with or even personally experienced. From twenty Marvels, or Wonders of the Island of Britain listed, covering such oddities as the hot springs of Bath, the floating altar of St Illtud and the sixty islands of Loch Lomond each with an eagle's nest, two Mirabilia refer to Arthur; the paw print of his dog known as Carn Cabal, and the tomb of his son Amr. On both occasions these Marvels, in line the Arthurian battle list of Chapter 56, refer to Arthur as a warrior, not a king or emperor of later Romance; “Then Arthur along with the kings of Britain fought against them in those days, but Arthur himself was the military commander [dux bellorum].” By implication it appears Arthur was not regarded as a king himself. If we read the twelve battles of Chapter 56 as a historical record of a Dark Age military campaign we find Arthur in a very different world in the Mirabilia.2

Here in our earliest historical Arthurian text the legend is already in a two-fold state with the 'historical' Arthur, 'dux bellorum' the military leader of the battle list of Chapter 56 on one hand and the 'folkloric' Arthur attached to landscape wonders of the Mirabilia on the other.

The second Arthurian marvel in Chapter 73 of the Historia Brittonum cites the variable length of the grave of Arthur's son, Amr, slain by the warrior himself. We know little more of this son of Arthur from early Arthurian tradition apart from a brief mention in the Welsh Romance Geraint ac Enid in the Mabinogion as ‘Amhar son of Arthur’ one of Arthur’s four chamberlains along with  'Amhren son of Bedwyr'. We find Amren son of Bedwyr in Culhwch and Olwen, presumably the same Long Amren, a servant of Arthur, who features later in the tale during the task (anoeth) of obtaining the blood of the of the Black Witch, daughter of the White Witch, from the head of the Valley of Grief in the uplands of Hell. But Amr is absent from the text and fails to achieve any later fame in the Continental Arthurian Romances; the story of Arthur's slaying of his own son is otherwise lost to us.

Another son, Llacheu, features in early Welsh poetry, Pa Gur, and the later Black Book of Carmarthen, and just once in the early Version of the Triads (Three Well-Endowed Men of the Island of Britain). Another son of Arthur, Gwydre, is named in the early Arthurian tale Culhwch and Olwen as having been killed by the supernatural boar Twrch Trwyth at the battle of Cwm Cerwyn in the Preseli  mountains, South West Wales, commemorated by the Stones of the Sons of Arthur.

The Mirabile bears witness to the survival of an onomastic topographic tale drawn from local, popular folklore designed to explain the name Licat Amr and an associated tomb. Perhaps reminiscent of the grave of Walwen (Gwalchmai) as recorded by William of Malmesbury in his Gesta Regum Anglorum of c. 1125 as fourteen feet long on the shore at Rhos in South Wales. Gwalchmai's grave in mentioned in the Englynion y Beddau (The Stanzas of the Graves) but is silent on the whereabouts of Amr's grave.

The Eye of Amr
The usual identification of  Licat Amr (Llygad Amr), the eye of Amr, is the source of the river Gamber by the A466 road, just north from Llanwarne, in the ancient region of Ercing, Archenfield, situated between the River Monnow and River Wye in south west Herefordshire on the Welsh Marches. Herefordshire is also host to the ancient sites of the chamber tomb Arthur's Stone, claimed to be the tomb of Arthur, and King Arthur's Cave in the Wye valley.

The tomb by the source of the Gamber was a long barrow known as Wormelow Tump, some five miles south of Hereford, from which the village today claims its name. The tump itself was a mound which was demolished in 1896 to widen the road. Today the village pub, the Tump Inn, stands opposite the spot where Amr's tomb once stood.

'Licat' is a corrupted form of the Old Welsh 'llygad' meaning an 'eye'. We find an example of the word used for a spring in Lllygad y ffynon, 'the eye of the spring' meaning the source or place where the water issues from the ground or 'first sees the light'.3 We find the name Ffynnon y Llygaid, the Well of the Eyes, used for sacred springs or Holy wells across Wales: Pembrokeshire in South Wales; The Great Orme, North Wales; and one of the five ancient wells of  Dolgelly (Dolgellau).

Gamber Head has for centuries been equated with Licat Amr (Llygad Amr), the spring being some distance from the site of the former long barrow, or tump. However, the direction for anyone seeking Amr's tomb would be to direct him to the spring. The ever-changing size of the mound is said to be explained by the ebb and flow of the waters issuing from the spring. The water rising at the spring is believed to come from some considerable distance away, suggestions range from the Malvern Hills to the Black Mountains.4

The word 'tump' survives in the neighbouring Worcestershire dialect as a term used for a small hillock or barrow, derived from the Old Welsh 'twm' (tomb), as in Uley Long Barrow, known locally as Hetty Pegler's Tump, a Neolithic burial mound, in Gloucestershire overlooking the Severn.

Gamber Head is shown on Ordnance Survey (OS) maps as north of Llanarne between the A466 and B4348 roads, just south of Wormelow Tump. However, to the west Garway Hill, which abuts the Welsh Border on its south western edge, has been suggested as the true source of the Gamber. Just north of Llangarron, the Gamber flows into the Garren Brook which rises on the north-east flank of Garway Hill, before running south-eastwards on its journey into the Wye near Symonds Yat. In The Place Names Of Herefordshire Coplestone-Crow suggests that the Gamber may have been the older and original name of the complete course of the Gamber and Garren rivers.5

Yet the OS map does not display any ancient tombs on Garway Hill; indeed the description of the Marvel of Licat Amr in the Historia Brittonum fits perfectly with Wormelow Tump and the not so distant Gamber Head to the south. Furthermore, allowing for variance in the water table, it is quite possible that the source of the Gamber could have been further uphill in the past.

It seems that the tale of Arthur slaying his son Amr was attracted to this site by the local topographic and onomastic folklore of the Head of the Gamber becoming attached to a prehistoric site, as with many other ancient monuments that attract Arthurian associations; in Welsh the river Gamber is 'afon Amr,'  therefore Licat Amr is simply the source of the Gamber. Amr's Tomb is that rare piece of Arthuriana can be located with a reasonable degree of confidence.