According to John Rhys in Celtic Folklore the word Afanc seems to have originally meant simply a dwarf, then it came to be associated with water dwarfs. The original meaning appears to have been forgotten and the word was applied to any water monster. A direct translation of the word 'Afanc' is 'beaver' in modern Welsh.

The Bearded Lake
Situated high above the northern banks of the River Dyfi is Llyn Barfog, the Bearded Lake. It is said that a terrible water demon, the Afanc, lived in the lake, from where it would raid the surrounding countryside. The Afanc would kill anybody who went close to Llyn Barfog where it had made its home. Sometimes it went on the rampage, killing people in the town and causing flood damage as it thrashed around in the lake.

When Arthur came to hear of the strife caused by the water demon at Llyn Barfog he went to the lake and threw a great chain around the Afanc. Using his horse Llamrei to pull the Afanc from the lake, the struggle was so arduous that his steed left a hoof print in a nearby rock overlooking the Dovey Estuary. Today a stone on a hill above Aber-tafol, Merioneth, on the A493, bears a depression that is said to be the hoofprint of Arthur's horse, known locally as Carreg Carn March Arthur (‘Stone of Arthur’s Steed’s Hoof’). 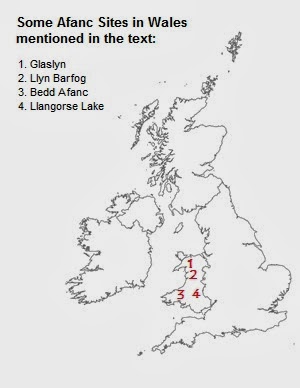 There are however several variations on the Afanc  legend; other tales have a beautiful Welsh maiden luring the Afanc out of the pool with a soothing lullaby. The intention was for her to enchant the creature, while a hunting party chained and hauled it from the lake and sent it on its way to its eternal doom. But there was no happy ending to this tale with the Afanc crushing the maiden to death during the chaotic struggle.

The Lake Of The Green Well
Most lakes in Wales were, however, said to have a had a resident Afanc at one time or another; some were thought to lie sleeping in the depths of a lake, and could sleep for well over a hundred years. A further legend concerning a water demon exists a little further north in a lake on a glacial cwm in Yr Wyddfa, Mount Snowdon. At 1,970 feet above sea level, Llyn Glaslyn, coloured green-blue by the presence of copper, is one of the highest lakes in north Wales, covering an area of some 18 acres. It is said that no bird will fly over it, it is the abode of demons, it is bottomless, it never freezes and that it harbours no ordinary fish. The original name of this sinister lake was Llyn Ffynnon Las, the lake of the green well, or blue fountain.

Glaslyn bears a similar legend to Llyn Barfog in so much as it was the abode of a water demon, a troublesome pest that would cause flooding to the local area by thrashing around in the lake. The Afanc lived in a pool on the Conwy near the Fairy Glen which is still called Llyn-yr-Afanc near Betws-y-Coed roughly twelve miles to the east. The antiquarian Edward Lhuyd recorded the tale in 1693.

When all attempts to kill the beast had failed, it was decided to remove the Afanc  to Llyn Ffynnon Las. The plan was to entice the creature from the pool and relocate it to another lake out of the way. They used a local girl as the bait and made her sing near the lake. When the Afanc left the lake to approach the girl, the local men captured it and immediately bound it in chains. The Afanc was then attached to a pair of oxen to drag it out of its home and taken through the mountains of Dolwyddelan and the pass between Moel Siabod and Cribau, called Bwlch Rhiw yr Ychain (pass of the oxen’s slope). One of the oxen struggled so much that it lost an eye on the western slope, which was then called Gwaub Lygad yr Ych (Field of the Ox’s Eye) and its tears formed a pool – Pwll Lygad yr Ych (Pool of the Ox's Eye), which never dries up although no stream flows into or out of it. The rest of the journey to Llyn Ffynnon Las on the shoulder of Yr Wyddfa had no more incidents, and it is said that upon arrival the Afanc  jumped into the lake where it has remained to this day.

In the early 18th century, a shepherd who claimed to have seen the water demon described it as 'toad-like, with tail and wings'. In the 1930’s, another eyewitness, one Oliver Vaughan, was walking with a friend up the slopes of Yr Wyddfa, when they stopped for lunch they were looking down on Lake Glaslyn. They saw a grey line appear in the lake which they thought it to be a creature rising to the surface. Then a pale coloured, almost white head appeared on the surface. Mr Vaughan said it was not an otter or anything else he was familiar with and remained puzzled as to what it was they had seen.

Stories of the water demon abound in Wales, with further variations recorded in south Wales. One of the earliest descriptions of the Afanc is given by the 15th century poet Lewys Glyn Cothi, who described it as living in Llyn Syfaddon, or Llangorse Lake, in the Brecon Beacons, the largest natural water in South Wales:

The afanc am I, who, sought for, bides
In hiding on the edge of the lake;
Out of the waters of Syfaddon Mere
Was be not drawn, once he got there.
So with me: nor wain nor oxen wont to toil
Me to-day will draw from here forth.

The Grave of the Afanc
Situated south of the B4329 at the village of Brynberian in Pembrokeshire, South Wales, at the centre of a 'U' shaped valley, on a slightly raised oval plateau surrounded by a raised bog, set against the impressive vista of the Preseli hills of Cwcerwyn, Carn Menyn and Foel Drygarn, we find Bedd yr Afanc, (the Afanc 's Grave), or Crug yr Afanc (the Monster's Mound), a tumulus, on a knoll near the stream of the Nevern. The Afanc  was caught in a pool near the bridge of Brynberian, and interred in what is now regarded as its grave. 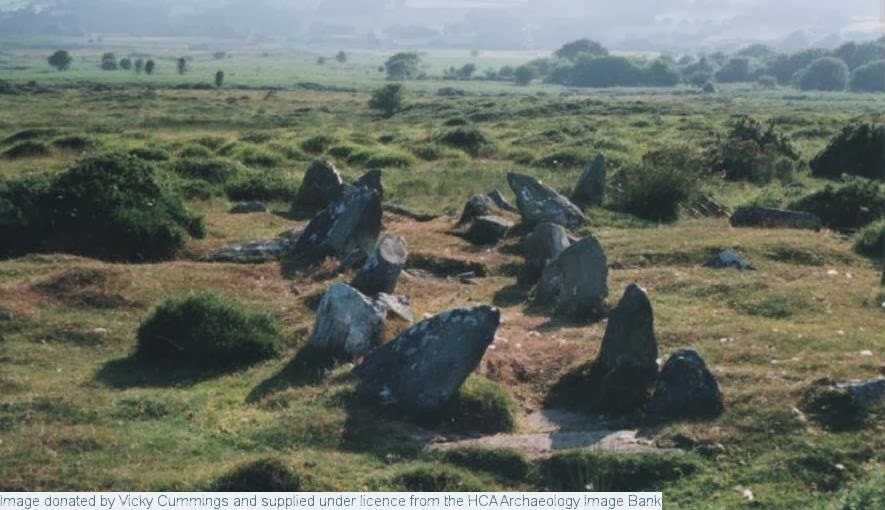 A North Pembrokeshire legend says that in ancient days the Afanc, dwelling on the Preseli slopes somewhere above Brynberian, ravaged the countryside, so the local people decided to slay him by a trick. They got him to dig a well and when he had dug to a great depth the people above tipped into the hole he had made a big load of white rocks gathered up from the nearby mountain. But next morning they found him still digging, and were informed by him that there had been a rather heavy snowstorm on the previous day. Thus they were unable to do away with him, so he continued as before, eventually dying a natural death, after which he was buried on the hill side in the tumulus we see today.

Dating from the Neolithic period Bedd yr Afanc is the only Gallery Grave in Wales. None of the capstones have survived, the main part of the grave is the passage, with ten pairs of upright stones in two parallel rows, about 35 feet long, leading to a small, circular chamber at the west end of the mound, marked by seven stones of similar size. The site nestles below the Preseli Mountains, not far from the famous cromlech Pentre Ifan, once called Arthur's Quoit.

Email ThisBlogThis!Share to TwitterShare to FacebookShare to Pinterest
Labels: Afanc