Rising in the hills to the north of Ffestiniog, the Afon Dwyryd runs past the village of Maentwrog, on its journey westwards into the sea into Tremadog Bay where it merges with the Afon Glaslyn. About a mile to the north the river is joined by the Afon Cynfael which flows down a deep wooded gorge with the spectacular waterfalls of Rhaeadr Cynfael (the waterfalls of Afon Cynfael), near Llan Ffestiniog. It is on the banks of Afon Cynfael where Goronwy Pebyr was slain by Lleu Llaw Gyffes in the Fourth Branch of the Mabinogi, the tale of Math son of Mathonwy. 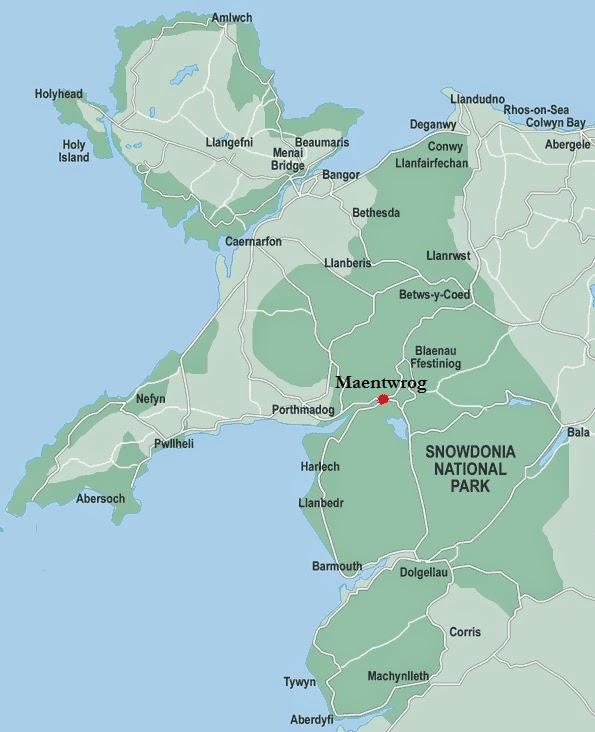 Maentwrog stands on the line of the Roman road of Sarn Helen (now classified as the B4410), in the Vale of Ffestiniog just below Blaenau Ffestiniog, within the Snowdonia National Park. The village lies on the A496 between Harlech and Blaenau Ffestiniog, at the junction with the A487 from Porthmadog, and the A470, Trawsfynydd to Dolgellau road.

The original Medieval church, situated on the west side of the A496 in the centre of the village, was rebuilt in 1814 and the nave of the present building is said to be built on the foundations of the earlier church. The church is dedicated to St. Twrog and St. Mary. Standing outside the west end of the church is a rounded sandstone pillar just over a metre tall known as Maen Twrog providing the village with its name.

According to legend, a giant called Twrog threw the stone, which still bears his thumb and finger marks, from the top of Moelwyn Bach down into the settlement destroying a pagan altar. It seems likely the stone throwing episode at Maen Twrog is a confusion of one and the same event.

“To the west of Ffestiniog can be seen the mountain that Twrog Gawr levelled in order to build himself a court at Traeth Mawr, and near the top of this he threw a stone that is at the portal of the church Maentwrog, on which his thumb and fingerprints are still today.”1

Some monumental deeds of the saints are often related to the work of giants; megalithic constructions for example, are often claimed to be either the work of St Samson or a giant, such as Carreg Samson.

“Y Garreg Wen (The White Rock) stands in the corner of a field Brenan near Croessffordd Rhydygolwg on the northern side of the road that leads from Penuwch to New Cross. This is a huge stone. Attempts were made to move it many times. Traditions says that silver or some treasure is hidden beneath it.....It is said, according to an old tale or other tradition, that Bishop Samson of Llanbadarn was ploughing in the field and the white rock suddenly got stuck in his clog (shoe), and when he got hold of it he threw it to the side of the ditch and there it is until this very day.”2

St. Twrog, a 6th-century Welsh saint, is said to have founded the church there. It is said that Twrog was the son of Ithel Hael o Lydaw of Brittany and the brother of Saint Tanwg of Llandanwg whose medieval church containing two 6th century inscribed stones, is situated in the sand dunes on the coast between Llanbedr and Harlech, close to the village of Llanfair.

The Fourth Branch of the Mabinogi claims that the stone marks the grave of Pryderi who was killed at the Glaslyn estuary by Gwydion who defeated him by magic in single combat following the theft of some magic pigs that Pryderi had obtained from Annwn. After Gwydion has stolen the supernatural swine from Dyfed in south Wales by trickery Pryderi pursues him north into Gwynedd. Math son of Mathonwy and Pryderi engage in battle between two fortresses Maynawr Bennard and Maynawr Coet Alun.

“Pryderi advanced towards them there, and there the battle was. There was great slaughter on both sides, and the men of the South had to retreat. The place to which they retreated up to was a place that is still called 'Nant Call', and they were harried as far as there. Then there was an immeasurable conflict. They then retreated to a place called Dol Penmaen. Then they rallied and sought to make a truce - and Pryderi gave hostages [in return] for peace. This is who he gave: Gwrgi Gwasta and twenty-three sons of noblemen.”3

They appear to have been following the line of an old trackway leading from Nantcall (probably modern Nant Cyll north of Porthmadog) through Dolbenmaen to Maentwrog, roughly along the line of a possible Roman road, the A487 to Caernarfon.

“After that, they went in peace as far as Traeth Mawr; and as they came up to Felen Rhyd together, the foot soldiers could not be stopped from firing at each other. Messengers were sent from Pryderi to ask for the two war-bands to be called off, and to ask for it to be left between himself and Gwydion son of Don.”4

The Traeth Mawr ('big sands') is a a low-lying tract of land formerly the tidal estuary of the Afon Glaslyn at  Porthmadog. Around 1798, William Madocks bought the Tan-yr-Allt estate near Penmorfa Marsh. He reclaimed an area of sand from the sea by building a bank from Clog-y-Berth to Portreuddyn, where he built the village Tremadog. Between 1808-11 Madocks constructed an embankment, the Afon Glaslyn causeway, called "the Cob" from the island of Ynys Towyn (now part of Porthmadog) near the Caernarfonshire shore to Boston Lodge on the Meirionnydd shore, diverting the Glaslyn, in order to cut off the estuary from the sea.

The quality of Welsh slate has been recognised since Roman times; Roman forts in North Wales were using slates from 77 AD; it was being exported from medieval times with the industry reaching its peak during the industrial revolution. Madocks developed Porthmadog (Port Madoc) as a deep sea port to transport Welsh slate from Blaenau Ffestiniog. The Ffestiniog Railway line was constructed between 1833 and 1836 to link the quarries of Blaenau Ffestiniog to Porthmadog where it was loaded onto ships. It is here that the battle of the Fourth Branch of the Mabinogi continued:

“Those men were set apart and the equipping of them begun, and they fought. And by dint of strength and valour and by magic and enchantment Gwydion conquered, and Pryderi was slain. And at Maen Tyriawg, above Y Felenrhyd, was he buried, and his grave is there.”5

The place of Pryderi's burial is given in the MSS. as Maen Tyuyawc but was amended to Maen Tyryawc (Maentwrog in Ardudwy) by Lady Charlotte Guest in her collection of tales known as The Mabinogion and accepted by later Welsh scholars. Yet, the exact location of the grave is something of a mystery. The Englynion y Beddau (The Stanzas of the Graves) records Pryderi's grave at the confluence of the Gwenoli:

"In Abergenoli is the grave of Pryderi,
Where the waves beat against the shore."6

Aber Gwenoli is where the little stream Gwenoli, rising near Llyn Tecwyn, flows into the river of the Felenrhyd near Ivy Bridge about a mile south-west of Maentwrog.7 However, there is no sign of an ancient grave here today.

Perhaps we should expect to find a prehistoric grave here like that of Branwen at Anglesey. The Second Branch of the Mabinogi tells us that after landing at Anglesey Branwen dies of grief after so much destruction had been caused on her account,“Then she uttered a loud groan, and there broke her heart. And they made her a four-sided grave, and buried her upon the banks of the Alaw.”

A ruined ringcairn named Bedd Branwen has a small standing stone in the middle, close to a cist. Several Bronze Age urns and a cremation were found during excavations in the 1960s.

There is a mound of unknown date situated on the banks of the Afon Dwyryd. On the road from Llandecwyn to Maentwrog is a mound known as Bedd Dorti, which has never been excavated. Dorti lived in the Llandecwyn area during the 17th century and it is said that she would always have a black cat on her shoulder and  popularly claimed to be a witch. Local lore claims that Dorti was killed when she was put in a cask and thrown off the high rocks above Llyn Tecwyn. Dorti was buried at the spot the cask landed in the Vale below.

The mound is covered with white stones, and the local tradition is that unless the passer-by adds a white stone to the heap he will die within a year.8 The mound is still visible but was damaged by vehicles which exposed a section showing the mound itself to probably be a natural feature topped by a small cairn of white quartz stones. The use of quartz  in the construction of prehistoric funerary monuments is well known, which may indicate that Bedd Dorti was an ancient tumulus.