Wave after wave, each mightier than the last,
Till last, a ninth one, gathering half the deep
And full of voices, slowly rose and plunged
Roaring, and all the wave was in a flame:
And down the wave and in the flame was borne
A naked babe, and rode to Merlin's feet,
Who stoopt and caught the babe, and cried "The King!
Here is an heir for Uther!"

Island of Disenchantment
Straddled across the windswept precipitous headland, Tintagel Castle is half on the mainland, half on the island, connected only by a narrow neck of land which has led to the popular acceptance that the origin of the name arises from Cornish Dintagel; 'Dun' meaning 'fort' with '-tagell' meaning 'narrow place'.

Suggestions that the source of the name is from 13th century Norman French at first glance seem absurd but Geoffrey of Monmouth's History of the Kings of Britain (Historia Regum Brittaniae) c.1136 AD contains the earliest written mention of Tintagel in the tale of how Arthur was conceived there when Uther Pendragon, King of Britain, magically assisted by Merlin of course, seduced Queen Igerna, the wife of Duke Gorlois of Cornwall. We have no idea why Geoffrey would have chosen Tintagel as the site of the conception but we do know that he placed much of his Arthurian 'history' in Cornwall. 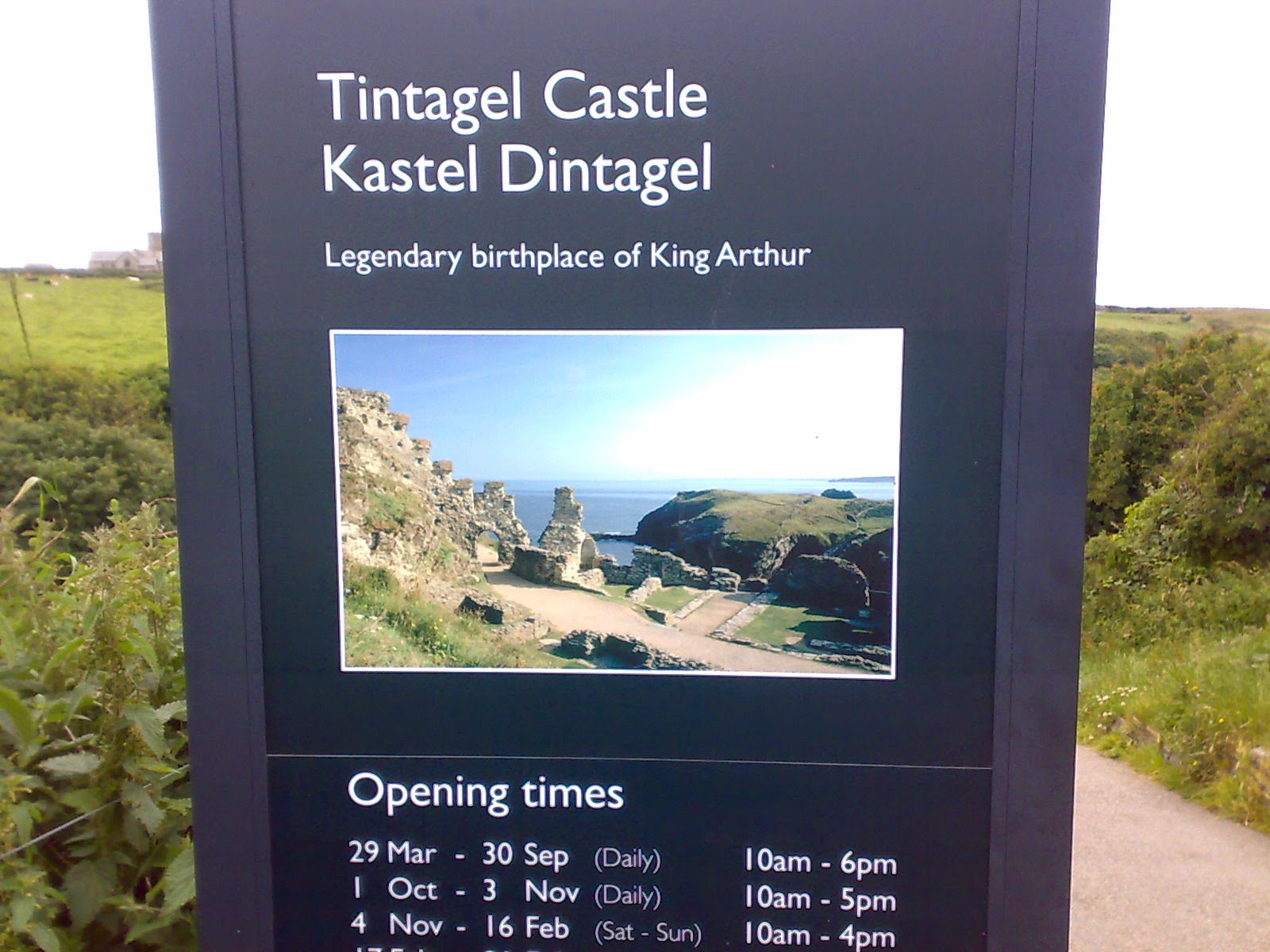 There is little evidence of any occupation before the Dark Ages, various small finds, including pottery and some late 3rd and early 4th century Roman coins, suggest activity on the headland but nothing more. From around 450 AD to 650 AD Tintagel was a prosperous and highly significant site. Its position made it highly defensible and most unusually it also has supplies of fresh water.

C A Ralegh Radford's excavations in the 1930s identified the apparent pattern of scattered small-scale structures as buildings of a monastic enclosure; the remoteness of the headland would be an attractive site to those seeking isolation. Radford worked at the site again in the 1950s and found nothing to change his mind. Indeed, some of the pottery fragments bore Christian symbols, taken with the wider distribution of these types of imported pots they appear to match that of early Christian inscriptions. Fragments of imported high-quality Mediterranean pottery have been found all over western Britain, but Tintagel has by far the largest quantity so far discovered. The pottery along with  Mediterranean glassware is evidence of trade with lands as far away as ancient Byzantium, possibly in exchange for desirable Cornish tin.

This remained the accepted interpretation of Tintagel island until Archaeological excavations, commissioned by English Heritage, between 1990 and 1999 re-evaluated Radford's work and concluded that instead of a small community of Celtic monks, Tintagel may have been one of Western Britain’s premier centres of Dark Age political and military power.

Radford, along with Geoffrey Ashe, co-founded the Camelot Research Committee in the 1960s with like-minded individuals under the direction of archaeologist Leslie Alcock in an attempt to discover Arthurian sites such as Camelot. Ralegh Radford directed excavations at Glastonbury Abbey between 1951 and 1964, the infamous burial place of King Arthur; Alcock directed excavations at South Cadbury hillfort from 1966-70 publishing his interpretation of his findings in the book 'By South Cadbury Is That Camelot' (Thames & Hudson, 1972).

The pottery finds, combined with the buildings on the headland suggest intensive occupation at this period, often interpreted as a seasonal stronghold of the Kings of Dumnonia (Devon and Cornwall).
The  high-quality Mediterranean pottery has also been found at Cadbury Castle in Somerset, a favoured suggestion for Arthur's Camelot. Then suddenly the pottery imports stopped.

After the mid-7th century there is little evidence of activity on the Tintagel headland for the next 500 years. During the 13th century, a castle was built on the site by Richard, Earl of Cornwall, which later fell into disrepair and it is the ruins of these buildings that dominate views of the site today. Once past the 13th century curtain wall to the Great Hall courtyard you are at will to explore the Dark Age remains that are generally distinguished as low grass-covered banks over the top of the island. If you know where to look you will find King Arthur's Footprint immortalised in stone at the highest point of the island. Nearby is King Arthur's Seat a cleft in the cliff. The rock here bears a peculiar series of hollows known as King Arthur's Cup and Saucers.

In about 1480 the antiquary William Worcestre claimed Tintagel as the place of Arthur’s birth as well as his conception but the identification of Tintagel as King Arthur’s Castle is not found until 1650. However, by now Arthur's base was firmly established at Camelot, wherever that was, and Tintagel,with little activity, slipped into relative obscurity until a late revival in the Victorian Age and became a tourist attraction.

The cavern on the west side of the Haven is known as Merlin's Cave. This is a late addition to the Arthurian legend and known since the late 19th century and publication of Tennyson's Idylls of the King. It is here, according to Tennyson, that the infant Arthur was washed up on the shore.

Today the site is managed by English Heritage and many visitors, myself included, come away with a rather negative picture of the place of where King Arthur was conceived, or born, depending which legend you are recalling. The dominant remains are those built by Richard, Earl of Cornwall, in the 13th century. The Dark Age remains are slight and, as well laid out and identified as they are, are not much to look at and hardly inspire any connections to a 6th century power base of the  Kings of Dumnonia. The so-called 'Artognou' stone found on the headland in 1998 has no connection whatsoever with King Arthur although it was much publicised as such at the time of its discovery; no doubt it was good for business. Even the name of the island may be French. And to cap it all the video display shown in the EH visitor centre will certainly dispel any hopes of finding an historical Arthur here. I left this island of disappointments feeling rather flat like so many others. 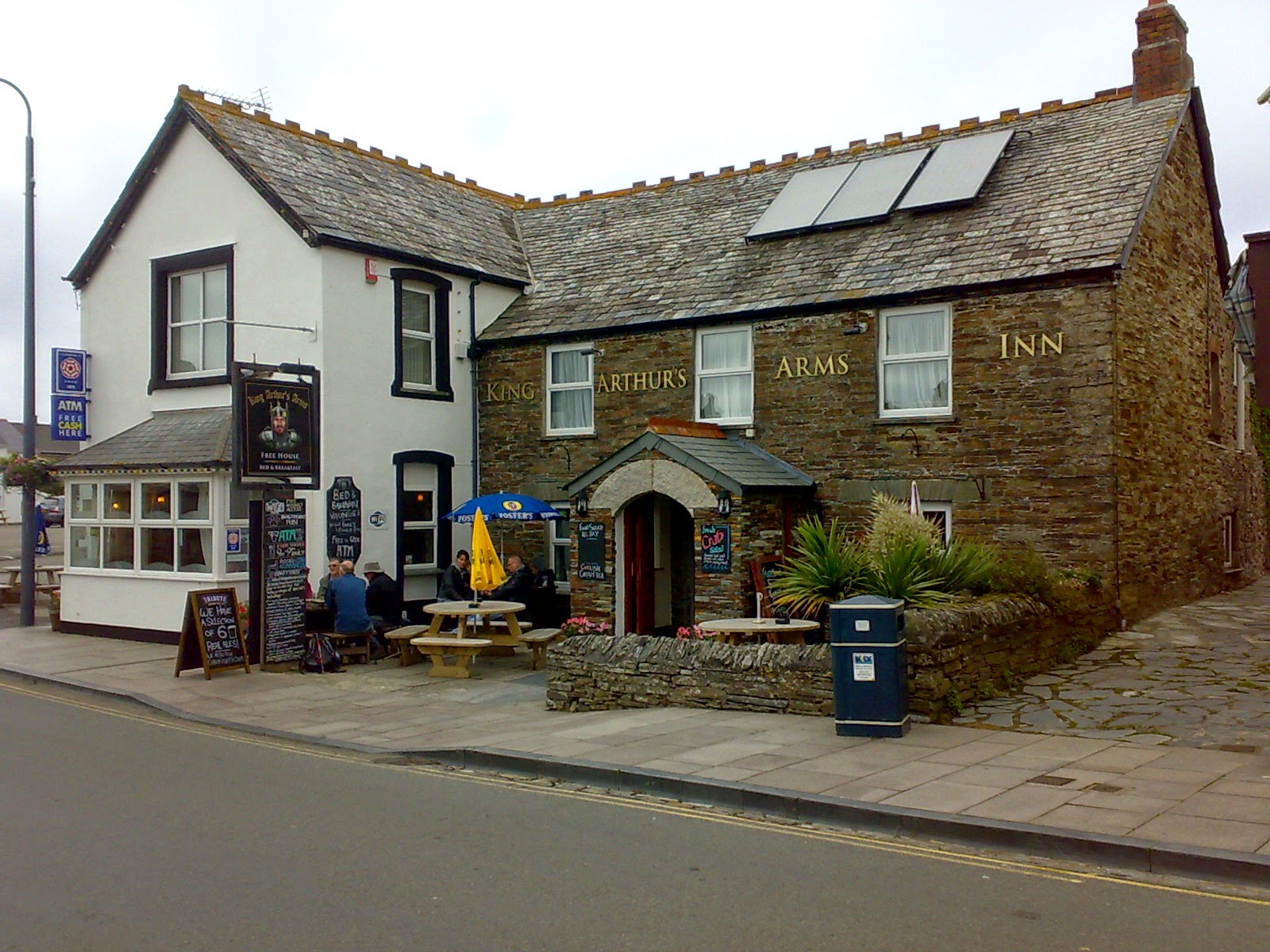 On walking back up to the village, once named Trevana, but not shy in missing the opportunity of Arthurian exploitation, they changed its name to Tintagel to match the castle, you pass the King Arthur's Arms Inn and opposite is the oldest Post Office in the country, dating to the 14th century, complete with sagging roof.  Further along the high street passing a myriad of gift shops you arrive at King Arthur's Great Halls of Chivalry.

Email ThisBlogThis!Share to TwitterShare to FacebookShare to Pinterest
Labels: Tintagel