A Roman Catholic pilgrimage was held in 1895 after the beatification of Abbot Richard Whiting, John Thorne, and Roger James, the three Glastonbury martyrs executed in 1539.

In 1897 the archbishop of Canterbury led an international pilgrimage to Glastonbury Abbey in commemoration of the 1300th anniversary of the arrival of St. Augustine in England.

Excavations at the abbey site from 1907 until 1921 under the controversial Frederick Bligh Bond raised national awareness of the significance of the abbey and led indirectly to the formation of the Anglican West of England Pilgrimage Association, which almost every year since 1923 has organised a pilgrimage to the site. 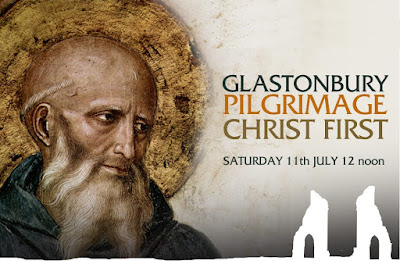 
“There was a brief hour during the Middle Ages when poetic imagination wove all Glastonbury's threads into a single cord. Its Abbey rose to an apogee of honour. Pilgrims called it a second Rome. It wove so mighty a spell that nothing would do at the Reformation but total ruin. And still, through all that history of mysterious warfare and mysterious truce, the landscape endures. The enchantments of mist and sunset transform it from one day to another, and its final secret remains elusive.” - Geoffrey Ashe, King Arthur's Avalon.

On taking up residence in the Somerset town of Glastonbury many find a division between the local Somerset folks who have lived there for generations, and the incomers of ‘the New Age community’.

After moving to Glastonbury author's such as Jon Cousins (The Glastonbury Documents) and dowser Sig Lonegren noted it was something more than just a divided community and has something to do with the dissolution of the Abbey. The ritual murder of the three Glastonbury martyrs on the Tor makes absolutely no sense in the context of the Dissolution of the Monasteries and forces the opinion that there must have been, what Glastonbury author Geoffrey Ashe calls 'Something Else', a secret that the Last Abbot of Glastonbury, Richard Whiting, took to the grave.

The dysfunction felt in today's Somerset town has its roots in this macabre ritual act in 1539 when the heart of the town and its spirit was broken.

Cousins has contacted Churches in Glastonbury and the Anglican and Catholic Bishops of this diocese to see if they would be willing to hold a healing service of remembrance in the Abbey on the day of the martyrdom. The local churches and all of the people of Glastonbury of all denominations were invited to participate in this ceremony to bring the separate parts of Abbot Whiting back together in an act of healing. But oddly not one of the Churches wanted to be involved with the event.

An Alternative Glastonbury Pilgrimage
Further research has revealed that the execution of the three Glastonbury martyrs actually took place on Friday, 14th November 1539.

In 2014 an event was organised by Jon Cousins for anyone wishing to pay their respects to Abbot Richard Whiting and his fellow Glastonbury martyrs John Thorne, and Roger James. After gathering at Frederick Bligh Bond 's War Memorial on Glastonbury High Street (outside St. John's Church) at 11 am, to observe a Silent Minute at 11.14 am, on Friday, 14th November. From there the procession walked to the summit of Glastonbury Tor where a further Silent Minute was observed.

“Thank you everyone who came to Remember Richard Whiting, John Thorne, and Roger James today - holding a Silent Minute at Bligh Bond's War Memorial at 11.14 am.
A few of us proceeded to the summit of the Tor, where we observed the Silent Minute again. Also remembered today were the mysterious 'parties' mentioned in Lord Russell's letter to Thomas Cromwell on 16th November 1539 - who were killed on the same day as the Glastonbury Three – 'all condemned and four of them executed at a place called the Were' (possibly Weary-all Hill).”