The Disappearance of Arthur, Duke of Brittany

The Princes in the Tower
After the discovery of Richard III's remains in 2012, the re-interment at Leicester Cathedral in March 2015 was attended by the Archbishop of Canterbury and senior members of other Christian denominations along with members of the Royal family. Calls for a full state funeral for the last of the Plantagenet kings, a dynasty who had ruled England since the accession of Henry II in 1154, culminating in re-burial at Westminster Abbey, were rejected.

A dark cloud persists over Richard's rise to power and his brief reign. Shakespeare portrayed him as the hunchback King, a villain who murdered his way to the throne. The Elizabethan playwright refers to the legend of the 'Princes in the Tower', the disappearance of his young nephews and rivals to his throne.

Richard, then Duke of Gloucester, was appointed to look after his nephews, 12-year-old Edward V and his 10-year-old brother Richard, the only sons of Edward IV of England.  As Lord Protector he was to prepare the young Edward for his coronation as king. However, Richard took the throne for himself and the boys disappeared without trace in the Tower of London in 1483.

Our story begins with the death of Richard I, “the Lionheart", (Coeur de Lion) in 1199.

A Family at War
Richard was the second eldest son of Henry II and Eleanor of Aquitaine. Richard had joined his family in a rebellion against their father, the King, in 1173. Eleanor is suspected of manipulating her sons, Henry, Richard, Geoffrey to revolt against their father; the three brothers made an oath at the French court that they would not make terms with Henry II. The youngest son, John, was only five years old at the time and remained in England. In 1183 the elder brother Henry died, leaving Richard heir to the throne. King Henry II wanted to give Aquitaine to his youngest son, John but Richard refused and, in 1189, joined forces with Philip II of France against his father, pushing him to a premature death in July of that year.

Prompted by Saladin's capture of Jerusalem in 1187, Richard 'took the cross' and finally departed for the Holy Land  in 1190. On his return from Crusade he spent the last five years of his reign, 1194-99, in intermittent warfare against his former ally Philip II. While besieging the castle of Châlus in central France he was hit in the neck by a crossbow bolt and the wound became infected. He died on 6 April 1199 and was buried at Fontevraud near his father. Richard's death gave his younger brother John opportunity to grasp power, but he would not find it easy to gain control of his father's empire. 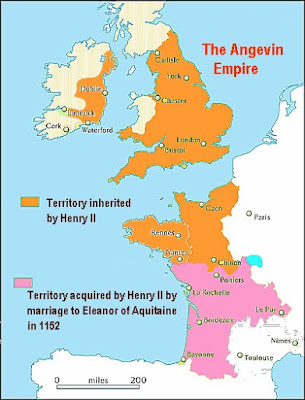 John attempted to claim the Angevin treasure and the castle at Chinon to install his power. But, in the local custom, the son of an older brother was preferred as claimant to the throne. Arthur, son of Geoffrey of Brittany, was recognised as the heir thus depriving John of the Angevins' ancestral land.

Prince Arthur was the son of Constance of Brittany and Geoffrey Plantagenet, Duke of Brittany, the brother of Kings Richard and John, and third son of Henry II, younger than Richard but older than John. In August 1186 Geoffrey died in a jousting accident leaving his wife Constance with two young daughters and pregnant with a third child. In the following March Constance gave birth to a son, Arthur. One of Arthur’s sisters, Maud, died in early childhood while his other sister, Eleanor, was known as the Fair Maid of Brittany.

When King Richard the Lionheart left for the Crusades in 1190 he designated the young Arthur as heir to the throne of England and the English held French territories should Richard not return. In 1196 Richard again named Arthur as his heir. However, on his deathbed in 1199, Richard is claimed to have changed his mind and declared his younger brother John as his heir, apparently fearful that Arthur, at just 12 years old, was too young to become king.

John's rule was limited to Normandy and England; he was made Duke in April 1199 in Rouen, Normandy, and later crowned as King of England in May at Westminster Abbey. He left his mother, Eleanor, controlling Aquitaine. Consequently, support for the two heirs to the Angevin throne was divided with the majority of the English and Norman nobility supporting John’s claim, while the French supported Arthur’s; it wasn't long before war broke out between John and Arthur.

John went to Normandy to negotiate a truce with Philip II. William des Roches, a strong supporter of the king and protector of Arthur, switched allegiance and handed over Arthur to John. Yet, Arthur managed to escape and join Philip II's court. At this time many French nobles decided to join the crusade in 1199 and deserted John's court. John's dominant position was short-lived and he had no option but to accept the Treaty of Le Goulet in 1200 in which Philip II was confirmed over the lands he had taken in Normandy joined by further concessions in Auvergne and Berry. John was recognised at the head of Anjou.

Arthur with his Lusignan allies attacked Poitou, while Philip II attacked Normandy and captured many castles on the frontier. John was in Le Mans at this time and moved south. However, John's fortune was to change in 1202. On 1st August that year John's forces took Arthur by surprise, capturing him and along with Hugh X of Lusignan and 200 French knights. Arthur was imprisoned in the Chateau de Falaise in Normandy, the birthplace of William the Conqueror, Duke of Normandy.

The Mystery of Arthur's Disappearance
At Chateau de Falaise Arthur was guarded by Hubert de Burgh. According to the chronicle of Ralph of Coggeshall, John issued orders for Arthur's jailers to blind and castrate him but Hubert refused to let the young prince be mutilated.

The following year, Arthur was transferred to Rouen Castle and subsequently vanished in April 1203. Arthur's disappearance gave rise to various stories; one was that Arthur's jailers feared to harm him, and so he was murdered directly by King John and his body dumped in the Seine. The Margam Annals provide the following account of Arthur's death:

"After King John had captured Arthur and kept him alive in prison for some time, at length, in the castle of Rouen, after dinner on the Thursday before Easter, when he was drunk and possessed by the devil ['ebrius et daemonio plenus'], he slew him with his own hand, and tying a heavy stone to the body cast it into the Seine. It was discovered by a fisherman in his net, and being dragged to the bank and recognized, was taken for secret burial, in fear of the tyrant, to the priory of Bec called Notre Dame de Pres."

Following Arthur's disappearance William de Braose rose in John's favour and was awarded new lands and titles in the Welsh Marches; de Braose was obviously suspected of complicity in Arthur's disappearance. Many years later de Braose fell out of favour and came into conflict with King John, his wife Maud directly accused John of murdering Arthur. Subsequently, Maud and her eldest son were imprisoned in Corfe Castle in Dorset and allegedly starved to death. William de Braose fled to France where he is claimed to have published a statement on what happened to Arthur but no copy has survived.

Arthur's sister Eleanor, the Fair Maid of Brittany, was imprisoned by John in 1202 and kept under house-arrest until her death in 1241. Her imprisonment has been referred to as the ‘most unjustifiable act of King John’ after she spent some thirty years or so in confinement in various Castles in England.

End of an Empire
King John's complicity in Arthur's death is seen as the major single cause of the dismembership of the Angevin Empire, originally established by Henry II of England, Count of Anjou and Duke of Normandy, during the late 12th and early 13th centuries. The lands of the House of Plantagenet extended over roughly half of medieval France, all of England, and parts of Ireland and Wales, an area stretching from the Pyrenees to Ireland.

King John was defeated in the Anglo-French War (1202–14) by Philip II of France which left the empire split in two, with John losing many French provinces, including Normandy and Anjou. By the time King John and Philip II finally agreed to a truce in 1206, the "Angevin Empire" had been reduced to only Gascony, Ireland, and England.

Curiously, following the disappearance of Arthur Duke of Brittany and the later death of Arthur Prince of Wales, the eldest son of Henry VII and elder brother of Henry VIII, in 1502 of a mystery illness, no one of that name has ever survived to become king; "King Arthur" uniquely refers to the one and only legendary Dark Age leader of battles who rallied the Britons during the onslaught of the Anglo-Saxon invaders.