A Four-year archaeological study concludes that 12th century monks spun mythical links to make it one of the country's richest monasteries in the land inventing many stories to raise funds after the devastating fire of 1184.

The Glastonbury legend claims the site was founded by Joseph of Arimathea, shortly after the days of Christ, and King Arthur was buried in the Abbey grounds. Later generations of monks became so engrossed by the legends that they either suppressed or misinterpreted evidence that did not fit.

Sites in the town became linked with the legend of the holy grail, One story says that Christ himself came and built a church in honour of his mother and that Joseph of Arimathea came to Glastonbury from the Holy Land and planted his walking stick which flowered miraculously.

Concluding a four year study that commenced with a One-Day Symposium in  2011 Rediscovering Glastonbury Abbey Excavations 1908 – 1979 the Glastonbury legend has been dismissed by the team of 31 specialists, led by Roberta Gilchrist, professor of archaeology at the University of Reading, which re-examined all the unpublished records of 20th-century excavations.

The study has revealed how the medieval monks spun the abbey’s mythical links to make Glastonbury one of the richest monasteries in the country. New analysis has highlighted how the monks crafted the legends to restore the abbey’s fortunes after a devastating fire in 1184.

Professor Gilchrist said: “The monks needed to raise money by increasing the numbers of visiting pilgrims, which meant keeping the myths and legends alive. They also found evidence that the monks laid out the buildings in a very distinctive way to emphasise the ‘earliest church’ story."

Gilchrist added: “We took a step back from the myth and legends and used 21st-century technology to expose the abbey’s true history.”

However, new discoveries suggest a previously unknown glassworks dating from as early as the 7th-century was in operation at Glastonbury, the earliest archaeological evidence of glass-making in Britain. Ceramic fragments were also found at the site proving that wine was imported from the continent even earlier.

A key focus for the study team was a re-examination of the work of Ralegh Radford, who excavated the site in the 1950s and 1960s. Dr Radford claimed to have discovered Britain’s earliest Christian cemetery as well as the site of King Arthur’s grave, allegedly located by monks in 1191.

However, on re-examining the excavation records Gilchrist argues that this feature was merely a pit and its identification as Arthur’s grave was based entirely on medieval accounts of the excavation.

The disastrous fire of 1184 had left the monks with the problem of rebuilding with little resource and no major relics to attract pilgrims. The solution was the identification of Glastonbury as the legendary isle of Avalon and the supposed discovery of the grave of Arthur and Guinevere, conveniently found together with a leaden burial cross bearing a Latin inscription naming the king and identifying Glastonbury as Avalon.

The Burial Cross of King Arthur has been lost for centuries, but Gilchrist says that images suggest it was a 12th-century forgery based on an Anglo-Saxon original.

Gilchrists argues that the pit discovered by Ralegh Radford that he claimed to be Arthur’s “grave” has now been found to contain material from the 11th to the 15th centuries, with no evidence whatsoever to link it to the mythical king.

Ralegh Radford may have been "clouded" by the Glastonbury legends but it is fair to say he did not have the "luxury" of 21st-century technology.

Gilchrist could find no early accounts of a special tree in the abbey, and no evidence for the "Holy Thorn" before the 17th-century. The gnarled thorn now seen in the grounds is nothing more than a common hawthorn which naturally flowers in midsummer and midwinter.

The 12th-century historian, William of Malmesbury, wrote a description of an ancient wooden church which Gilchrist believes he clearly saw, probably an Anglo-Saxon wooden church, which could have dated back to the 7th-century but of course at that time William had no means of securely dating the building.

However, in William's original account he was careful to say that he had only been told that it was built by Christ’s disciples. Later versions of William's work has had much additional material inserted, probably by the monks retrofitting an ancient history to further boost their status.

Gilchrist concluded; "This project has rewritten the history of Glastonbury Abbey." 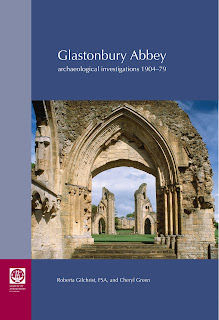 (Society of Antiquaries of London, 2015)