The Tomb of King Arthur Discovered in Shropshire

The Real King Arthur Thrice Discovered: Book II
Three books are being published this year each promising to reveal the true identity of the real King Arthur: he was a Yorkshireman; or did he come from Powys on the Marches; or he came from Gwent in south Wales:
In the first part we looked at Simon Keegan's book Pennine Dragon in which he argues for Arthwys ap Mar (Arthur of the Pennines), who ruled from York to Hadrian's Wall, as the legendary king Arthur who defeated the Saxons at the battle of Badon.

In this second part of The Real King Arthur Thrice Discovered we look at The Lost Tomb of King Arthur (Bear & Company, 19 May 2016), the culmination of author Graham Phillips 25 years of research into the Arthurian legend.

Part I - The Story So Far
A self-acclaimed historical detective and former radio journalist and broadcaster, Graham Phillips wrote five books between 1983 and 1995 with Martin Keatman, a partnership that started with the psychic adventure quest The Green Stone (1983) and ended with Robin Hood (1995). In the middle of this run of non-fiction works was King Arthur: The True Story (1992).

Phillips has since produced eight further books as sole author, from Search for the Grail (1995 – reissued as The Chalice of Magdalene in the US by Bear & Company in 2004), Merlin and the Discovery of Avalon in the New World (2005) to The End of Eden (2007). 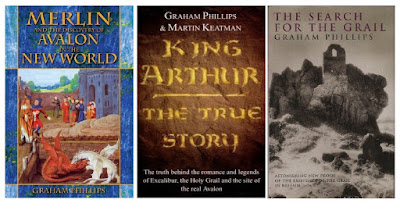 He has appeared on several television programmes, notably with Tony Robinson and Michael Wood, and more recently on Forbidden Histories with Jamie Theakston on the Yesterday channel (April 2016). Phillips is a regular speaker at alternative conferences such as the Glastonbury Symposium (2015) and is scheduled for an appearance at Andrew Collin's Origins Conference later this year.

The publisher's blurb claims that Phillips, using new translations of primary source material, shows King Arthur was a real man, and by using a 'wealth of literary and scientific evidence' has identified Camelot as a real place and the legendary Excalibur a real sword.

The book is quoted as one man’s journey to uncover the final resting place of the historical King Arthur; using literary research and the latest geophysics equipment Phillips claims to have pinpointed the exact location of Arthur’s tomb.

The people of Stafford were given a preview of Phillip's latest work in a talk by the author on Tuesday  26th April  2016  at St Chad's Church in Stafford, an event organised by Phillipa Smart's Magenta Circle. Being held on my doorstep I was compelled to attend this presentation but over two hours sitting on the pews in St Chads was not the most comfortable of evenings.

Two weeks earlier we were given a preview of Phillips latest discoveries. Jamie Theakston's Forbidden History (Yesterday Channel) screened In Search Of The Real King Arthur
on 8th April 2016. Theakston spent most of the program with Phillips on the trail of King Arthur in Shropshire. This program covered much of the same ground as the Magenta Circle talk.

Magenta Circle advertised the talk as “Best-selling author and historical detective Graham Phillips will be talking about his new book, The Lost Tomb of King Arthur, presenting compelling evidence that the fabled monarch was in fact a real-life historical figure who united the Britons to fight the invading Anglo-Saxons around 500 AD.

He will describe his exciting twenty-year quest to uncover the truth behind the legends of Camelot, Excalibur and the Holy Grail. But most astonishing of all, he will reveal the location he believes King Arthur was buried. With the help of eminent archaeologists, and the latest scientific equipment, Graham has what he argues to be definitive proof that the body of a warrior buried with his shield – just as ancient manuscripts describe Arthur’s burial – lies in isolated countryside in the Midlands of England. A body that dates from the exact time Arthur is said to have lived.”

Phillips started the evening by recapping on his earlier work on King Arthur, covering much of the ground of King Arthur: The True Story (with Martin Keatman, 1992). In the opening session Phillips reiterated the three key points to his theory:
Taking each point in turn, firstly Phillips identifies Owain Ddantgwyn as the historic King Arthur based on the 'Denunciation of the Five Princes' contained in Chapters 28-36 of De Excidio Britanniae (The Ruin Of Britain) a 6th century text by Gildas. In Chapter 32 Gildas directs his tirade at Cuneglasus (Cynlas the Red):

“Why dost thou, also, wallow in the old filth of thy wickedness, from the years of thy youth, thou bear, rider of many, and driver of a chariot belonging to a bear's den, despiser of God and contemner of His decree, thou Cuneglas (meaning in the Roman tongue, thou tawny butcher)?” (Gildas: De Excidio Britanniae, trans & ed. Hugh Williams, Cymmrodorion, 1899).

Here Phillips places much emphasis on the word 'bear' and tells us that in Welsh the word translates as 'Arth', thus convincing himself that Gildas is making a reference to Cuneglasus who, as a descendant of Arthur, has inherited the 'bear's chariot'.

At Chapter 33 Gildas directs his longest rant toward Maglocunus:

“And thou, the island dragon, who hast driven many of the tyrants mentioned previously, as well from life as from kingdom, thou last in my writing, first in wickedness, exceeding many in power and at the same time in malice, more liberal in giving, more excessive in sin, strong in arms, but
stronger in what destroys thy soul----thou Maglocunus.”

But for Phillips, the key here is Gildas' reference to Maglocunus defeat of his uncle:

“In the first years of thy youth, accompanied by soldiers of the bravest, whose countenance in battle appeared not very unlike that of young lions, didst thou not most bitterly crush thy uncle
the king with sword, and spear, and fire?”

Geoffrey of Monmouth tells us that it was Arthur’s own nephew, Mordred, who rebelled against him and brought down the king. In Welsh genealogical tracts the father of Cuneglasus and the uncle of Maelgwn (Maglocunus) is Owain Ddantgwyn.  According to Phillips then, the historic King Arthur is  Owain Ddantgwyn; 'Arthur' was the ‘battle name’ of Owain. QED.

Maglocunus then is identified as Mordred, the man who brought down the King. Phillips claims that the descendants of Maglocunus, the Dragon of the Island, went on to eventually rule all of Wales, hence the red dragon as the national emblem. While the descendants of Cuneglasus went on to rule Warwickshire, whose emblem today is the Bear.

Secondly, Philips argues that Owain and his son Cuneglasus were rulers of Powys. As Viroconium (Wroxeter) was the largest city in Powys, refortified by a powerful Post-Roman Dark Age ruler, it must have been its capital and therefore it must have been Owain's seat of power. As Owain has been identified as Arthur, Viroconium must have been, according to Phillips, the historic Camelot.
Archaeological evidence suggests Viroconium was deserted in the early 6th century which Phillips argues correlates with the date of the battle of Camlann, according to the Welsh Annals (Annals Cambriae) in 537AD, and the fall of Arthur.

Phillips third point is that according to a Dark Age poem The Berth in Shropshire is the burial place of the kings of Powys, and therefore Owain Ddwantgwyn (Arthur). A poem in the Red Book of Hergest, known as The Canu Heledd, identifies Eglwyseu Bassa (“The Churches of Bassa") as the resting place of Cynddylan, a 7th century Prince of Powys. Phillips argues that this can only be Baschurch in Shropshire:

“The Churches of Bassa is confined tonight,
for the heir of the Cyndrwynin,
the land of the grave of Cynddylan the Fair”

He claims the same Dark Age poem refers to Cynddylan as a descendant of Arthur. Presumably, here he means the 9th-century poem The Death Song of Cynddylan (Marwnad Cynddylan) which refers to the “the young whelps of great Arthur”.

But one big problem for Phillips theory is that Cuneglasus ruled from Rhos on the North Wales coast, not Powys. In 1997 it seems the fortress of Cynlas the Red, 6th century King of Rhos, was identified during excavations at Bryn Euryn on the east bank of the Conwy Estuary, in the township of Dineirth (The Bear's fortress). Excavations of the ramparts revealed the base of a massive defensive stone wall, thought to have originally stood at least 3m high.

Maglocunus (Maelgwn), the son of Cadwallon Lawhir ('Long Hand') brother of Owain Ddantgwyn, was said to have ruled from Deganwy, on the Creuddyn Peninsula by Llandudno and Rhos-on-Sea. According to the Welsh Annals, Maelgwn died of the “yellow plague” c.547. Tradition claims he was buried on Puffin Island (Priestholm) off the eastern tip of Anglesey.

This family was clearly located in Gwynedd, North Wales. At best Owain Ddantgwyn was probably a King of Rhos in the late 5th century, along way from Vironconium and Baschurch. Further, Cynddylan does not appear in the line of the rulers of Gwynedd.

However, these points are not new and have been the subject of much debate since the publication of King Arthur: The True Story in 1992. So much for the recap; the main points of his talk in Stafford was to be the site of Arthur's last battle at Camlann and the discovery of his tomb. We broke for the interval with the prospect of great revelation in the second part.

Unseen Roman baths to be unveiled

Parts of a Roman spa complex unseen for hundreds of years are being unveiled in a new visitor attraction.
The Bath Archway Project will bring the area to life with projections and sounds showing what the Roman spa experience was like.
The free exhibit will be based underneath a new World Heritage Centre and education site in York Street, Bath, and is set to open in the autumn.
>> BBC News South West - 13 June 2021