New Book: Britain in the Age of Arthur

A Military History
by Ilkka Syvanne 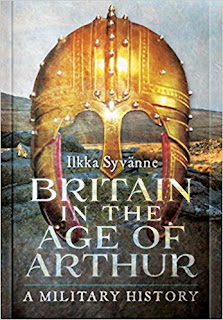 King Arthur is one of the most controversial topics of early British history. Are the legends based on a real historical figure or pure mythological invention? Ilkka Syvannes study breaks new ground, adopting a novel approach to the sources by starting with the assumption that Arthur existed and that Geoffrey of Monmouths account has preserved details of his career that are based on real events. He then interprets these by using common sense and the perspective of a specialist in late Roman military history to form a probable picture of what really happened during the period (roughly AD 400-550). This approach allows the author to test the entire literary evidence for the existence of Arthur to see if the supposed events of his career match what is known of the events of the period, the conclusion being that in general they do. Arthurs military career is set in the context of the wider military history of Britain and Europe in this period and along the way describes the nature of armies and warfare of the period.

Dr Ilkka Syvanne gained his doctorate in history in 2004 from Tampere University in his native Finland. His doctoral thesis was published as The Age of Hippotoxotai, Art of War in Roman Military Revival and Disaster 491-636 (Tampere University Press, Tampere 2004). He has also written numerous articles on late Roman/Byzantine warfare, and contributed seven entries for Blackwell's Encyclopaedia of the Roman Army (2011). From 2007 to 2016 he was Vice Chairman of the Finnish Society for Byzantine Studies. Dr Syvanne is An Affiliated Professor of the University of Haifa and lives in Kangasala, Finland.

Other books by Ilkka Syvanne available from Pen & Sword:

Military History of Late Rome 284-361 (16th September 2015)
The first volume, of 5 planned, covers the period 284-361, starting with recovery from the 'third-century crisis' and the formation of the Tetrarchy, providing a detailed account of the changes in organisation, equipment, strategy and tactics among both the Roman forces and her enemies in the relevant period, while also giving a detailed but accessible account of the campaigns and battles.

The Military History of Late Rome AS 361-395 (30th May 2017)
The second volume in the series gives the reader a comprehensive narrative of late Roman military history from AD 284-641.

Caracalla: A Military Biography (30th May 2017)
Ilkka Syvanne explains how the biased ancient sources in combination with the stern looking statues of the emperor have created a distorted image of the man and then reconstructs the actual events, particularly his military campaigns and reforms, to offer a balanced view of his reign