This weekend sees the annual Glastonbury Pilgrimages taking place when pilgrims will process down Glastonbury High Street and gather in the Abbey grounds to celebrate Mass.

The Broken Heart of Glastonbury
During the Late Medieval Period, Glastonbury had become a centre of pilgrimage, with an annual pilgrimage held on the 8th of September, to celebrate the birth of Our Lady. The halcyon days came crashing to an end on 15th November 1539, when the last abbot, Richard Whiting was executed on Glastonbury Tor, the Abbey wrecked and the ancient Shrine of Our Lady of Glastonbury lost.

On 5th December 1926, after an absence of nearly 400 years, the first Roman Catholic Mass was held in a church in Glastonbury since the Dissolution of the Abbey and the cruel murder of its frail old Abbot.

The small temporary Church built in 1926 led to the foundations of a new Church being laid in 1939, dedicated once again to Our Lady as a successor to the ancient Shrine at Glastonbury. This new church, St Mary's, The Shrine of Our Lady, stands just across the road from the ancient Abbey gates.

The first organised mass pilgrimage to Glastonbury was held in 1895 to celebrate the beatification of Abbot Richard Whiting, on the anniversary of his martyrdom when thousands of pilgrims climbed the Tor where Mass was held.

The modern concept of the Glastonbury Pilgrimage started in 1924 and took place after both World Wars and has been an annual event ever since. 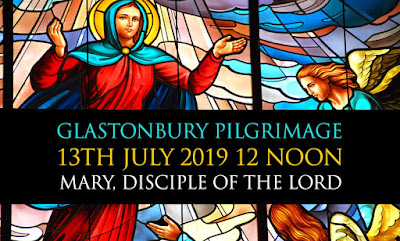 Friday 12 July
The Glastonbury Pilgrimage Association Annual Pilgrimage starts on Friday 12th July in celebration of Mary, Disciple of the Lord when a Vigil Mass will be in the Undercroft of the Lady Chapel at 6.00 pm.

Saturday 13 July
On Saturday 13th July events start at 9.30 am with the Orthodox Liturgy, celebrated in the Undercroft followed by a Solemn Celebrated Mass sung in the Nave of the Abbey Church at 12.00 noon. After lunch at 2.00pm there will be various stations for the Sacrament of Anointing and the Sacrament of Confession will be heard in a suitable venue to be announced. This is followed by the Procession of the Blessed Sacrament to the Abbey for Solemn Benediction in the Nave of the Abbey Church at 3.00pm. 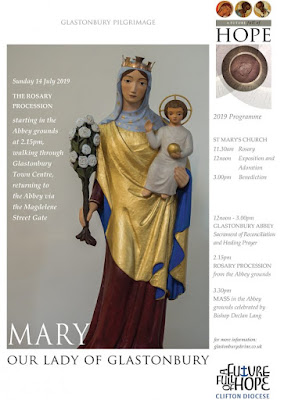 Sunday 14 July
On Sunday 14 July The Clifton Diocese Pilgrimage starts in St Mary's church, the Shrine of Our Lady, at 11.30am.

A procession will be made around the abbey grounds, then out into the High Street and back to the Abbey via the main entrance, in Magdalene Street culminating in Mass in the Abbey grounds at 3.30pm.