The Battle of Mount Badon

Having a passionate interest in Arthur since childhood, some 50 years ago, author Alistair Hall set off on a historical detective trail with the aim of solving one of the greatest British historical puzzles; was King Arthur simply a legend or did he actually exist?

Alistair is convinced that Arthur was real and that his book The Battle of Mount Badon: Ambrosius, Arthur and the Defence of Britain sets out to prove it. 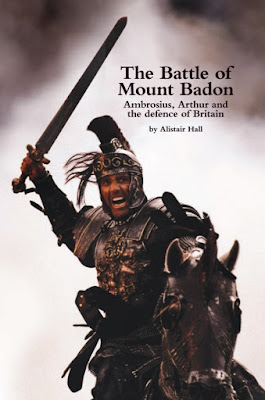 We know this film was inspired by the theory, currently pushed by Linda Malcor and John Matthews the “historical advisors” to the film, that the origin of the Arthurian legend can be found in Lucius Artorius Castus a Roman officer stationed in Britain in the 2nd century apparently in command of a troop of Sarmatian cavalry, a theory rejected by most Arthurians as utter bollocks; which seems odd why the author would choose this as his book cover to entice us in?

Why the author would chose to associate his book with this film which gave a dreadful reinterpretation of Arthur as the Roman officer is not an encouraging start.

Alastair Hall tells us that in the year 2000 he began to believe that he had identified a number of locations for King Arthur’s battles. He held back for another 20 years before putting pen to paper.

Following a long discussion on the ending of Roman Britain, the centrepiece of the book is the history of Britain 430 to 470 in which Hall asserts his claim to have discovered the true identity of Arthur, but he also rewrites history and provides a new structure and chronology. But he concedes that in reality this book is about the outcome of more complex events that occurred a century before; the ending of Roman Britain.

The author's claim to prove the existence of Arthur is a bold one indeed, and his forensic research, as he calls it, suggests that the received history of the 5th century is incorrectly dated by as much as a generation since these events occurred in the North and followed the Roman evacuation. The majority of historians date the Battle of Mount Badon, accepted as a real event recorded by Gildas and Bede, to within ten years either side of 500 AD. In this book Hall moves the date of Badon back by a generation to fit his revised chronology.

He also tampers with the accepted geography to relocate the landing of Hengist and Horsa in Kent 250 miles north to the Humber instead, associating Vortimer’s last battle with Arthur’s first even though they are recorded as separate events in the Historia Brittonum. The eleven battles of the Historia Brittonum, the Arthurian campaign, immediately follow occurring mainly, Hall argues, in Lincolnshire and Nottinghamshire culminating in the battle of Mount Badon at Bardon Hill in c.469.

Rising up from the Vale of the Trent, Bardon Hill dominates a region known as Charnwood Forest and the M1 road passes close by its summit, at 912 feet, the highest point on this motorway. Hall admits he was attracted to this hill as the site of Arthur's greatest battle simply because of the similarity of its name to Mount Badon. Sadly the heart of this hill has been ripped out and forms a massive quarry, the high quality granite used for many miles of road building. Yet, there is no more than a late legend to link Bardon Hill with the site of Arthur’s greatest victory.

Hall claims that through the centuries the story of the early Anglo-Saxon rebellion  and war has been misunderstood and misplaced. Bede recounted a tradition that the mythical progenitors of the Jutes,  Hengist and Horsa, landed in Kent but Hall claims that they were never that far south, but in fact on the east coast of England further north in Lincolnshire.

Hall identifies Arthur as Arthwys of the Pennines, son of Mor, and accordingly locates him in Elmet and as a result of his research claims that the historicity of the Dux Bellorum will no longer be in doubt.

Unfortunately the author has been influenced by tired old sources, Britannia: A History of Roman Britain by Sheppard Frere and Roman Britain and the English Settlements by R. G. Collingwood and J. N. L. Myers. Both now outdated.

And it's never a good sign when you see The Age of Arthur: A History of the British Isles from 350 to 650 by John Morris listed among the author's sources. Unfortunately the image of post-Roman Britain constructed by Morris has stuck with so many self-styled historical detectives who seek to identify Arthur’s battle sites fighting back the Anglo Saxon onslaught from the east. Modern studies of the English is moving away from the “slash and burn” rhetoric of Gildas, a model that influenced all later writers for centuries.

I didn't dislike this book but it brings nothing new to the Arthurian debate; the usual investigation into identifying the battle sites which typically commences with the ending of Roman Britain, an examination of the sources, with a typically adjusted chronology and relocated geography, on this ocassion centred around Lincoln, Doncaster and Derby, to suit the author's argument. Camboglanna is the site of the strife of Camlann, surprisingly outside the author's own locality. I was certainly not convinced by the author’s claims, he fails to present an assertive argument that Arthwys was Arthur; you need more than just a hunch that you’ve identified the real person.

After making such a grand entrance on the front cover, Artorius is not mentioned in the text at all.

At £25 for a copy, and only available from the publisher plus £3.50 delivery, this is not a cheap book. This will seriously limit the books distribution. Fortunately I downloaded a Kindle edition at a reduced price of £2.99 from Amazon.