Historic Figures of the Arthurian Era


Authenticating the Enemies and Allies of Britain's Post-Roman King

15th September 2009 saw the welcome publication in paperback of Frank D Reno's second Arthurian work Historic Figures of the Arthurian Era: Authenticating the Enemies and Allies of Britain's Post-Roman King. This book was published in first edition hardback in 1999, following Reno's earlier work The Historic King Arthur: Authenticating the Celtic Hero of Post-Roman Britain (1997). Some of us obsessive Arthur freaks couldn't wait for a paperback edition to be published and paid rather high prices for these two hardback books a few years ago, although at nearly £30 a piece the paperback editions don't exactly come cheap, but on saying that you do get a lot of Arthurian info for your money. If you are a fellow Arthurian klepto sufferer you'll have to have them, so put them on your Christmas wish list. 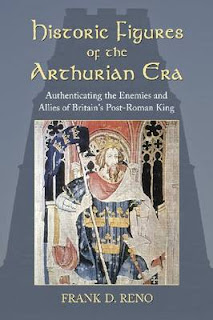 According to the Author's website, the title of this book is misleading, since in actuality scholars rightly claim that there was no Arthurian era in the fifth century. The content of Frank D Reno's second Arthurian book is more accurately described by the original working title, Ambrosius Aurelianus: Allies and Adversaries. Leon Fleuroit was probably the first in modern times to postulate that Ambrosius Aurelianus is a doublet of Riothamus; following Fleuroit, E.K. Chambers, among others, indicated that Arthur and Ambrosius are in all probability scribally corrupted names of the same persona.

Reno demonstrated in his first Arthurian book “The Historic King Arthur,” in attempting to separate fiction from history, that the true King Arthur was a Celtic king of post-Roman Britain who lived in the late fifth and early sixth century. This book is a further effort to authenticate the legendary Arthur as a historical Celtic king. In this work Reno examines the roles of six major figures of the period from AD 383 to 518: Vortimer, Vitalinus, Cunedda, Cerdic, Octha and Mordred in an attempt to unravel the mystery of Arthur's identity, which has proven to be a perennial problem for historians. The author provides an extensive analysis of Arthur's 12 battles as listed in the "Historia Brittonum", exploring not only the influences of the King's allies, but also the switch of allegiance by some Britons who joined forces with Arthur's English and German enemies. Providing suggested geographical locations for each of the battles, culminating in a proposed new site for Arthur's fateful battle at Camlann.

Table of Contents:
Prologue
1. New Perspectives of Ancient Insular History
2. Other Early Manuscripts
3. Riardd Ambrosius
4. Who's who: Ambosius's Father, the Superbus Tyrannus Vortigern.
5. Vortimer and Vitalinus: Arthurian Enigmas.
6. The Breach of Colours: Cunedda's Role in Civil War
7. The Breach of Colours: Romanitas Versus Cunedda's Progeny and the Saxons.
8. Arthur's Battle with the Saxons.
9. The Strife of Camlann
Epilogue
Appendix A: A Century and a Half of Dark-Age History
Appendix B: Two Tales of the Mabinogion
Notes
Glossary
Bibliography
Index

Reno's first Arthurian book discusses in detail who he considers to be the historical King Arthur of the 5th Century and how the story originated. 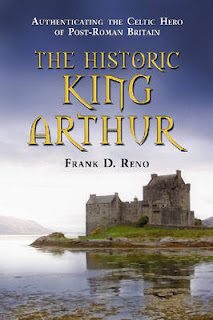 Through careful research of primary documents, Reno produces a picture of who he claims is the true Arthur. The author claims that Arthur reached power shortly after the Romans left Britain at the end of the fifth century and died at the Battle of Camlann. Reno does not dismiss Geoffrey of Monmouth's account totally out of hand as some scholars do, claiming Arthur did became king at 15 years of age, but under the name of Ambrosius Aurelianus who fought against the Saxons on the mainland and on the continent as Riothamus. Reno claims this accounts for the regeneration motif so closely tied to the mythical Arthur.

The Author's website states that The Historic King Arthur focuses upon laying the foundation for authenticating a historic Arthur of Britain. Containing twelve chapters, the first eight (approximately two-thirds of the book) create the under- pinnings for the hypothesis that the Roman equestrian Officer Lucius Artorius Castus was an authentic figure whose origin is found to the end of the second century, and whose name became conflated with a British king named Ambrosius Aurelianus of the fifth century.

This is yet another one of those books claiming to reveal the truth about King Arthur, identifying a triad of Arthur-Ambrosius-Riothamus as one warrior King, claiming he fought in Britain as Ambrosius Aurelianus and on the continent as Riothamus. The literary and archaeological evidence is examined in some detail, calibrating the Arthurian chronology of the source documents is discussed and he stresses the importance of differentiating between Continental Saxons and the Saxons in Britain. You may not agree with all Reno has to say on Arthur but he certainly puts forward a persuasive argument.

Table of Contents
Preface
1. Introduction
2. The Ancient Manuscripts
3. The Cardinal and Ordinal Years for the Arthurian Chronology
4. Hillforts and Roman Roads
5. The Geography of Mount Badon
6. The Geography of Camlann
7. Other Sites: Camelot and Tintagel
8. The Isle of Avalon: Arthur’s Resting Place
9. Ambrosius Aurelianus: History and Tradition
10. Riothamus: The Briton from Across the Ocean
11. Arthur: Historical and Literary Data
12. The Phoenix Arises
Appendix A: The Arthurian Chronolgy
Appendix B: Harleian Manuscript 3859
Glossary
Notes
Bibliography
Index


Visit the author's website based upon the texts and research of Frank D. Reno:

KING ARTHUR: THE NEMESIS OF HISTORY AND LEGEND

The Author's website provides an analytical breakdown, chapter by chapter, of the contents of each book. On this website, Reno discusses historical allusions and legendary accretions attached to Arthur, attempting to define the differences between legend and history. Reno argues that the legendary King Arthur has become melded with the historic “King Arthur” Lucius Artorius Castus, a Roman Officer posted in Britain at the end of the second century. Castus left Britain to fight on the Continent, echoing Riothamus (said by the 6th century historian Jordanes, to be "king of the Brittones") and Arthur's continental adventures in Geoffrey's story, these accounts became conflated with “Historic King Arthur” Ambrosius Aurelianus of the fifth century, and onward to the legendary King Arthur memorialised by Sir Thomas Malory’s Morte D’Arthur in the sixteenth century.

King Arthur is undoubtedly the most enigmatic hero in literature, whenever his name is mentioned, it is commonly associated with what is now referred to Geoffrey of Monmouth's 12th Century "pseudo- history" History of the Kings of Britain, but surprisingly Reno does not dismiss Geoffrey's account but uses it to assist in unravelling the confusions. The combining of the legendary King Arthur with a historic King Arthur has caused a great deal of confusion in chronology and distortion in the many Arthurian epithets: Arthus, Arthurex, Arcturus, Ursus (Bear), Pendragon, UterPendragon, Utherpendragon, and Riothamus.

However, neither of Reno's books will mark a definitive end of the quest for the historic “King Arthur” of the fifth century. Reno suggests that as public or private collections are studied, an even clearer picture will reveal the reality of Lucius Artorius Castus as “King” Arthur, and Ambrosius Aurelanius as a Briton/Celtic king. Reno is currently working on his third non-fiction book, an annotated paradigm of Arthurian history and legend, as a continuation of his first two books and various articles he has written.

Vitalinus/Guithelinus
Vitalinus appeared to be a minor character in British history, mentioned but twice in the Historia Brittonum, firstly 'son of Gloui' and a later reference to 'the discord between Vitalinus (Guithelinus) and Ambrosius'. Reno argues that far from being a minor part that Vitalinus plays, his was a role of major importance in Arthuriana.

Vortimer: Welsh Hero of the Arthurian Age
Vortimer is the "Over-Prince" who replaces his father Vortigern and defeats the Saxons in four crucial battles as recorded in the Historia Brittonum. Reno equates him with Cunedda, thus making him one of King Arthur's allies.

O, Ambrosius, Ambrosius! Wherefore art thou Arthur?
Littleton and Malcor identify Arthur with the 2nd Century Roman Officer Lucius Artorius Castus and argue that there is no King Arthur in fifth-century Britain. Reno embarks on a quest to discover a great fifth-century Briton who can be identified as an "Arthur."


Frank Reno and his wife Lavinia have just completed a 1000-page historical novel Ambrosius Aurelianus: Legacy of the Phoenix King which is preparation for publication. Occasionally, Frank D. Reno gives presentations and lectures on a variety of Arthurian aspects, in 2002 was invited to Britain to contribute information to the BBC documentary Arthur: King of the Britons. He lives in Colorado, USA.