This winter's storms hammered the UK and particularly Cornwall and the southwest. West Wales failed to escape the wrath of mother nature with the Ceredigion coast also receiving a battering in January by hurricane force winds. The Met Office issued a rare "red warning", the most severe level of threat, for "exceptionally strong winds" in west Wales.

Winds of over 100 mph battered the Welsh coast forcing the closure of roads, rail lines and schools. In Aberystwyth unusually high tides combined with the storm whipped up 50ft waves  reaching nearly as high as the buildings on the sea front. The promenade suffered with waves throwing shingle onto the promenade, battering the buildings on the front smashing the lower-floor windows of the seaside resorts, twisting railings, smashing through the sea wall and mangling the 1920s beach shelter. Twice the winter storms forced residents to be evacuated from buildings on the front. The huge storms and powerful winds that have battered the coast of Britain in recent weeks have caused years' worth of erosion and damage said to “have changed the coastline forever”.

Just up the coast at Borth the power of the storm stripped the sand from a beach revealing the remains of oak trees dating back to the Bronze Age that had been hidden for thousands of years. The tree stumps on the beach between Borth and Ynyslas are said by some to be responsible for the legend of "Cantre'r Gwaelod", which according to myth was a kingdom submerged under the waters of Cardigan Bay and often described as the "Welsh Atlantis". 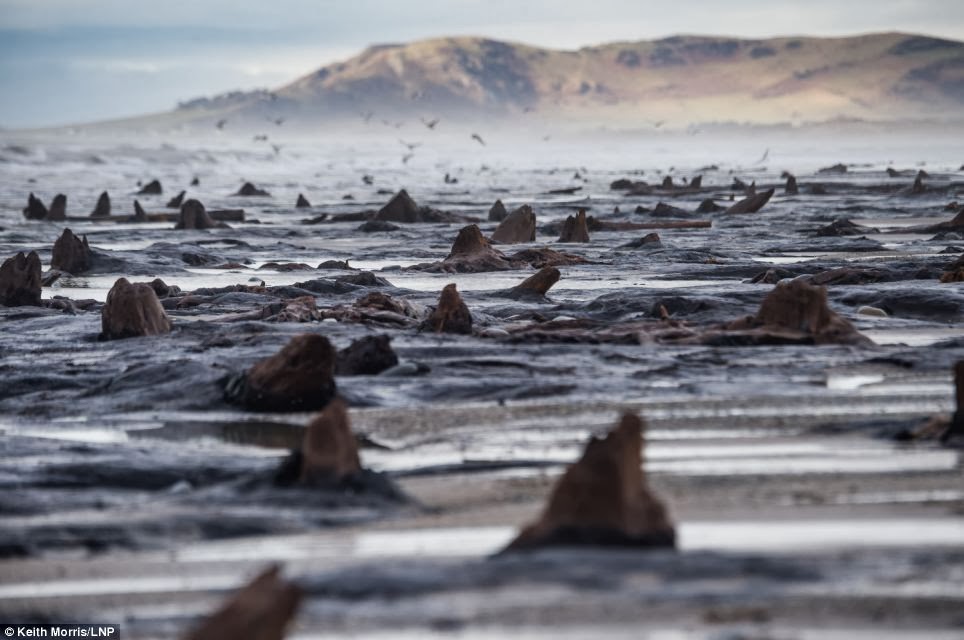 Before the storms recent photographs show a strip of pristine sand. Now the same spot shows a multitude of tree stumps of ancient oaks and pines dating back thousands of years spanning for miles.

The Mythical Land of Cantre'r Gwaelod, the Bottom Hundred, was said to be a fertile land with sixteen cities stretching twenty miles out to sea and some forty miles in length, from the estuary of the river Teifi at Cardigan in south-west Wales, to Ynys Enlli (Bardsey Island) off the tip of the Llŷn Peninsula in the North. 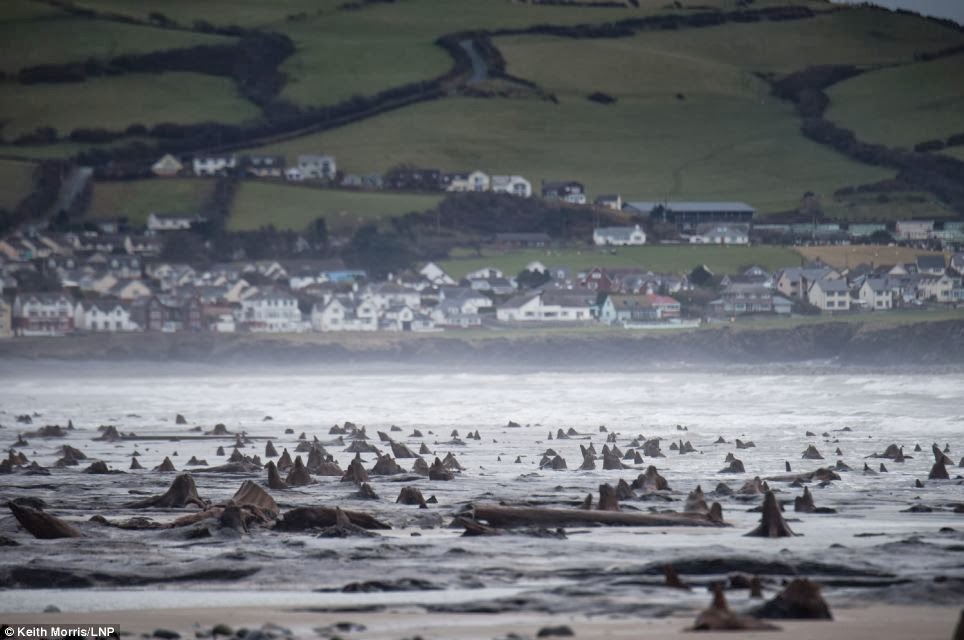 The land of Cantre'r Gwaelod was protected from the sea by a dyke and sluice gates. During the time when Gwyddno 'Longshanks' Garanhir  was Lord of the Cantred, the keeper of the dyke was a man named Seithenhin, who one night, after drinking too much, forgot to shut the sluice gates. The sea came rushing in and few of the inhabitants escaped.


Further pictures at Surreal seascape revealed by the storms -  Mail Online 20 February 2014
*
UPDATE 2020
Storm uncovers more of fabled sunken forest in Cardigan Bay
A forest which was buried more than 4,500 years ago may stretch further than thought after a summer storm uncovered more hidden trees. The prehistoric forest along Borth’s shoreline, on the mid-Wales coast, has become associated with a 17th century myth of a sunken civilization known as Cantre’r Gwaelod, or the Sunken Hundred.
In the summer Storm Francis exposed further evidence of the petrified forest 13 miles further south in Llanrhystud when large amounts of stones and shingle were washed away.
Source >> BBC News Wales 09 Sep 2020